The major event of the week was getting a visit from our local NGS organiser, resulting in provisional agreement that next year we will be opening for the National Garden Scheme. I’m in shock, I don’t think the full implications have sunk in. There are things I’ve been putting off that I’m going to have to get on and do. When we get nearer I have a feeling I’m going to be dreading it and regretting saying yes. Of course, the pandemic won’t have gone away so who knows how it will pan out, it seems the few gardens that are open now are requiring pre-booking, which would at least be more controllable. Ours is not a garden where you want fifty people at once.

Enough of that, it’s a good way off. What’s happening now? Lots, here’s a random half dozen.

One.
Agapanthus ‘Northern Star’. Dick Fulcher held the National Collection of Agapanthus and raised many new varieties. I think ‘Northern Star’ is the only one of his with Breeders Rights, though I may be wrong. It’s been a nice little earner for him I believe, and well deserved too. This plant has around 40 flower stems of a superb colour.

Two.
Crinum powellii. This has three flower stems coming up, making it a good year. As usual slugs have targeted it and the foliage is very ragged, but the flowers usually escape damage.

Three.
Cleome. I didn’t grow the two or three plants we have of this, they were a gift. (Thanks Becky) I might very well grow more next year, they’re mixed in with Ammi which I will certainly grow again. 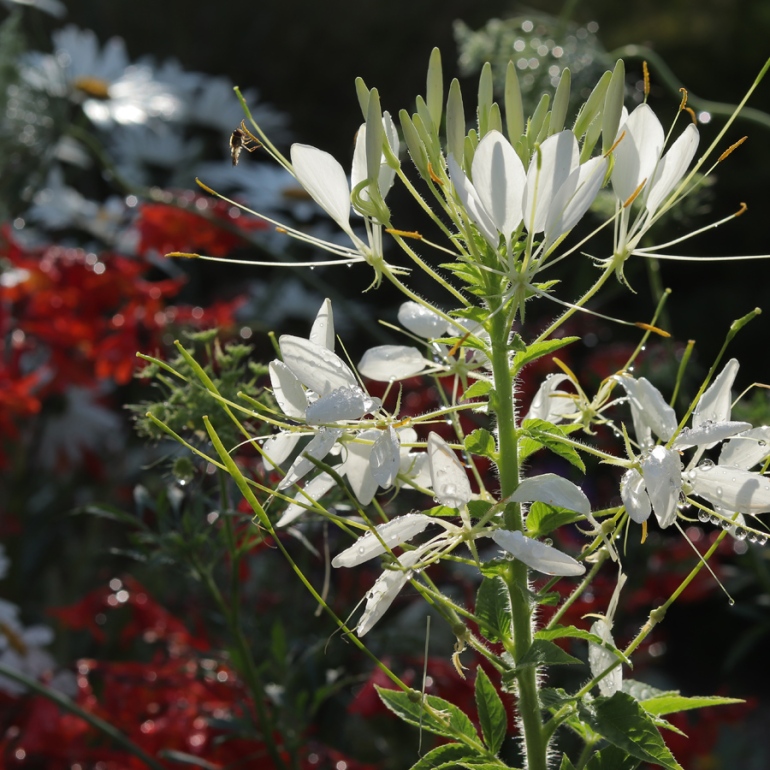 Four.
Cosmos atrosanguineus. I think this started as a gifted cutting. It’s really delivering this year with loads of blooms on it. I planted it in a fake chimney pot and it’s forever in need of watering.

Five.
Muehlenbeckia astonii. Shrubby tororaro, Wiggy wig bush. A divaricate shrub from New Zealand where it was all but wiped out by land clearance for agriculture. It was probably widespread in the dry scrublands of lowland and coastal eastern New Zealand but is now found in only a handful of places.
It has tiny heart shaped leaves up to 8mm wide and even tinier flowers, 3mm wide and greenish white. As the fruit develops the petals become fleshy and translucent, surrounding the fruit. My plant is female, as are most plants in cultivation, and without a male it will not produce viable seed.
My bush is around 1m high and wide, increasing slowly but steadily. It could get to 4m.

That was the description I used when I included it in a six two years ago. It has been growing quite quickly and is double the height and would be more if it hadn’t been cut back. It has quite a lot of flower on it just now, not that you’d notice it. There were a couple of wasps working the tiny flowers. I might try to collect some seeds and check whether they are viable for myself. 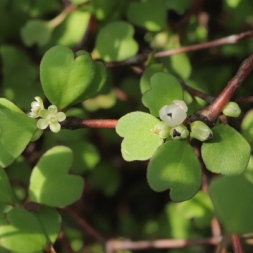 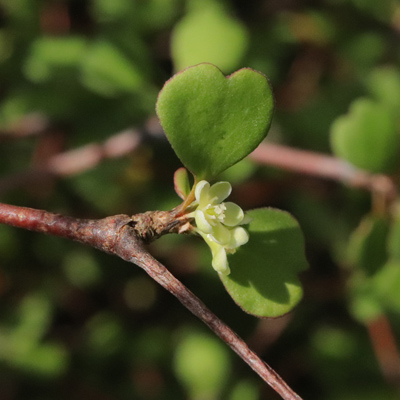 Six.
I gave my family apple tree a haircut yesterday. When I’ve summer pruned by the book, in the third week of August, it’s broken and made new growth, so I’ve taken to removing new growths back to about five inches, then shortening them again in early September, by which time it is too late for it to start into growth. It seems to be working and I probably should have thinned the fruit a little. This is the before picture, I didn’t take an after. Most of that rank growth is gone. 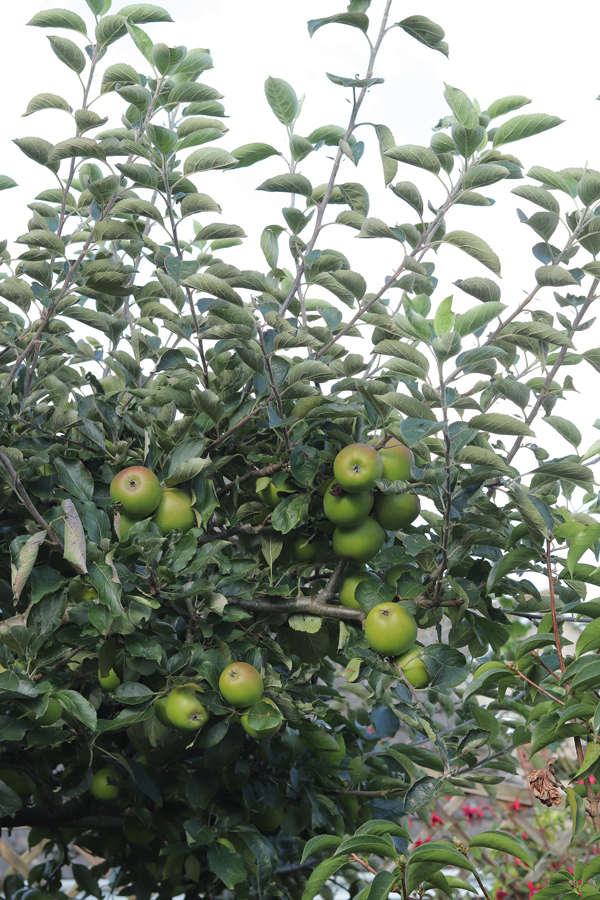 That’s my weekly offering. It’s going to be hot today and I should go and do some weeding on my allotment. It doesn’t hold much appeal I have to say. Perhaps I’ll just mooch about and plan replacing decking. I need to pick the plums, prune the other apple tree; OK, I’ll find something to do.
Links to other sixes as ever on the Propagator’s post. Have a good week.