If this weather had wanted to do one redeeming thing it could actually have given us some rain, which both garden and allotment need quite badly. All the heavy stuff has contrived to miss us or to fizzle out just short of us. I’m a weather radar junkie, there has been massive rainfall all around us, but not on us.

I’ve been replacing wooden decking at the back of the house; it’s been there for 15 years and has rotted in several places to the point it’s getting hazardous. It was laid over plain industrial quality paving slabs which are themselves laid on soil with no foundation. I toyed with the idea of brick paving or stone but it would have had to be excavated out and foundations laid, drains and manholes moved, so I wussed out. One of the few advantages of a plain modern house is that you’re not locked into using expensive materials to match an old property.

It was to be item number one, but progress has been slower than I’d hoped; isn’t it always?, so even though it’s the thing happening here on this particular saturday, I’m going to leave it out.

One.
Nerine masoniorum. I bought this from Tale Valley several years ago and it has ticked over, producing just a few blooms each year and looking scruffy or dead the rest of the year. I repotted it and that’s helped, it’s still only in a 1 litre pot, but is looking very pretty right now. It needs a plain dark background which it certainly doesn’t have in the greenhouse, so I stood it in the garden for the shoot. It’s about nine inches tall.

Two.
Dahlia ‘Karma Choc’. The most meaningful engagement I have with this plant is when I’m trying to take pictures of it. As a flower it contributes nothing to the general colourfulness of the garden, though individually it is striking and dramatic and it makes everything else look brighter. In a wider shot you can gauge whether the exposure was right by looking at everything else, close up it lacks context and confuses the light meter and the viewer.

Roscoea seedlings. I have four Roscoeas in the garden that I have bought and a nagging feeling that there should be another somewhere. I paid £10 for one of Keith Wiley’s hybrids from Wildside and spotted a mixed batch on Tale Valley Nursery’s stand at Rosemoor a few years back which I think wer a fiver, which struck me as very good value so I picked a good colour and brought it home. It produces seed which I have sown, and this clump here is mostly twenty or so seedlings, planted from 9cm pots right into a large clump of Anemone nemorosa ‘Robinsoniana’. It seems to have worked, the anemone died away before the Roscoeas started to come up and the Roscoeas will be long gone before the anemone reappears. The parent plant is in part shade, sun in the morning; these get shade most of the time. The parent is close to my big yew, so suffers from dryness, but it flowers well. These seedling plants appear happier but are not so free flowering so far. In the front middle of the clump is ‘Red Gurkha’, a form of Roscoea purpurea with no blue pigment in its flowers at all. I don’t have a clue what my parent plant was raised from and I don’t know if my seedlings are the result of crosses with my other Roscoeas or varied because their own parent is a mongrel. Suffice it to say that I think they are probably all Roscoea purpurea forms, there are some really good colours amongst them and they are easy to grow in humous rich soil that doesn’t get too dry. 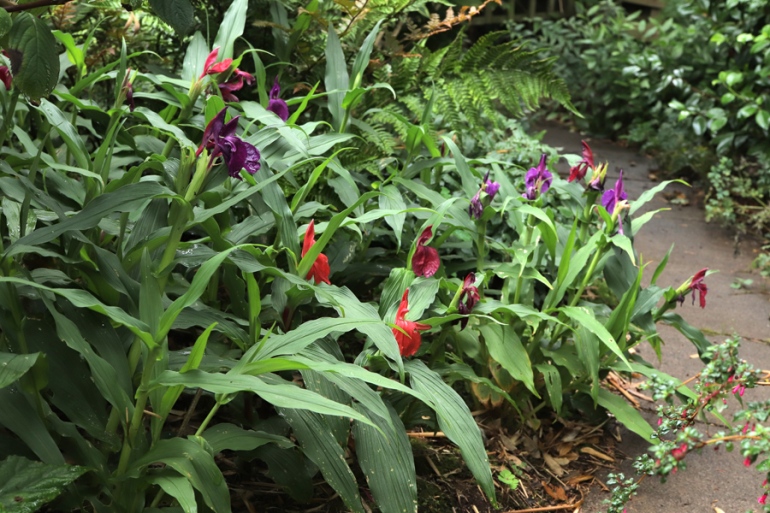 Four.
Across the path from the Roscoeas was a pot containing Codonopsis clematidea. It had finished flowering and died back, maybe partly because it was too dry, though they much prefer dry to wet. It was a tall pot, the better to keep it well drained in winter, with a narrow base, and it was tucked into the edge of my bamboo clump, from where it chose to launch itself onto the paving slab path. It didn’t end well. I have retrieved the pot shards and glued them back together again. I’ll make sure it’s on firmer and more level ground next time.

Five.
Ipomaea lobata, or Mina lobata as I usually call it, has appealed to me as a way of getting a second wave of interest from things that flower early then do nothing for the rest of the year. I’ve had a couple of seasons of planting small plants near to the things I want them to grow up only to see them struggle to compete with a large and well established plant. This year I potted up three 9cm pots into 7.5L pots, got them growing strongly and up to three feet tall before positioning the pot beside them plant I wanted to use for support. Not perfect, but much better, is my verdict. Here growing up Leptospermum rupestre and Trachelospermum asiaticum. 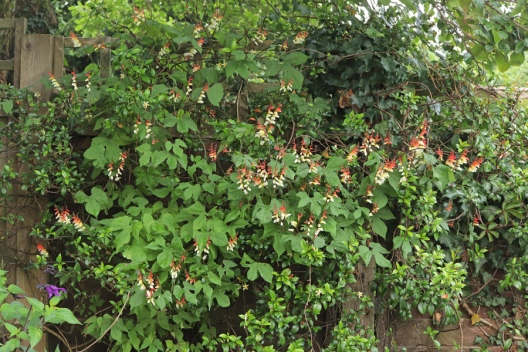 Six.
Hedychium densiflorum ‘Stephen’. Not the name it was obtained as but I’m fairly sure it’s what it is, or it may be a seedling from it. This is struggling in the root zone of my plum tree, probably to the detriment of both plum and ginger lily. I always maintain that I love Hedychiums but you wouldn’t know from looking at how badly I treat them. After many years I have finally got ‘Tara’ sorted out, pictures of that at a later date, but I need to find somewhere better for ‘Stephen’. ‘Stephen’ was collected in 1966 by Tony Schilling from the Dudh Kosi Valley in Eastern Nepal and named after his son. ‘Tara’ was named after his daughter. It is fully hardy.

Right, time to get this posted and resume my building works. I’m hoping for a dry day, get it wrapped up. Is it coffee time yet? You know where to go for the rest of today’s news, over at The Propagator’s place. I may see you there later.