I just did a count of the ferns I grow and found I had 23 forms growing in the ground plus another 10 in pots. There are a couple of wild native ferns around, nearly-weeds being allowed to masquerade as garden plants. That’s too many for one blog and besides, they don’t all look their best at the same time. I’ll be wildly unoriginal and start with a set of six.
When a gardener accumulates several closely related plants they are likely to be accused of “collecting” them and when the number exceeds thirty it is a charge that is not easy to convincingly refute, even to oneself. It is true that I am unlikely to pass by a decent fern section in a garden centre; it is equally true that I don’t usually buy anything, even though there may be varieties on offer that I don’t have. It’s not that they are bad plants or varieties, merely that they are too similar to something I already have. If I’m going to grow thirty different ferns, I want them to be as different from each other as possible, not to differ in some minute detail requiring a hand lens to discern.

So here goes with the first six. 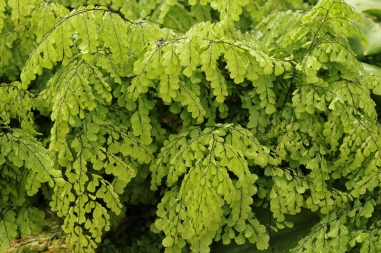 A fern that I have rarely seen offered for sale and having tried to grow it as a nursery plant, I can understand why. It is easy enough to propagate by division provided you take decent sized chunks; small pieces will usually fail. Given it’s fairly slow rate of spread that makes it an unattractive prospect for a nursery. It is also very reluctant to be grown from spores.
That aside, once established it is easy to grow in almost any shady situation, proving much tougher than its delicate appearance would suggest. It is evergreen, the fronds remaining in sufficiently good condition to fool you into leaving them until the new fronds push through in March-April. The new growth is extremely delicate and it is virtually impossible to cut out the old fronds without damaging them.
It spreads by a few inches each year, probably rather more given moisture in the growing season, and will go on indefinitely. A good sized clump in new growth is an absolute delight.

Like the Adiantum, this is a low growing, spreading fern that is very effective as ground cover. It occurs in the wild in Australia, New Zealand and South America, growing over a wide altitudinal range. The new growth is russet coloured and lasts for many weeks, the fronds 4-5 inches long. It forms a spreading carpet, a little sparse at first but becoming dense and smothering, occasionally building up mounds of growth as dead leaves and stems accumulate. In moist conditions the spread is quite rapid, a foot or more each season.

When I first planted this I regarded it as being on the borderline of hardiness, even in Cornwall. I almost lost it one winter but managed to salvage a piece and get it going again in a pot under cover. It is a measure of how much the climate has changed that it came through the last couple of winters with the fronds pretty much intact and no loss of its surface rhizomes at all.
In appearance it is like bracken in miniature; upright stems with the fine textured fronds held horizontally. It gets around a foot high, depending on available moisture, and spreads by means of thin wiry rhizomes that go out in all directions on the surface of the soil. These are easily capable of a couple of feet in a season but being shallow rooted, are simple to curtail. It makes a moderately dense clump, thinner towards the periphery and as large as you allow it to get.

This is much more your stereotypical fern, a shuttlecock shaped fountain of green leaves, classic shepherds crook tips until fully expanded. It is very common in its natural range in coniferous forest from Alaska to California to the extent that bloggers from that area will post pictures of their gardens in which for me the best thing is the lush and prolific fern growth, and not even mention them.
We have nothing quite like it on this side of the Atlantic; the distinctive ladder like arrangement of the single pinnate fronds that can get to five feet gives it a harder edged architectural quality than any of our larger ferns possess.

I have a plant of this selection as well as two plants of its parent species. Once again this is a “typical” fern in all respects bar one, that being that the new fronds which emerge in spring are brightly coloured in red and orange tones which they hold until well into summer. I cut the old leaves away from this plant after the new fronds had started to grow in late March, making life difficult for myself, but they were still in good condition. The two species plants have not started to unfurl their fronds yet so appear to run a month behind this form.
This will stay as a dense clump, spreading very slowly, with a height of 2-3 feet. It seems drought tolerant and undemanding. 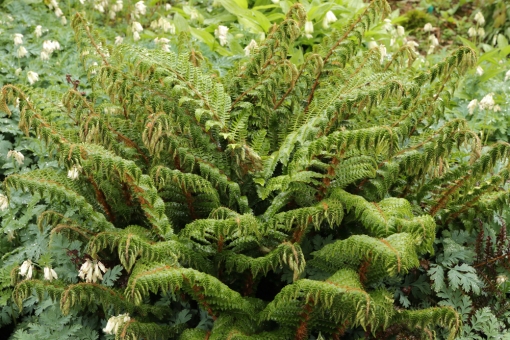 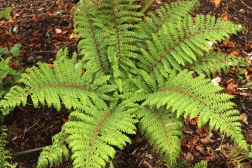 What sets this apart from the crowd is the glossiness of the upper surface of its fronds. When it comes up in spring the whole plant looks like it needs a drink, with every frond tip hanging limply. It soon straightens out to make a broad dish of lustrous emerald green foliage that carries through to the winter without ever looking anything less than vibrantly healthy. The shaggy stipe, especially as it emerges, is another big plus. My larger plant is around 2 feet high and 3 feet wide.

I’ll be back with more dreckly.