I’m off to another show at RHS Rosemoor today, the RCM Group Main Rhododendron and SW Branch Competitions. As usual, my main focus is the Camellias, which a month or so ago seemed likely to be all over by now. However, when I did my volunteer day at Mt Edgcumbe on Tuesday I was pleasantly surprised to find masses of bloom still going strong in their Camellia collection. The weather, yet again, is trying to spoil things, but we’ve had a benign week and I don’t doubt that all the competitors will have collected their precious blooms well in advance of storm Hannah’s arrival.

I hate getting really windy weather at this time of year, all the trees are just leafing out and will be looking a little forlorn by Sunday. I hope that’s the worst of it.

One.
Polygonatum hybridum ‘Betburg’. I moved this a year ago and it’s much happier in its new location. For some reason it put up a new shoot a few weeks back which has now turned green and has now produced a number of new shoots, taller, darker and with flowers. 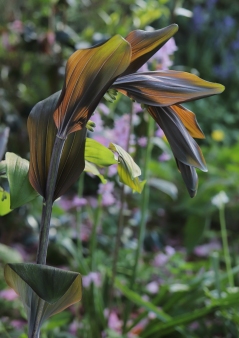 Two.
Years ago I was given a plant of what I came to think of as Rhododendron atlanticum. It set seed and I managed to grow two seedlings, both of which are in my garden and flowering now. This is much the better of the two and though I don’t think it is done any favours by the honesty behind it, I’ve left it but made a note to arrange a better background in future. It is beautifully fragrant.

Three.
Holboellia brachyandra HWJ1023. I featured this about a fortnight later than this last year. Apart from that, nothing is different; here is what I said about it then.
“Another Crûg plant, collected by Wynn-Jones and Dan Hinkley on Fan-si-pan, North Vietnam’s highest mountain. Mine doesn’t resemble the description in Hinkley’s book and I think is probably seed raised from fruit on their first generation plants. Mine doesn’t set seed, not having another plant to pollinate it. It is monoecious, with separate male and female flowers on the same plant. The females are slightly larger, with sepals (it being sepals not petals that are its ornamental feature) up to 2.5cm long, barely a third the size that Hinkley claims. They are very pale lilac in colour, the males a little darker and more bell shaped. There is quite a strong perfume, pleasant to my nostrils but please don’t ask me to be your guide when it comes to scent. Of Cantaloupe melon, according to one writer; I wouldn’t know, I don’t do melons.
There are very few evergreen climbers; if you want one, this has to be one to consider.”

It’s a fabulous thing and I’ve seen pictures of other plants of the same species that are different enough to make me wonder about buying another so that I’d stand a chance of getting seed. But then, what would I do with loads of seedlings of it? 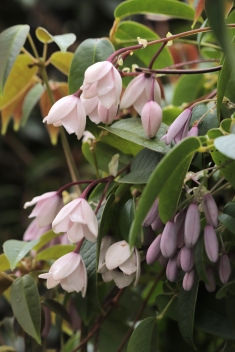 Four.
Camassia quamash. I included Camassia leichtlinii last week and it is still flowering. This is a smaller species, about 30cm tall, and it flowers a fortnight later with darker blue flowers than my form of C. leichtlinii. On the whole I would say it’s a much better plant and I planted a pot of it elsewhere last year which I haven’t noticed flowering this year. I should probably get some more bulbs of it in the autumn. 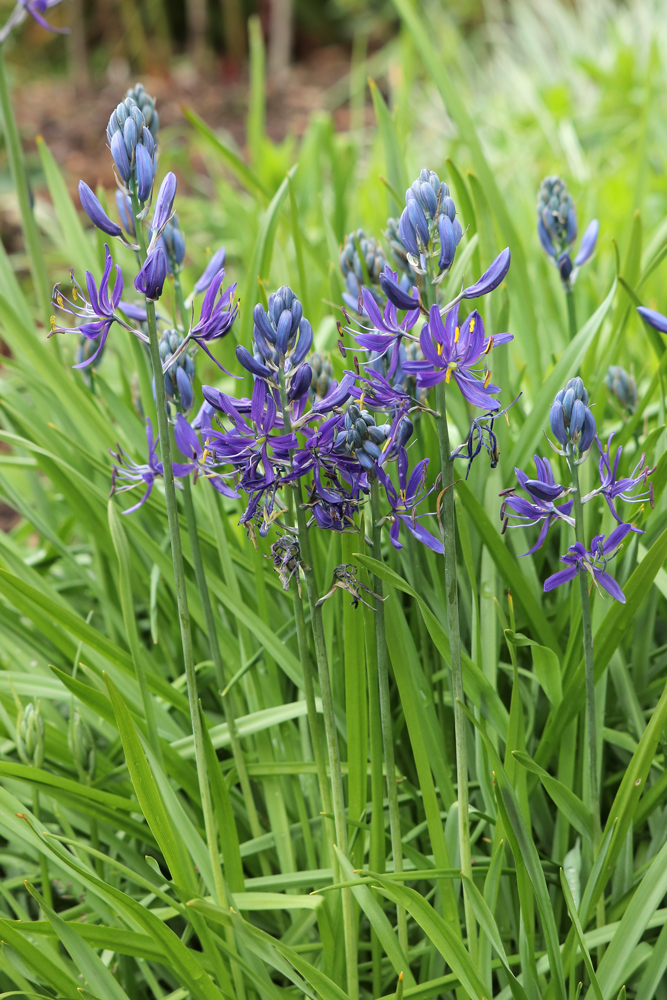 Five.
Schefflera taiwaniana. I reported on taking a couple of cuttings of my Schefflera in December (here) and I’m very pleased to find that both have rooted well. I potted them up today into 1L pots. 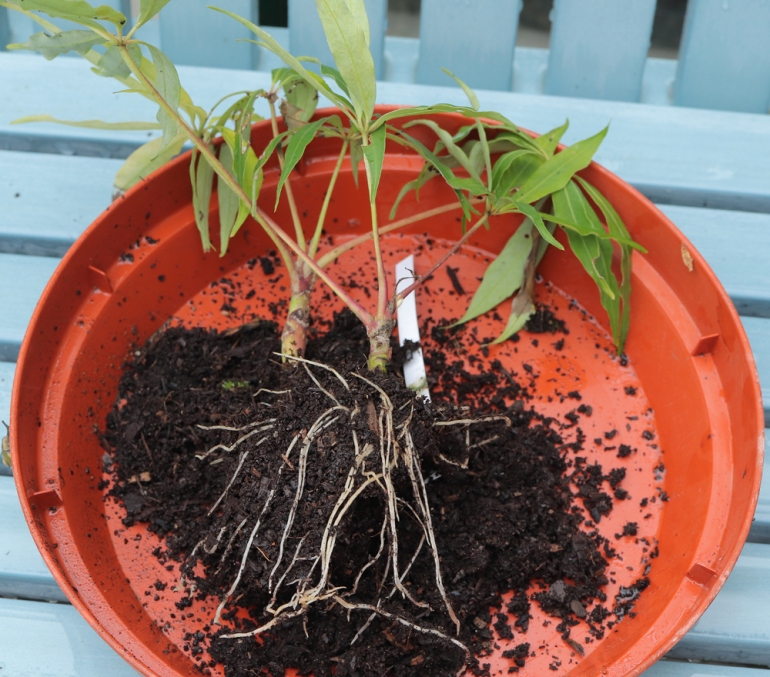 Six.
Athyrium nipponicum ‘Burgundy Glow’. Ferns are wonderful plants and I love them but there’s no denying the fact that a lot of them are very similar to our native male fern. I think that if you want to reduce the risk of becoming bored with them it is important to seek out as wide a range of forms and colours as possible rather than getting a bunch of similar ones and trying to convince yourself that the differences between them are greater than they are. Not all forms of the Japanese painted fern have the robust constitution that ‘Burgundy Glow’ possesses so it is a good choice. I have it in dryish shade where it is liable to go summer dormant in a year like last year. It is wholly deciduous, coming up afresh in spring.

Right. I have to rush. Not looking forward to the drive up to Rosemoor, it’ll be wild up on the moors. From inside, looking out, it’s a beautiful day. I’ll be back later to read all the other sixes, links as ever from The Propagator’s comments section.