There’s a mini-digger parked up on next doors drive, shortly to go into action to remove most of the soil from their front garden, to be replaced by gravel so they can park their vehicles. I’m finding it hard to see it as progress but maybe I’m just a grumpy old codger.

Hey ho, where was I. Oh, plants, those green things with coloured bits on them. You want six of them? Happy to oblige.

One.
Verbena officinalis var. grandiflora ‘Bampton’. You can barely see the flowers on this, they’re so small, so what is straight Verbena officinalis like? I think I’d have to say this is more about the foliage than the flowers. Purple, with something of the airiness of V. bonariensis but much smaller. It’s seeding around a bit, and comes true. It was given to me, thank you C. I have given one small plant to someone else. And so it goes on.

Two.
Another gift. To them that have shall be given, plants in my case. This is Crocosmia ‘Paul’s Best Yellow’. It was raised by plant breeder Ken Ridgely, about whom I know nothing other than that he raised this and the red variety ‘Hellfire’, not that I have that yet but it’s a better red than ‘Lucifer’ and stands up according to someone I know. 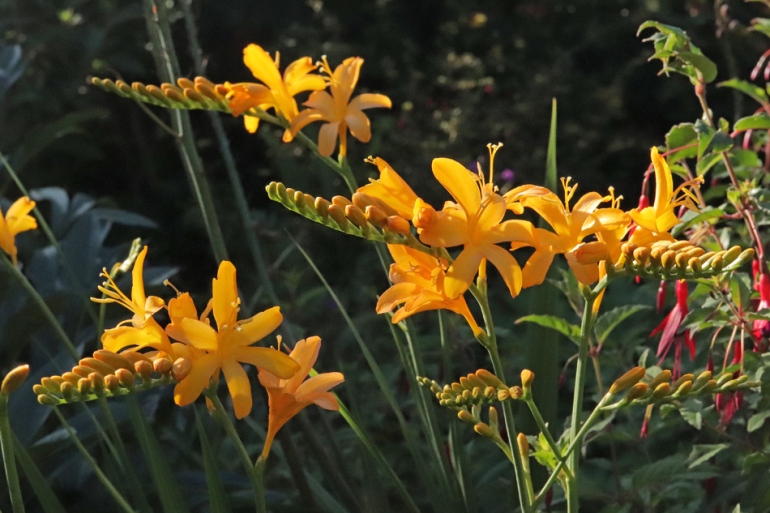 Three.
One of my recent shopping sprees netted me Alstroemeria ‘Summer Break’, budded but not in flower. It is now and I haven’t changed my mind, it’s a keeper. It’s going to replace my hideously clashing ‘Indian Summer’ amongst the pink stuff out the back. I’m growing it on a bit before putting it into its intended big pot.

Four.
Tagetes ‘Cinnabar’. This came up on one of The Propagator’s sixes a couple of seasons back. I got seed in 2019 from HPS and grew it last year, collected lots of seed and am growing it this year and will collect more seed in due course. It’s tall and pretty fabulous. I’ll be putting seed of it onto my seed list, which might conceivably have passed you by, so I’ll give it a plug.

Five.
Geranium ‘Nimbus’. I was going to put in a double Geranium pratense variety but didn’t get much of a photo and don’t know its name; and I considered G. oxonianum, which though it’s basically a weed, is pretty and looks nice under my bamboo where nothing else will grow. I settled on this though, because it’s doing very well this year and is one of my favourite Geraniums. Plain soft blue flowers and finely cut leaves, ambles about over and through other plants. It sets viable seed, I’ve raised plants from it, but they don’t have such fine foliage and they’ve not flowered yet. It hasn’t produced any self sown seedlings yet as far as I know.

Six.
Hydrangea macrophylla ‘Izu-no-hana’. That translates as flower of Izu, this having been found growing in the wild on the Izu peninsular in Japan. It’s quite a strong grower and would make a bush at least 5 feet high and wide in good conditions. Mine struggles a bit because it’s in the root zone of a large Acer and gets too dry, but this year it’s done well. I prefer these more subtle, understated forms to the mophead types but they’re all excellent garden plants. It has both pink and blue flowers, and a lot in between.

The digger driver is greasing up his machine. I’m bracing myself to guard our boundary and permit no encroachment. There’s electricity, water, gas and telephone under their front garden, it’ll be a miracle if he doesn’t hit at least one of them. It would be nice to be able to get in the car and go out somewhere, come back when it’s all over, but I dare not.

I’ll come and have a look at other peoples sixes as a refuge, an escape to a preferable reality. Links in the usual place, Mr Propagator‘s.