I’m running late again, in that I am doing this on Saturday, when it’s supposed to be done, rather than on Friday. There’s a reason, involving cars and batteries, but let’s not go there.

The garden is dry but we have water. The nights have been cold all week but just above freezing. The world around here is getting a little busier but with very little sense of it returning to normal. I think what we used to think of as normal can be consigned to the history books. A new one will take a while to get established. I can’t help wondering what effect the noticeably cleaner air is having on the climate, less of a blanket on clear nights, fiercer sun by day?

Enough philosophy, give me some plants.

One.
Pelargonium ‘Pink Capricorn’. This is remarkable for the fact that it was left out all winter and is now flowering again. There is no way it would have survived even five years ago. I took a picture with my new iPhone just after 8pm yesterday and another with my “proper” camera this morning. The phone makes it look better , the camera is probably more accurate. Henceforth I get to choose. 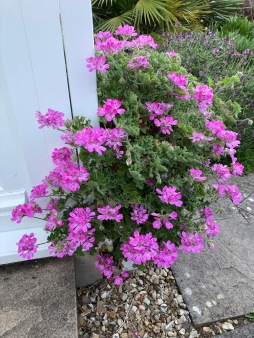 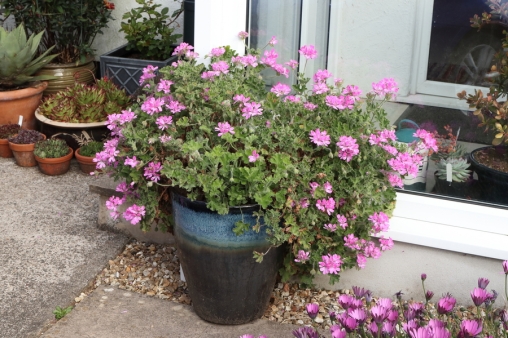 Two.
Cucumber ‘Carmen’. Cucumbers made it as the first thing to be harvested from this years vegetable sowings, closely followed by lettuce and radish. Tomatoes are staring to flower in the tunnel. We’re nearly five months into the year; it makes you realise how big a challenge complete self sufficiency would be. Good thing we have Morrisons. 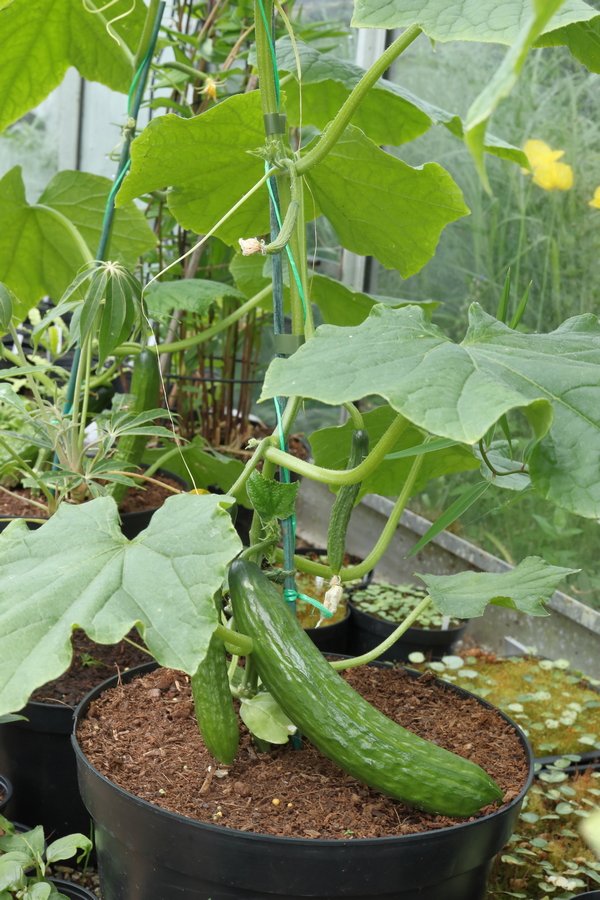 Three.
Euphorbia mellifera. Every two or three years I chop this down fairly brutally. It had finished flowering and the seeds were forming. I have a single backup seedling in case I kill it, but that hasn’t happened yet and I’ve been doing this for at least 25 years. All the flowered shoots, which were a metre or so tall, were cut to a few cms. The shoots I’ve left were the ones that had grown up underneath the main canopy; they are somewhat spindly but will keep it ticking over for now. I expect a mass of new shoots to start up in a few weeks and when they do I will cut the current crop off as well. 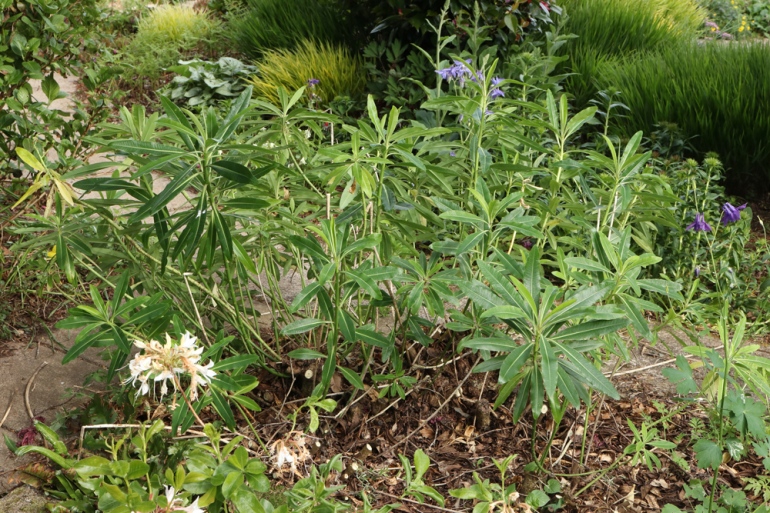 Four.
Iris Pacific Hybrid. That’s a cop out. I should go a’googling and remind myself about west coast irises but I want a coffee and time moves on and I never really wanted this iris anyway but it had an especially fine Hesperantha growing in with it, back when it was still Schizostylis so I bought it. It’s flowering quite well this year, though perhaps not quite up to last year, but after an average of two blooms a year for the last twenty I’m not complaining. 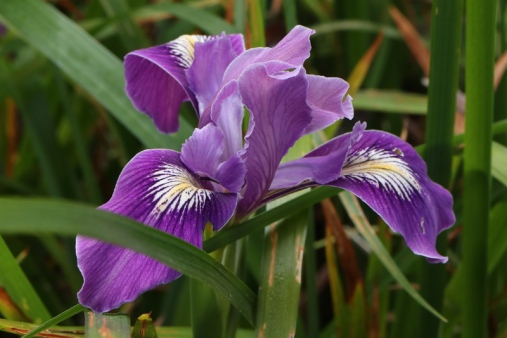 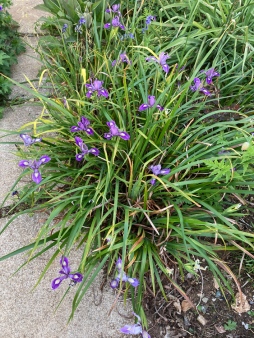 Five.
Leptospermum rupestre. I’m sure that a well grown specimen of this prostrate or weeping form of tea tree would be an impressive sight. I don’t have a well grown specimen. My attempt to get some height on it so it could weep impressively didn’t quite come off in that the weeping bits were supposed to cover up the trunk, and didn’t. Sue would have it gone yesterday, I kind of like its refusal to play by the rules. It’s  a Tasmanian endemic so this one’s for you Prue! 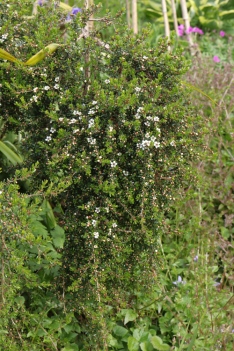 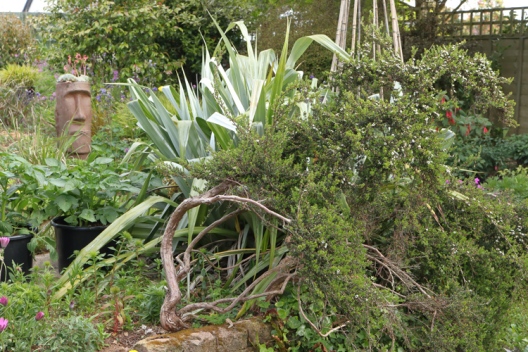 Six.
And this one is for Thistles and Kiwis. Arthropodium cirratum ‘Matapouri Bay’. I grew these from Hardy Plant seed last year. Seems longer ago than that, but sown 1/4/2019 and now in flower. I have them growing in a pot though I think they would probably be hardy enough to survive the cold planted in the garden. What I don’t think they would survive is the slugs. I mean, don’t you have slugs in New Zealand? 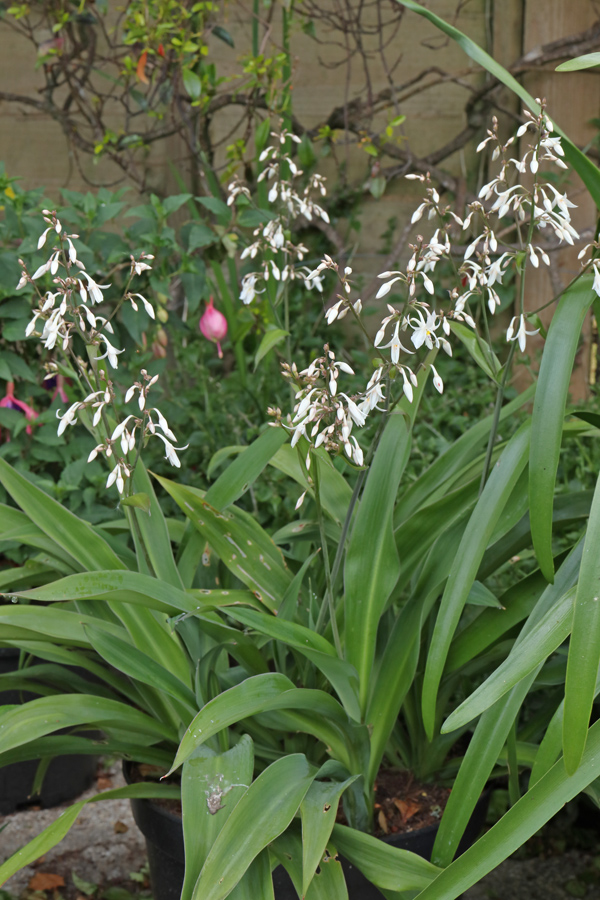 I need to get out there and start on todays list. Tie sweet peas, plant beans, turn compost heap, find time to follow the sixes……………………..