It started with the Thursday night clap. Most of our neighbours were in on that from about week two. Then one of my sisters set up a get together on Facebook messenger and that has become a Friday morning ritual. Then one of our neighbours suggested we have a bit of a socially distanced street party on friday so out we all went at 3pm, mostly wishing it would rain, but actually it went pretty well and half of them stayed out till who knows when. Bunting and all let me tell you. This is so not me that I feel like a Martian in my own street. Quaffing was no small part of it, and helped.

It disturbs my carefully laid plans, though the rain we woke to yesterday had a part to play. I didn’t get my peas and lettuce planted. I write myself lists of things to do because my brain is shot and I’d forget otherwise and I’m not halfway through the list I wrote for Thursday.

It was somewhat reassuring to see that the Propmeister was equally discombobulated this morning, confirmation we’re all in this together, or apart. Right, to business:

One.
Geranium nodosum. I planted out three plants of Geranium nodosum that have been under my feet in the tunnel since last year. I wish I knew their story; I want to think I grew them from seed that I liberated from a well known North Devon garden but they may have been given me by someone. A couple of them have now flowered and they are not wishy washy lilac-pink like the weedy ones I have seeding all over the place but a rich velvety dark purple. The flowers are small and borne one at a time but I see them as a big step in the right direction.

Two.
I love growing things from seed and had two pleasant surprises this morning with new things that had germinated since yesterday. I’ll save them for a different blog but one of the joys of seed raised plants is that you never know what you’re going to get. For years I had Papaver atlanticum self sowing moderately in the garden. Single orange poppies above attractive glaucous foliage. Last year one of them flowered semi-double. They’re short lived but it has survived to flower again this year and I’m hoping it will seed about too. From what I read online, collecting the seed and sowing it would be likely to fail. I may try anyway. 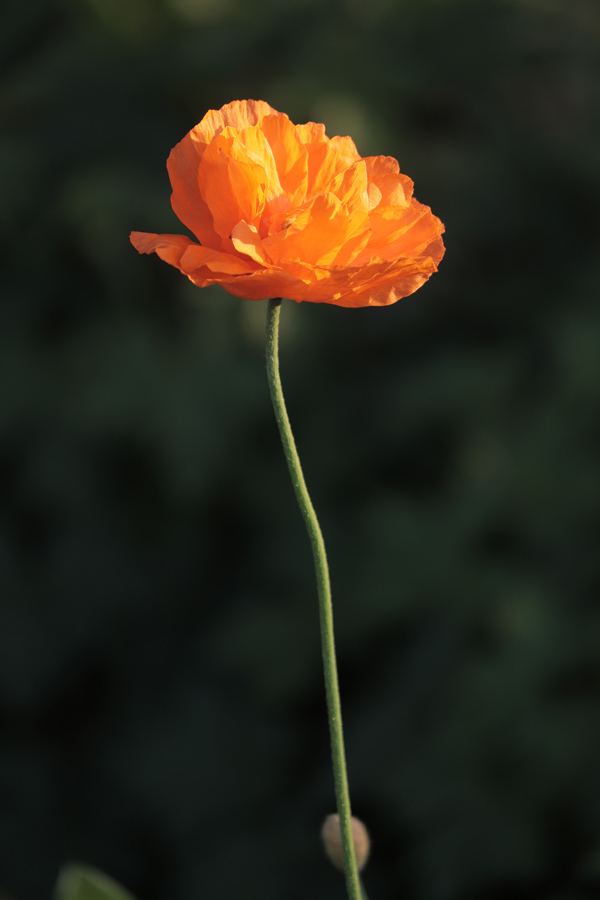 Three.
I have an ongoing love affair with ferns and seldom manage to resist anything I haven’t got when visiting nurseries, in person or online. This is Blechnum penna-marina, low and spreading; a little invasive in truth, but forgiven all its faults when it does this.

Four.
Maianthemum racemosum subsp. amplexicaule ‘Emily Moody’. According to Dan Hinkley the western (North American) form of Maianthemum racemosum is a tetraploid while the eastern form is diploid. American botanical sites are giving it subspecies status as amplexicaule without any reference to ploidy, the eastern form being M. racemosum subsp. racemosum. I have three forms of M. racemosum and this is the best. Just shy of four feet tall, imparting a strong lily of the valley fragrance, mostly untroubled by slugs, not much troubled by sawfly; cracking plant.

Four.
Maianthemum bifolium. Still in the shade and another Maianthemum, this is of diminutive stature compared to the last, at least in the vertical direction. I’ve had it a few years and there are signs this year that it has decided to spread itself out a bit, in that shoots are appearing in a yard wide circle all around the original clump. I can accommodate that but not if it wants to spread that much every year. I need to get down to it to see if it has fragrance. 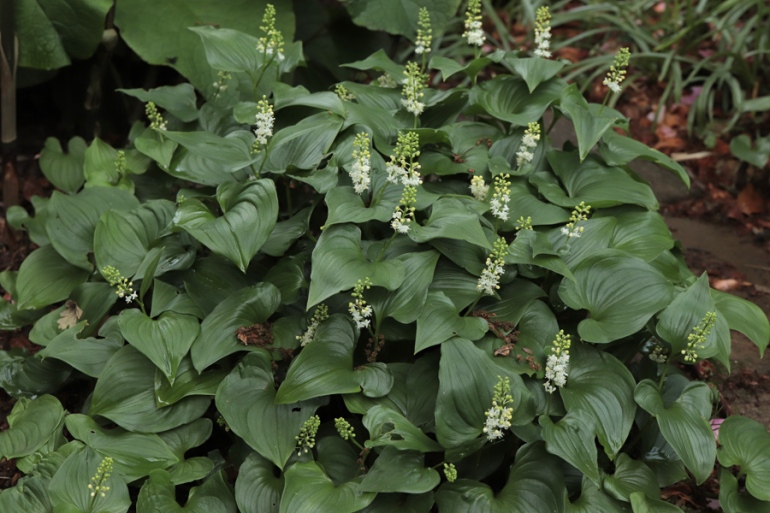 Six.
Camellia ‘Sweet Emily Kate’. One of the numerous Camellias I have growing in pots mainly because I don’t have space for them in the garden. This is a lutchuensis hybrid so should be scented, though I couldn’t get any yesterday. What sets it apart though is that it is growing barely six inches high and is around 30 inches across, so in the right place it might grow as ground cover or even perhaps weep over a wall. The flowers are small, 6-7cm across so just outside miniature category.

The bunting is still flying outside the window here, which I find slightly unsettling, like I’ve been drawn into one of those time-shift TV shows where I’m not sure when and where I am or whether the players are real or holograms. A stint on the allotment is needed to bring me down to earth. I’m not sure Bozzer will be giving the green light to street parties tomorrow and for once I agree with him.

Have a good week.