It’s that time of year when the chaos seems to build week on week. Everything is growing like mad which means seeds are sown, pricked off, potted up, potted on; pot plants get potted on, cuttings potted up, glasshouses emptied out, more plants bought, potted. It’s not like there was any spare space to start with so the paths fill up, the patio fills up.

Then it all seems to melt away again. Things get planted, old plants chucked out, potted display areas sorted out. The allotment fills up, the flower beds lose the gaps and a poor imitation of sanity returns.

I think this week was that turning point. I’d like to see it as a metaphor for the state of the nation but I’m not that much of an idiot.

One.
Glasshouse. I turf out the two benches from this greenhouse around now to make room for cucumbers and chillies. The benches were full with young plants that are now on the floor. There is now room for cucumbers and chillies. There will be, dreckly. I did a before and after picture, it’s very much a case of spot what’s moved rather than spot what’s missing. Better though, innit?

Two.
The side passage, aka the place with no name. In 2000 years time all the interesting archaeological finds will be in this midden area; that’s assuming there’s anyone left to look. The two glasshouse benches are along the fence with 12ft boards atop them, creating a small area of the vanishingly rare habitat known as SPACE. As you know, this has the gravity of a neutron star so it fills up in less than a nanosecond. The timber will be used to create more space and just the fact that it will not be where it is now will create yet more space. Under the bench there is now STORAGE space, which is every bit as useful as real SPACE and also has neutron star gravity.

Three.
Aphideus colemanii. Well it might be, the name’s not important. I potted on a plant of Primula sieboldii. Under its leaves it was infested with aphids. Time was I’d have sprayed them with chemical but things have moved on. Besides, close inspection reveals bloated, bronze coloured aphids, dead aphids, some with small round holes in their backs. The aphids have been parasitized and all I have to do is wait a few days for the entire population to collapse.

Four.
Blackcurrant cuttings. Plants at last. I was impressed last summer by how sweet Blackcurrant ‘Titania’ was compared to ‘Ben Connan’ and ‘Big Ben’ which I also grow. It may just have been that they were the last ones I picked but since I only have one bush of it I thought I’d propagate it. I put 12 cuttings about 9 inches long into two 1L deep pots and put them in the greenhouse. Yesterday I planted them out on my allotment, slightly nervous about planting more or less bare root plants in full leaf into very dry ground. I’m hoping for a few cloudy days (I know, be careful what you wish for) to get them established. I’ve planted them beside one of my rows of Dahlias with the intention of moving the dahlias next year. 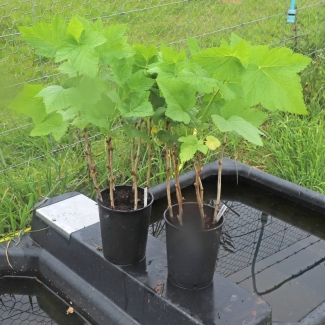 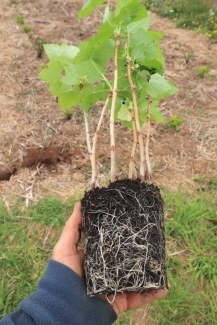 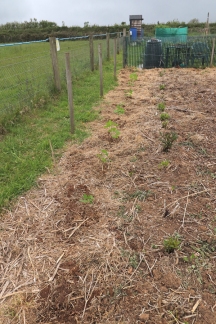 Five.
More candelabra primulas. Last week it was P. japonica ‘Apple Blossom’, which is still going well; this week a couple more, P. beesiana and P. prolifera. I’m particularly pleased about P. prolifera as I picked a seed pod or two from plants growing in the park where I volunteer a day a week and theirs have vanished this year. I may be able to reintroduce it. 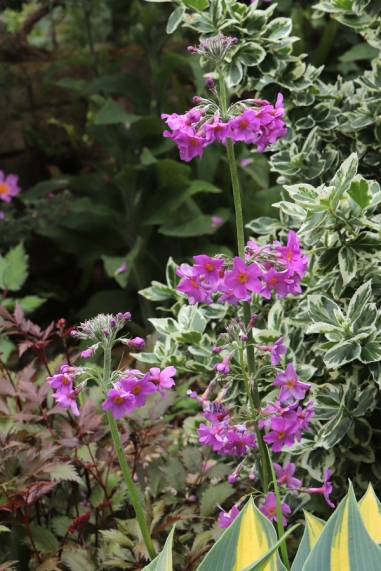 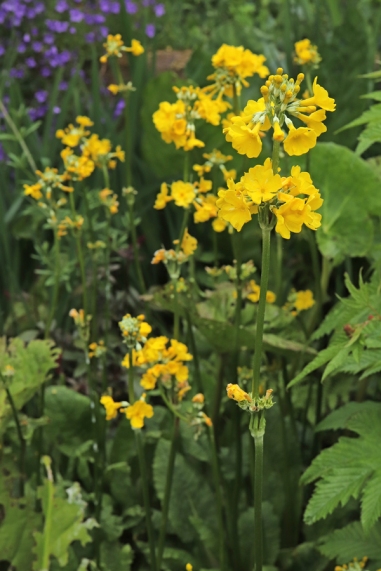 Six.
Disporum viridescens. This is the epitome of what in a former life we would have called a Ben plant. I sometimes wonder whether when E.H. Wilson or Reginald Farrer or George Forrest were collecting in Asia a hundred years ago they saw masses of these sorts of plants and passed them by as not being garden worthy. Perhaps they did collect them and they were grown by a handful of gardeners or fewer. As a genre they seem to feature large in the collections of modern plant collectors like the Wynn-Jones and Dan Hinckley.
Anyhow, it’s a modest but charming plant that gets around 18 inches tall and spreads at a manageable rate. The flowers are white with petals 2cm long. (Apologies for mixing measuring units) I have it in light shade and mediocre soil.

Right, I have timber to shift and a wealth of avoidance strategies in place to delay doing so. I think I’ll go prick off some Mellitis and I have a nice terracotta pot that I’ve just seen the perfect spot for, now what can I put in it?
The whole gamut of gallivanting gardeners that is the six on Saturday crowd are accessed via the portal of the comments section of Mr Prop’s blog. Join in and shrink the world.