It’s been a while since I posted anything about my allotment. We’ve had some very mild weather and things are maybe a little ahead of where they’d usually be, but not by much. Last year I sowed peas on 13 April; today I sowed this year’s, three days earlier.

I’d sown a strip of Italian rye as a green manure back in late august. It grew well before the winter stopped it and then made more growth up until I strimmed it a few weeks back. I had intended to cover it with Mypex but figured it would take a couple of months to kill the grass, so I opted to let it make more growth, strimmed it, then skimmed it off with a spade. I left the thin sods on the surface to dry then beat them with the back of the fork to shake off the soil. It will go on the compost heap. There’s still a bit more to skim off at the top of the strip; it’s been strimmed and is starting to come up again.

Most of the grass root is still in the soil where it will break down releasing nutrients; it’s fibrous non-perennial stuff that won’t shoot again. The grass has done its job of protecting the soil surface, improving soil structure and preventing leaching of nutrients during the winter.

I took out a shallow trench, the width of the spade and about two inches deep and sowed three rows of Hurst Greenshaft peas at two inch spacing. The soil from the second trench went into the first, covering the seeds. Once they were sown I levelled it off with the fork and covered it with plastic mesh to deter mice.

Elsewhere on the plot are things that you might raise an eyebrow at. There’s a fine patch of heart’s ease, Viola tricolor, which Sue presses to use in floral cards that she makes. There are still a few cabbages from last year. Huzarro is a hard and heavy red cabbage which has stood since autumn. Peel off the dried black layer and there is a perfect cabbage beneath, now going into coleslaw once more. I couldn’t get the same variety this season, hope the replacement is as good. 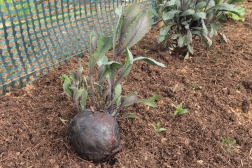 On the other plot, I checked today to see if there was any sign of life from my Dahlias; there wasn’t; I can put off cleaning them up for another week.

The autumn planted red onion sets, Electric, are looking pretty good and I planted out broad beans last week. I have lots of seedlings coming on in the greenhouse and must prick some more off tomorrow. Busy busy.