At this time of year bad weather causes a rapid slide into chaos and good weather puts the slide on hold without reversing it. Excellent weather for getting things done though. There always seem to be a lot of takers for the idea of autumn as favourite season. I’m not one of them; I prefer spring with its sense of renewal and getting better, autumn is the season of decline.

Still, it shouldn’t be difficult to find six reasons to be cheerful:

One.
Says he, then starts with what presumably should be seen as a pest, albeit unidentified. I took a few cuttings of Colletia hystrix, as you do, and put them under the mist. On one of my should be more regular than they are checks, I spotted this lot on one of the cuttings. I’m assuming that when they hatch the plan is to make a meal of the cutting. That probably won’t happen.

Two.
Camellia sinensis ‘Benibana-cha’. So called “Red Tea”. This is always the first of my Camellias to flower. It’s a very small plant in a 2 litre pot and it’s grown a bit better this year, the combination of warmth and feeding has suited it. The flowers are 1.5-2cm across and odorous in a neither unpleasant or pleasant way.

Three.
Cyclamen hederifolium. We have a tree of Chamaecyparis lawsoniana ‘Little Spire’ in the garden, notable only for the inappropriateness of its name. The bigger it gets, and its probably 25 feet or more now, the less well anything within the spread of its roots grows. This summer I was watering things around it to keep them alive, knowing the tree was grabbing 75% of it, to grow even bigger. I think Cyclamen hederifolium have a reasonable chance of succeeding, so I splashed out on several, including both pink and white flowered forms with solid silver leaves. The plan is that they’ll seed around and make a nice mottled leafy carpet. 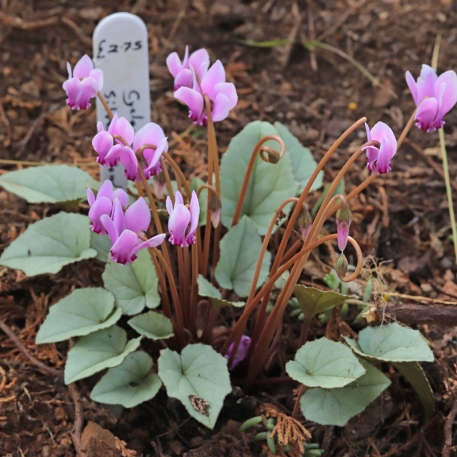 Four.
The same buying binge at the Plant Heritage sale at Rosemoor last Sunday netted me Molinia caerulea subsp. arundinacea ‘Transparent’. I’ve planted it to replace another quite tall grass that had been a bit of a mess ever since it was planted. I can’t even find its name now. I’m hoping this one will be an improvement, encouraged by another rather shorter variety of the same species I have elsewhere. I mean, it’s purple moor grass and Bodmin Moor is just up the road and covered in the stuff., why wouldn’t it thrive? There was a clue in the name to the fact that photographing it was going to be tricky.

Five.
The pink thing in the middle is the thing to which I would draw your attention. One of the things I’ve always admired at RHS Rosemoor is the collection of assorted pots that are on the veranda around the house. They must have quite a stash in a glasshouse somewhere, bringing them out there when they’re doing their thing. My stash is growing and includes this Nerine on steroids, or to give it its botanical name, x Amarine tubergenii ‘Zwanenburg’, making it a bigeneric hybrid between Amaryllis and Nerine. If I’m honest, it was a bit of a disappointment, being exactly like Nerine but about 50% bigger. Oddly, it’s better this year than it’s ever been, while both the Nerines and Amaryllis that I have are the worst ever.

Six.
The number six spot was scheduled to be Dahlia of the week, but the one I took pictures of was the one I started with at the beginning of August. Besides, the pictures I took of this aster have got the colour just about right for a change, so I thought I’d join the great Symphonic Trichum debate. I don’t have any idea what the variety is either, it’s always been known as “June’s Aster”, June being the lady from whose garden it came. I have ‘Purple Dome’, which is a quite different colour in the garden and identical on the computer screen. 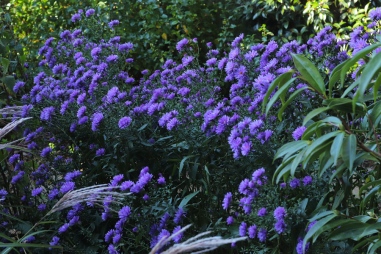 I’ve had a quick gander at The Propagator’s six and the links to other contributors are mounting up as usual. So interesting to get this snapshot of where everyone is each week. It’s too nice a day to be inside though, the garden and allotment beckon.