I just looked out the window and noticed how autumnal next door’s plum leaved thorn is looking; that seemed to happen overnight. It’s raining and it’s due to last all day.

The poor old garden has been given a right thrashing this week and there’s more to come. I don’t like wind. Even taking pictures is tricky, with plants whipping about and the sun in and out and showers waiting for me to venture out. We’ve had much needed prolonged heavy rain though, not that I’ve checked to see how far down it went. I’ve half heartedly started making a bit of room for the annual quart into a pint pot business of getting things under cover for winter. It’ll take a credible threat of frost to really get some action going, same as every year.

For now, there’s plenty flowering, if a little brown round the edges, and stuff happening in various ways. Here are six of them.

One.
Haemanthus albiflos is my favourite plant name. There was one on offer at the HPS sale back in May, which I bought. It had the name ‘Mrs Burree’ on it, which may be a cultivar or it may be the name of the person who donated it to the sale. Could even be both. I took its picture using focus stacking but couldn’t resist one of it in context. It’s pretty much what I look out on when I’m washing up.

Two.
Out the front. Our next door neighbour went into a home a few months back and sadly died on Monday. I’ve been doing his garden for years and out the front treated his and ours pretty much as one space. We don’t know what will happen now, presumably the house gets sold and we get new neighbours. There are some nice plants on his side, like Mahonia eurybracteata subsp. ganpinensis ‘Soft Caress’, which is just about to start flowering. When I looked it up, I found it has its own website. I guess if someone moves in who doesn’t want the plants, we can dig and move them at this time of year. His is/was left of the boundary line in this upstairs view, it’s actually at least double the size of our side, the picture is misleading.

Three.
I included my Bomarea edulis a couple of weeks ago and nice as it is, it had been gnawing at me that the one I really wanted was Bomarea multiflora. There’s a nursery half an hour away that I’d been meaning to visit and I looked at his plant list online. There it was. This was Tuesday evening. I looked at his opening times; shut on Wednesdays. Ridiculous. First thing Thursday I got to wander round for half an hour with not another soul about. Picked out a few things and gave the large cow bell on his shop counter a good swing. Treseder’s at Lockengate, a nursery name with a very fine pedigree. Have a look at his list, it’s pretty impressive. He’s feeling his way into mail order too. I came away with Bomarea, Fuchsia ‘Eruption’, Miscanthus ‘Morning Light’ and a couple of Cyclamen hederifolium. Picked up a couple of cheap Campanulas at another nursery on the way home. The cyclamen at the front were some Sue got a few days back. Good thing there’s a plant sale at Rosemoor on Sunday.

Four.
Apples. ‘Holstein’ and ‘Red Windsor’ to be specific. ‘Holstein’ is what I grafted onto my unhappy ‘Elstar’ some years back. ‘Holstein’ is a German variety, thought to have ‘Cox’ ancestry; beautiful apple, very scab resistant, which matters in Cornwall. I was afraid the wind would blow them all off and nearly picked them before it came. Hardly any have fallen, from either tree. ‘Red Windsor’ is on M9, which may not really be vigorous enough for Cornwall, it’s fruiting almost too well, or to put it another way, I didn’t thin it enough, but it’s not making much new growth. In spite of, or because of, the dry summer, my apples are way better than last year, twice as many and twice the size.

Five.
Hardy Begonias. People have been growing various forms of Begonia grandis outdoors for a long time. It gets up about 18 inches and flowers quite late in the year. There are pink and white flowered forms. In autumn it produces little bulbils, effectively the axillary buds detach themselves and fall to the ground and in spring when it comes up again, it is surrounded by small plants that have grown from the bulbils. Last year I bought Begonia ‘Garden Angel Blush’ and planted out one of my two plants of Begonia sikkimensis. Both survived the winter, though they were painfully slow to get going this year. I think they’re only really hardy if they are kept frost free under a sufficient layer of leafmould or suchlike; I’ll give them a good blanket this year. The Begonia sikkimensis in a pot shows its potential. I planted out Begonia luxurians this year too. It was very pot-bound but it’s done all right. I’ll cover that and see if it comes through. 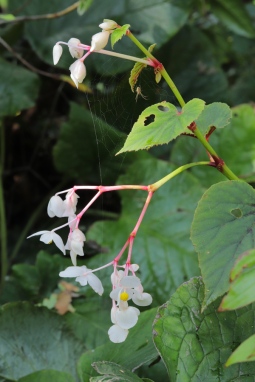 Six.
Dahlia of the week is ‘Orange Cushion’, the parent of most of my allotment seedlings that I might have occasionally mentioned. I dead head regularly but tagged a few to leave for seed. They’re nearly ready, see if we get a couple of dry days next week. They’ll get sown next spring. 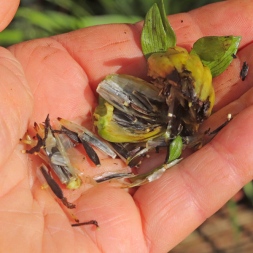 That’s it again. I was going to do Impatiens omeiana, I’m not sure which of the above six I missed on the first count. It’ll be better next week.

A rainy day is the perfect excuse to make a coffee and settle in to reading all the six on Saturday posts from all over. It’s like having your garden open each week and getting mostly the same people visiting and you don’t have to worry about the weather or baking cakes or parking or people nicking cuttings. Plus you can go visit lots of other gardens at the same time as your own is open. It’s like magic.

The gateway for all this fun is The Propagator, the host with the most.