I don’t know how many different plants I grow, it’s several, if not more. Some are rarities, some are not. Some are big and bold and brash, some so restrained they’re hard to spot. I’m a gardener, I grow plants; for me, two different plants are more interesting than two the same.

Each of us has a different list of elements for what constitutes a good garden, and for each of us the prioritising of the list is different. For me it would depend on the mood I was in when you asked the question. Variety and colour generally occupy first and second slots on my list, usually in that order.

Variety means there’s always something happening, always a reason to go and see how or whether something is coming along. Colour is for me one of nature’s greatest gifts, the more so for being, or at least seeming, like an unnecessary extravagance. Grasses get along just fine without bright colours, why do Dahlias need such gaudery? And why does it seem universally true that when we are surrounded by flowers, be it tulip fields, desert flowers, a field of poppies or the National Collection of Dahlias; our mood is lifted by the experience. We’re not bees, it should mean nothing to us.

One.
Time to cut to the chase. Arthropodium candidum ‘Little Lilia’. Looks rather like the spider plant in the porch, but more compact. Having visited both, I’m vulnerable to the charms of any plant from New Zealand or Tasmania, the former in this case. Bodmin Nursery, where I was surprised to find this, often surprises me with something unexpected. I think I will keep it in a pot and put it under cover for the winter.

Two.
A view. The longest axis of our garden. You’re facing north-west in this picture, with much shadier areas just out of shot to left and right. This strip gets sun for a lot of the day. Dahlias provide vivid colour for a long time, supported by Geranium ‘Rozanne’, Fuchsias, Salvias and plenty of coloured foliage. Herman (the head) needs a new wig. Some of the Dahlias over by the tunnel are 6 feet tall, if they were in the right place they’d hide the tunnel. 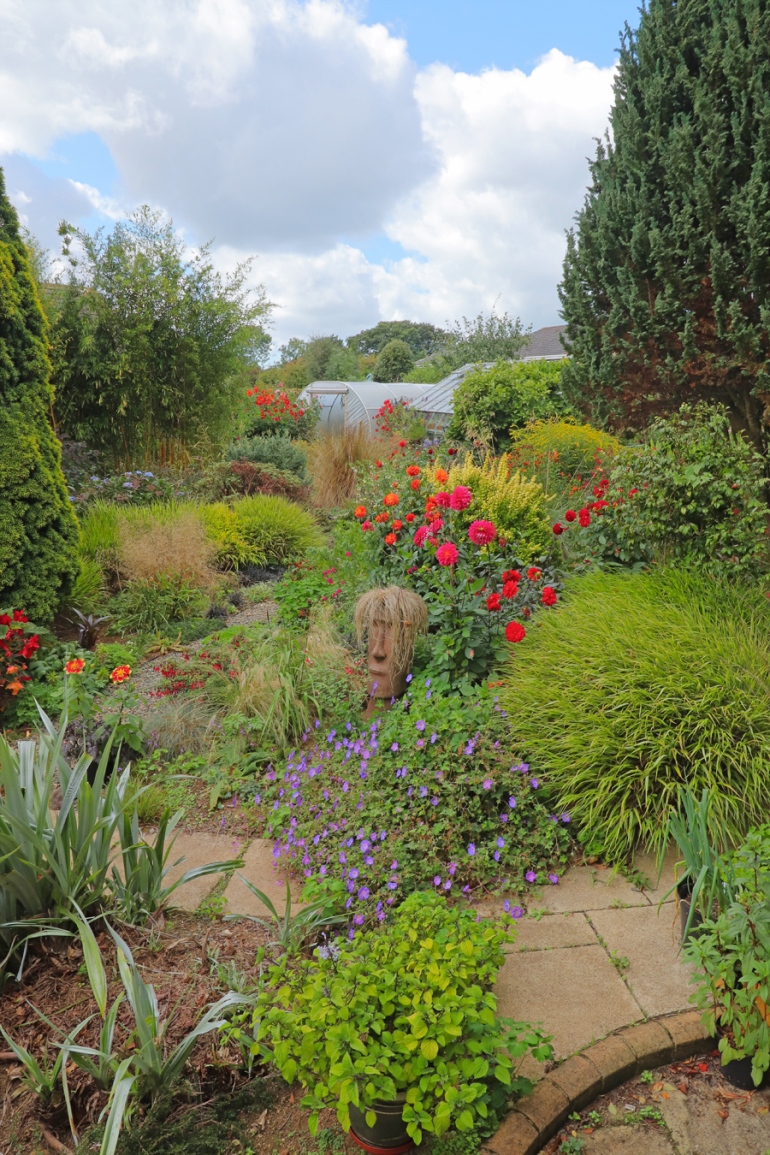 Three.
Some of the begonias we had last year survived the winter, others succumbed to cold, wet and wine weasles. I had no idea what colours they were when I planted half a dozen in this big terracotta pot in the spring. The pot was given us by our elderly neighbour who moved into an old folks home a few months ago and won’t be back. We used to plant and maintain a trough of flowers outside his front door and he would sit in his porch and enjoy them. I’m sure he’d be pleased with how the begonias turned out.

Four.
Our floral display at the front of the house is a mix of things moved out of the glasshouse for the summer and pots of bedding plants. And the odd Dahlia that I didn’t get round to planting. And the Impatiens auricoma x bicaudata that were cluttering the conservatory and actually do very well outdoors. And the Coprosma that needs planting out and kept blowing over round the back.

Five.
Dahlia of the week. We visited the National Dahlia Collection field last weekend, must be one of their worst years ever, and still it’s fabulous. (and free). I bought this as a rooted cutting from them last year but it struggled somewhat; probably more my fault than theirs. It’s a collarette variety called ‘Danum Torch’.

Six.
Colour disharmony. I don’t care, you hear me! Right of the path is the oranges and yellows bed, except it used to be the pink bed and there are one or two still left and the whole clump of Helenium ‘Sahin’s Early Flowerer’ died mysteriously in the winter so gap plugging was called for and someone gave me a handful of roots of the anemone and it needed to go in somewhere quick. Excuses, excuses. The dahlia is one of my seedlings, that’s the most flowers it’s had all summer. Solidago ‘Fireworks’ is looming over everything; I’m still not entirely convinced it’s a great plant.
Left of the path hasn’t benefitted from a unifying theme. Zingiber mioga ‘Crûg’s Zing’ is intent on pushing everything else out. Its comeuppance is not far off. It sets off the purple aster, (I assume “aster” is still acceptable as a common name, even if it had too few syllables for the botanists) There’s a camellia at the back, it’ll get huge; a Schefflera top left, it’ll get huge; a magnolia far left, it is huge.

What, please can I have some more sir. I haven’t mentioned Haemanthus albiflos, or Molinia caerulea ‘Heidebraut’. Fuchsia ‘Papoose’ will be over by next week.

Humph, six it is then. Weekends wouldn’t be the same without a few more sixes popping up as links from The Propagator’s post every time I come in for coffee or lunch or whatever. Garden voyeurism of the highest order.