I meant this to be a monthly snapshot, but there has been slippage, my last allotment post being at the end of July. That was just after we’d had the first rain for ages but before anything was showing any benefit from it.

My runner beans had cropped well through the hot spell, sustained by copious watering. The problem was that in the hot weather we were eating mostly salads and had no use for runners. We’re not keen on frozen runner beans and have limited freezer space so we ate some, gave some away and put a lot onto the compost heap. I know “food waste” is as toxic an expression these days as “Donald Trump”, but I don’t see this as food waste. If it had been cold we’d have eaten lots of beans and I’d have been dumping lettuce instead. If it had been cold I’d likely have had a lot fewer beans to start with.

If a crop exceeds expectations and you get more than you need, you have food waste. If it falls short of expectations you’re off to the shops to make up the shortfall. If I have lots of cabbages I pull off all the nibbled leaves and just eat the heart; if I have less I do a bit of trimming and eat stuff you wouldn’t even buy in the shops. Rant over.

I didn’t keep on top of picking the beans and when the weather cooled the plants had stopped flowering and were laden with tough pods. I left them to ripen, the dried beans will go in soups and stews over the winter. 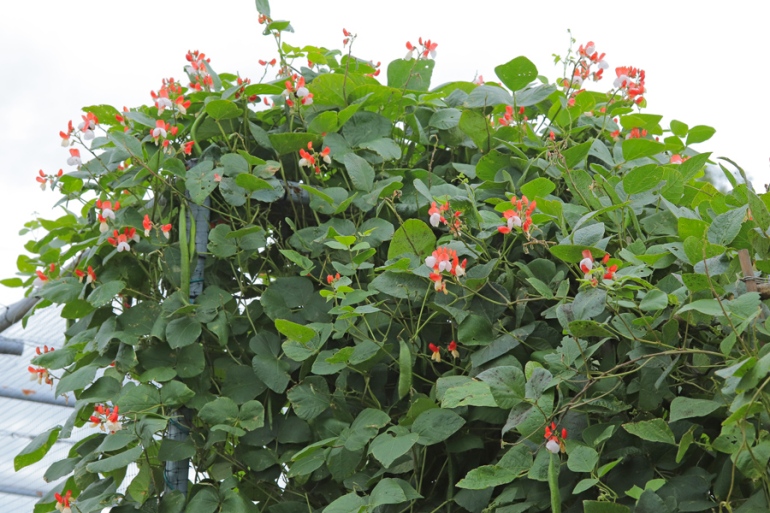 At the far end of the row are six plants of a bean given me by another plot holder. They are French, I was told, as if that explained everything. Connoisseur, gourmet; these are the French words that informed my expectations. They set not a single bean in the June and July heat, in spite of having plenty of flower and getting exactly the same amount of water as the rest. Since the weather has cooled, they have been producing modest numbers of short beans, enough for the occasional meal. They’re nothing special.

I read somewhere that at high temperatures runner bean pollen fails to germinate on the stigma. The unfertilised flowers don’t develop pods. ‘Firestorm’, the variety making up the rest of the row, is self fertile. I’d have taken that to mean that it could be fertilised by its own pollen but maybe it means that the beans develop without successful pollination taking place. 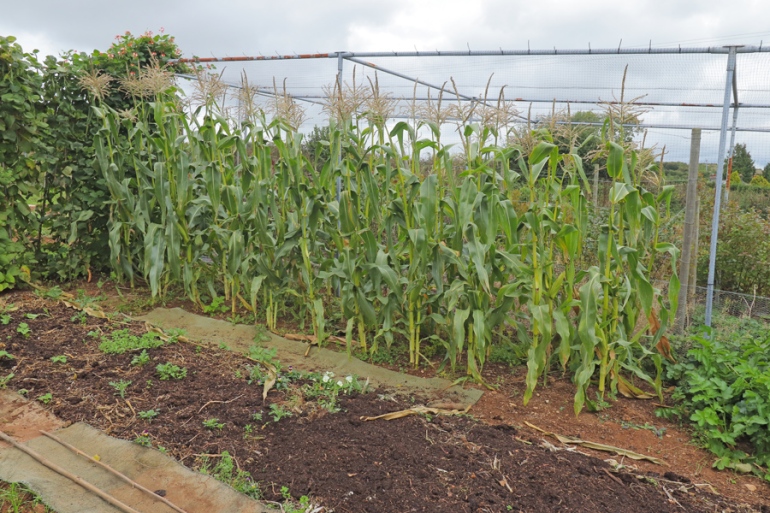 I grew two varieties of Sweet Corn this year, sowing ‘Earliking’ on 11 April and ‘Goldcrest’ on 6 May. ‘Goldcrest’ somewhat caught up with ‘Earliking’ and was ready only two weeks later; I could have done with a bigger gap. ‘Earliking’ had smaller cobs but bigger kernels, was much shorter and had fewer cobs per stem. That’s ‘Goldcrest’ in the picture, ‘Earliking’ was pulled out of the bed in front, shredded and spread back, then covered with a layer of compost. The ‘Goldcrest’ cob below is over 7″, without the stem.

Brassicas have done what was asked of them. Cabbage ‘Delight Ball’ took us through summer though I will sow some earlier next year. Following on was Red Cabbage ‘Kalibos’, which I did two sowings of. The second sowing of that, plus a row of ‘Huzaro’, will hopefully get us through the winter. I also have Flower Sprouts, Kale ‘Midnight Sun’ and Purple Sprouting Broccoli for winter into spring. The kale and PSB, in the lower picture, were planted where the peas had been, somewhat messing up my crop rotation.

I used Italian Ryegrass as a green manure in the first year on my plot, digging it in before planting in the spring. It made prodigious growth, stood very well over winter, protecting the soil from winter rain and holding onto nutrients that would have leached away. The soil tilth when it was turned in was excellent and the nutrients were quickly released to the growing crop. Then I decided to go no-dig. Field beans and grazing rye were a complete failure as green manure in my second year so I gave up and simply mulched the ground in autumn with compost for the next couple of seasons.

Now I’m experimenting with green manure again. I’m hoping the Italian ryegrass will make lots of growth this autumn, perhaps even to the point that I take a cut off it with shears. Then I plan to chop it down and cover it with Mypex early enough to give me a good kill by early May. I’m not quite sure how long that will need so I plan to cover it early February, allowing eight weeks before I want the ground. I can check and leave it longer if I have to. The grassy strip in the picture had onions in the nearer half, potatoes in the further half. The strips of carpet keep the paths weed free, I just need a bit more.

At the top left in this picture are courgettes which, like the runners, cropped like mad when it was hot and we didn’t want them, then gave up. They’re now starting to crop again, so hopefully we shall have courgettes for a few more weeks. The onions still left are spring onions that have bulbed. Some we have eaten but they are much inferior to the “proper” onions, of which we have loads. I grew ‘Rumba’ from sets and ‘Armstrong’ from seed, both very successfully this year. ‘Rumba’ were lifted a month ago, ‘Armstrong’ a few days ago. 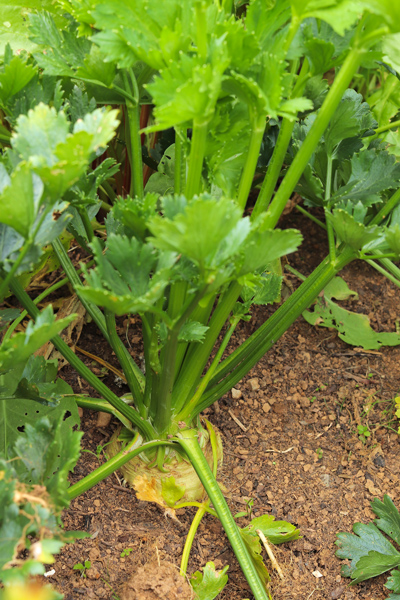 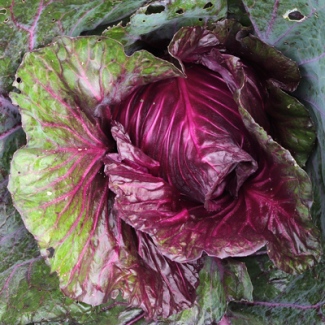 The only other thing worth a mention is Celeriac, which I love and Sue hates. I should have given it more space but it’s done well enough. I’ve had one, very nice. Oh hang on, did I mention the Dahlias on the other plot? 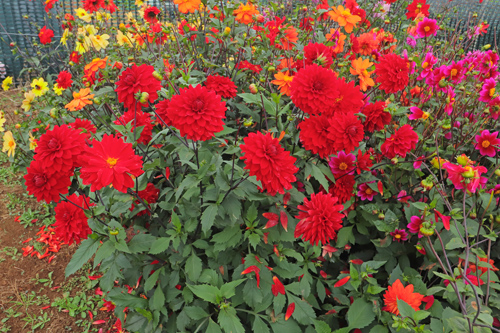 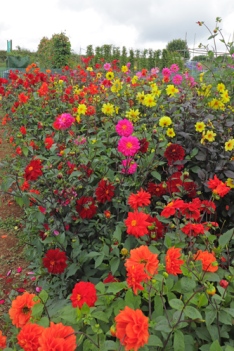 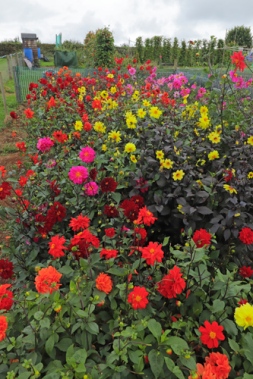 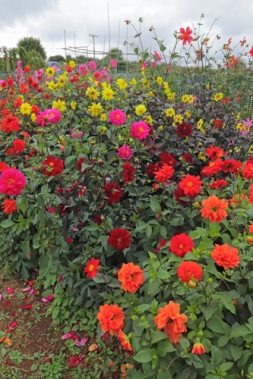 I might have said this before but they’re seedlings. The outstanding red is called number 15.