The honest truth is that I don’t have much to say about Dahlias. I grow quite a lot, I love them. When I say quite a lot, I have around two dozen in the garden, almost all named varieties that I’ve bought, plus 56 seedlings that I’ve raised myself which are growing on my allotment.

The seedlings were raised from seed I collected from two of the named varieties, ‘Orange Cushion’ and ‘Veritable’. They are astonishingly varied, with singles, semi-doubles and doubles in red, yellow, pink and mauve. Most have green leaves, some are dark, one almost black. As a block they are amazing, but when you start to look closely you see their limitations and realise how good the best named forms really are.

There are a few with blooms of good colour, shape and size. There is one that has been a block of colour for many weeks, though its flowers are not outstanding. A few have a hopelessly untidy habit of growth.

It is perfectly easy to get full sized flowering plants by midsummer from seeds sown in March. I shall keep the ones I have, leave them in the ground and protect them as best I can. Next spring I shall sow more and perhaps plant out three more rows. If nothing else it should make a spectacular display. 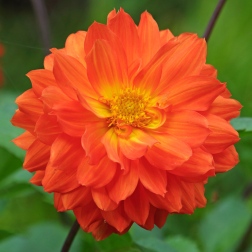 Most of my Dahlias are left in the ground over winter. My practice has been to grow small plants on in pots until they are a reasonable size then to plant out into ground that has been liberally improved with garden compost. I usually plant in a slight hollow so that it’s easier to pile leaves or some such over the crowns in winter.

When they get a couple of feet tall I drive four canes in around them and run two or three loops of twine around to support them. The canes are soon hidden by foliage. In dry weather I water them thoroughly perhaps weekly, and if a boost to growth is needed I liquid feed them. I dead head them, simply snapping off the spent flowers. I don’t disbud them to get bigger blooms.

Slugs are predictably the biggest problem, mainly when new growth is starting in spring, and various methods are used to control them.

This year was probably my most difficult yet. Many of the plants were very slow to get going in the spring. I don’t think this was because the cold had damaged them but rather that the ground was colder than usual. Perhaps planting deeper played against me for that reason. Because they were slow, they struggled to outpace the depredations of the slugs. Most did eventually get growing and they sailed through the summer drought with comparatively few problems.