My polytunnel is tucked as far into the top corner of the garden as feasible but there is still a fair sized space behind it. Until late May the space was home to a large Magnolia, two large Camellias and a mix of hazel and cotoneaster, all making the tunnel rather shady. The Magnolia was leaning at 45 degrees and resting on the tunnel, it had to go.

Armed with a small triangular bow saw, I wasn’t able to cut it very low, so a stump about 3 feet tall was left. One Camellia I cut to the ground, the other to around 4 feet. I then potted up some Camellias in 20 litre tubs and stood them in the space.

The Magnolia decided not to take such maltreatment lying down and started to shoot, which I noted but did nothing about. Yesterday I moved the Camellias out of the way and had a proper look. I don’t know why I let it develop two stems from the base like that. 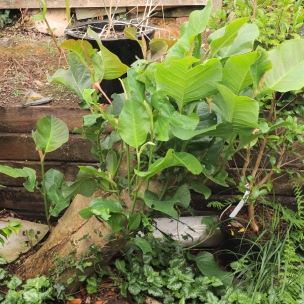 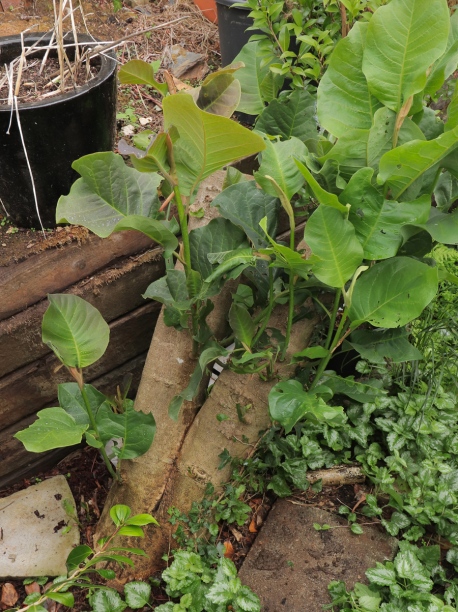 I think I can get the magnolia back as an upright tree on a single stem. It will have a bend at the bottom which won’t matter, but it is growing strongly suggesting the root system is in good shape, even though it had allowed the tree to fall over. For now I have left a few shoots. Next spring I will choose a good one, hopefully it will be the lowest, and remove the rest. Because the shoots are epicormic, that is they’ve arisen just below the bark, they are very susceptible to being knocked off. The Camellias will shelter them, so long as they don’t get blown over onto them.

Both Camellias had started shooting too but the one I’d left was just too near the tunnel. They’ve been cut to the ground and the stumps treated.

The Magnolia is ‘Vulcan’, a variety that isn’t highly regarded in this country because its flowers are not the glowing red-purple they are in New Zealand, its country of origin. It is nevertheless a prolific flowerer and still worth having as a small tree.