I wouldn’t go so far as to say I’m having to pretend it’s winter down here in rainy Cornwall, but while there has been frost on the car a couple of times, we’ve had nothing to do any damage. There are odds and ends of flowers everywhere, but mostly bedraggled and looking sorry for themselves. So rather than focus on summer’s leftovers, I’ve tried to move onto winter’s main dishes.

One.
Schefflera taiwaniana is a classy plant that I obtained originally as a bunch of fallen fruits while being shown round what had been Edward Needham’s garden near Truro some years ago. I held them up to the present owner and got a wordless nod. I know of one other seedling from the same batch, quite a bit different in appearance, so maybe they’d picked up pollen from one of the several other Scheffleras present.

Mine is now between 8 and 9 feet tall and I had been saving it for inclusion here when flowers were in short supply to be very surprised when I looked at it closely to see it is flowering. That’s flowering!! Woo! Woo! I look forward to finding out if it can produce viable seed without a mate. The other option is to try and take cuttings from the small shoots low down on the stem; haven’t a clue whether that would work.

Two.
Phyllostachys aureosulcata ‘Spectabilis’. Not a name that exactly trips off the tongue but a wonderful plant for all that. Our garden is just a little too windy for this tall bamboo and we lose a few stems every year. It’s around 16ft tall and has spread over twenty years to cover maybe 10ft x 4ft of ground. A few wayward shoots have been removed. I remove side shoots from the bottom 3ft to show off the stems and harvest some of the oldest canes each year to use them as bean sticks. Excellent stem colour, evergreen and won’t get taller than it now is; what more do you want from a plant?

Three.
Starlings. I was going to put in common oak; we have one growing at one corner of the garden, another overhanging the opposite corner. I went out to take the picture and realised that I actually like the constant chatter of the starlings that are usually in them rather more than the trees themselves. Starlings it is then. I was even going to put an audio file on here but WordPress wouldn’t play without pay.
We get them in dozens. Place I used to work, south of London, had a roost at back of the head gardeners house of around 2 million. Commuted into London in the morning, back home in the evening. Just like the people. Loud. Very loud.

Four.
The light. Very low in the sky as the sun is now, its light reaches places it never normally does. A leaf here, a flower there, picked out fleetingly by a warm toned spotlight. I’m almost unable to pass a window without looking out on something else that requires me to grab the camera and go capture it. 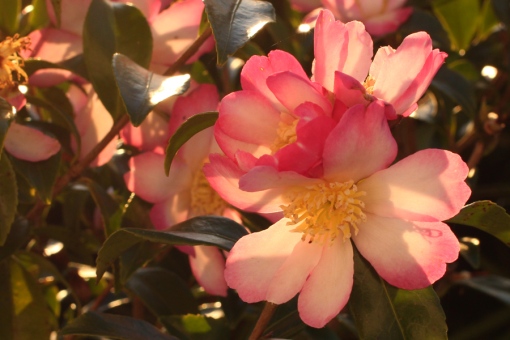 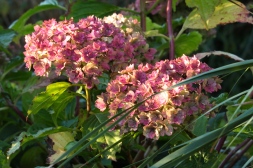 Five.
Pinus koraiensis ‘Silver Ray’. When I got this, it was on the strength of a picture in a conifer book of an unusually narrow columnar pine with lovely bluish foliage. I now realise that the plant in the picture had been pruned to get the shape. You don’t immediately think that a pine would be trimmed to shape so you assume that’s how it grows. The realisation came too late for me to try for the same effect, you can keep them narrow if you start early but you can’t make a wide one narrow. I also hadn’t foreseen how much next door’s Crataegus would spread, so it has become one sided and leaning as well as too wide. One day it’ll have to go but that day hasn’t arrived yet.

Six.
Camellia x hiemalis ‘Bonanza’. I’m testing my limits again, flanking the featured Camellia with a couple of others, because I can and because they’re all flowering in my tunnel. ‘Bonanza’ first flowered in 1959 and was a chance seedling of C. sasanqua ‘Crimson Tide’ in America. I think it’s a fairly recent arrival on our shores. Compared to many autumn flowering Camellias it has a short but spectacular flowering season, this year for the month of November, tailing off into December. The blooms are relatively large, about 6-7cm across, scented and as vivid a colour as you could wish for. It seems to want to be spreading rather than upright, but could be trained.

And so begins the weekend. Get my post sorted, then make the first of several visits to the links on The Propagator’s blog over the next couple of days to catch up with all the other contributors to the meme. I don’t know about anybody else, but the deeper into winter we go, the more interested I am to see what other posters have come up with. It’s making me look harder and think more about my own patch too. All good.