I am very much enjoying this weekly glimpse into other people’s gardens. This week I have included one item that is not a flower or plant, trying to put myself in the position of visiting a garden open for the NGS and wanting to look at everything. Don’t worry, it’s not my shed; if I opened my garden I’d padlock that! Even so, compared to pictures of flowers, it feels relatively exposing.

One.
Hydrangea ‘Izu-no-hana’. The bloom on the left is growing in the ground which is the acid side of neutral. Most of our hydrangeas flower blue. The bloom on the right is on a plant in a pot. I haven’t checked but I would expect the compost to be much more acidic than the soil. Hydrangeas flower blue in acid soil because at low pH aluminium is available to the plant. In a soil-less potting compost there is no aluminium to be available, no matter how acid. So it flowers pink. Easy from softwood cuttings.

Two.
I don’t know what the hell it thinks it’s doing but I have leaves and a flower on Cyclamen hederifolium. Hopefully this will seed about with no help from me.

Three.
Gladiolus papillio ‘Ruby’. For me the ordinary Gladiolus papillio spreads everywhere but almost never flowers. This beauty has stayed as a clump and flowers every year at the same time as Agapanthus. I have collected seed and grown them, but not yet to flowering size, so I don’t know if it comes true.

Four.
Dahlia. This is a very lovely dahlia. Its flowers are the clearest red, with good stems for picking. I like it very much. BUT it is still not the one I ordered, which was a collarette called Chimborazo, of a different level of flamboyance.

Five.
Fuchsia ‘Annie Geurts’. Of all the fuchsias we grow I think this is the weirdest. It doesn’t have a lot of vigour and I have struggled to keep it going and to propagate it. I’d hate to lose it, as far as I know there are no nurseries in this country offering it.

Six.
A departure from pictures of flowers, my mist system. I set this up three years ago because I found myself out of a job and in possession of several hundred unrooted camellia cuttings; like you do. For a while I entertained the idea of producing camellias for sale and while I haven’t entirely given up on the idea, I have reined in my ambitions greatly. 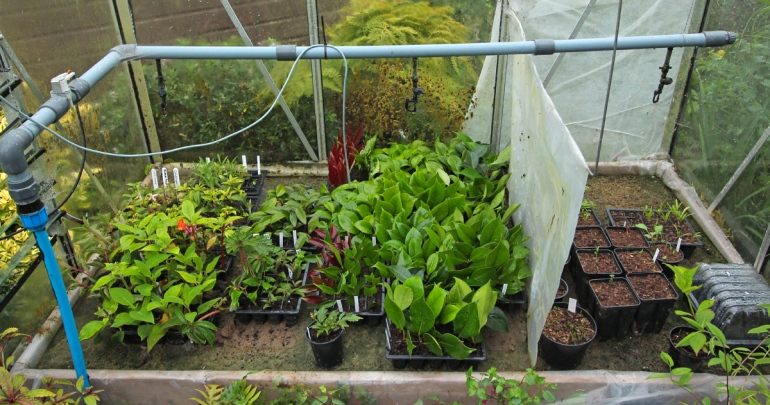 It has three mist nozzles running off the mains: fortunately our water is pretty soft. It is controlled by an Access mist and wean unit with wet leaf which cost £175. The pipework, nozzles, solenoid valve, sand bed and undersoil heating cable were on top of that. It’s a lot, but I spend much more on camera gear and use it less. I have temporarily blocked one nozzle and screened the mist, so I have a dry area with heating for seeds. Under the mist at present are Fuchsias, Salvias, Impatiens, Osteospermum, Dahlia, Enkianthus, Rhododendron ‘Lady Alice Fitzwilliam’ and 30 sorts of Camellias.

Obviously for much of that, a mist unit is overkill, but I have it so I use it. Soft subjects like Fuchsias and Salvias root in a couple of weeks, the camellias can take six months. I strike almost everything in half-tray sized twenty cell modular thingies. It makes it easier to remove a well rooted plant without disturbing the rest.

You can think of that last item as an homage to ThePropagator, whose meme this is. I’m off to check out his six for this Saturday and links to a number of other contributions.