I have posted under the Six on Saturday meme for three years now, seeking out half a dozen items of note, usually on a Friday, to include in my contribution. The one constant throughout is that later on Saturday I will find something more interesting than anything I included. A flower will have opened, a rare seed germinated, a long lost plant reappeared or I will notice viviparous seed germination on a Skimmia.

Vivipary is when seeds germinate while still attached to the parent plant. It’s not uncommon and is often a consequence of wet weather hampering the shedding of seeds and providing instead the conditions for them to germinate. I saw it last year on Teasel, the flower head, instead of dropping its seeds or providing food for finches, had turned green as most of the seeds germinated in the seed head.

The Skimmia is S. japonica ‘Bowles Dwarf Female’. It produced a heavy crop of fruit last autumn and went in a six on 12 October. The fruit persisted right through the winter and was still mostly there when the bush made a half hearted attempt at starting into growth this spring. Some of it is still there now. The fruits seemingly held no appeal for the blackbirds we’ve had several of all winter, nor have they just fallen off. Instead, the seeds inside have started to germinate, splitting the fruits, which are still firmly attached to the plant.

I’m sure you know by now where this is leading and you’d be right. I picked off the berries and set about teasing out the little plantlets. 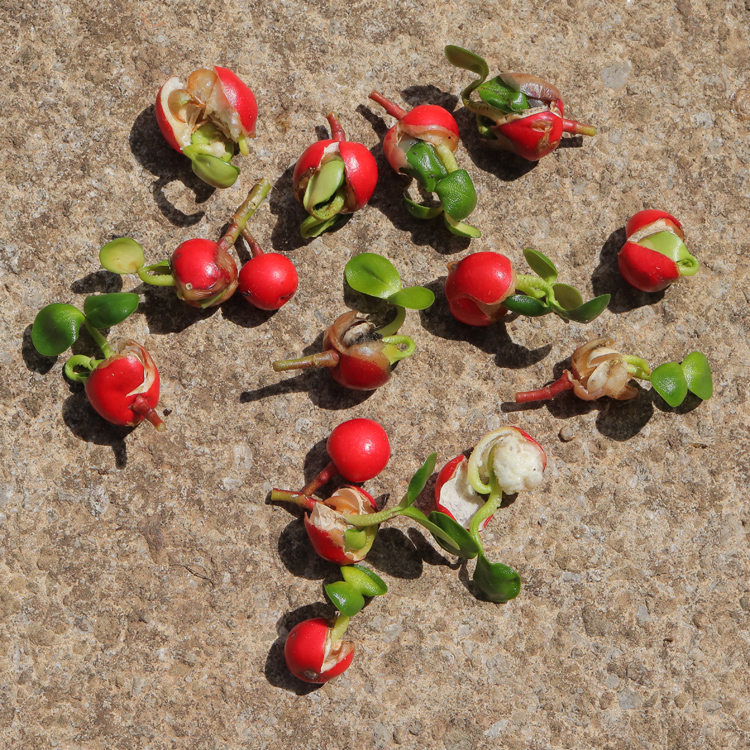 The seedlings were firmly rooted into the fibrous lining of the fruit so most got planted with a bit of the fruit attached. I put 20 into one of my usual cell trays. Just for good measure, I pushed a few into the surface of a pot of compost without detaching them from the fruit at all. 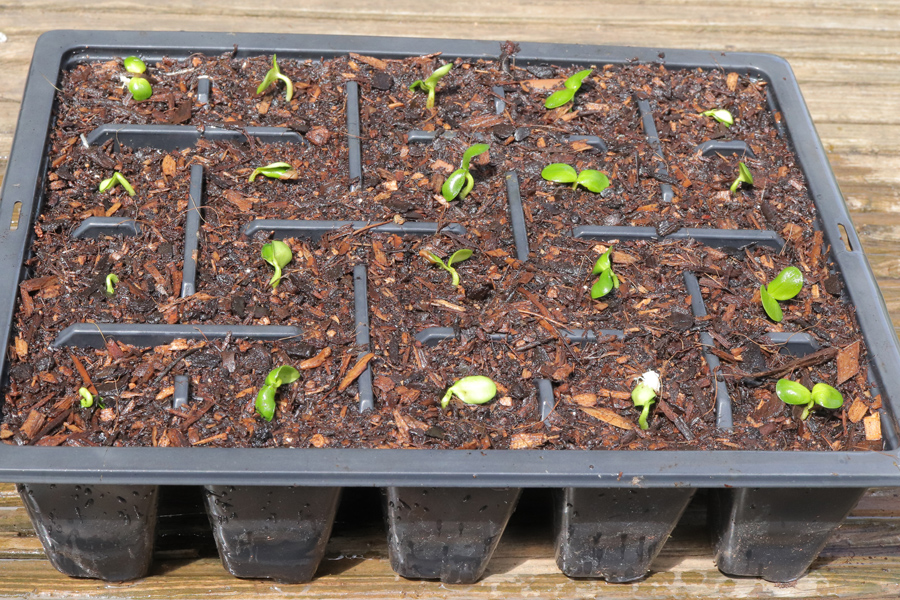 Skimmias are mostly hermaphrodite, with separate male and female plants, and few are self fertile, so it is reasonable to assume that this plant has been pollinated by a nearby male. In our garden there is only one, a bush of the widely grown ‘Rubella’, which, as ornamental as it may be, doesn’t produce much viable pollen. There may be a more virile male in a neighbour’s garden but basically I don’t know for certain who’s the daddy.

Seed is given as a method of propagation in my Toogood prop book, with no mention of the progeny not coming true. It will be a while before I know what I’ve got. Sexing them before they flower is impossible. Will the males all look like ‘Rubella’ and the females like ‘Bowles Dwarf Female’ or will there be dwarf males and ‘Rubella’ sized females as well? It even crossed my mind that pollination and fertilisation were separate processes and that if it were pollination that triggered fruit formation rather than pollination, the seeds could be apomictic and the progeny clones of their parent.

I wondered if it might be a natural process, giving the seedling a head start when it eventually fell to the ground, but I have never had self sown seedlings of it and the only two fruits I could find that had detached themselves had been munched by the mighty molluscs, at least the emerging seedlings had been.

It didn’t work out for the teasel either. In the autumn there was a carpet of seedlings, thousands of them. Now I can only find three.