Oh so gloomy out. It’s dry and not exceptionally cold, so usable weather for doing the things that need doing, but there’s not a lot of pleasure in it. I need to get out there, I have things needing doing.

One.
Two years ago at this time we were down under in Australia. Their fruit growing is very localised and we were at the southern edge of pineapple country. We ate quite a lot of pineapples and would have eaten more had not mangoes also been in season. Every morning I sat on this bench and had mango for breakfast. Did I have cereal with it? I can’t remember. We cut the top off one pineapple and planted it just beside the bench, a bit too close as it turns out. I’m impressed that it grew, and even more impressed at how beautiful it is. Four year old granddaughter Elsie is a cracker too.

Two.
Meanwhile, back in perishing Blighty, there is less happening. I have to have at least one camellia each week or I’ll never get through them and today’s turn goes to Camellia japonica ‘Bob’s Tinsie’. This has just started flowering, it’s smothered in buds so may be back later in some form. The stamens turn into petals in double flowers, or in this case, petaloids. In the middle the stigma is normal, so the female bits are presumably fully functioning while the male bits are not there any more.

Three.
It’s easy to overlook things in the front garden; I tend to pass through without looking very hard. Spotted this new flower spike coming up on the Yucca gloriosa ‘Variegata’ yesterday though, which, given the time of year, doesn’t seem likely to end well. Who knows? 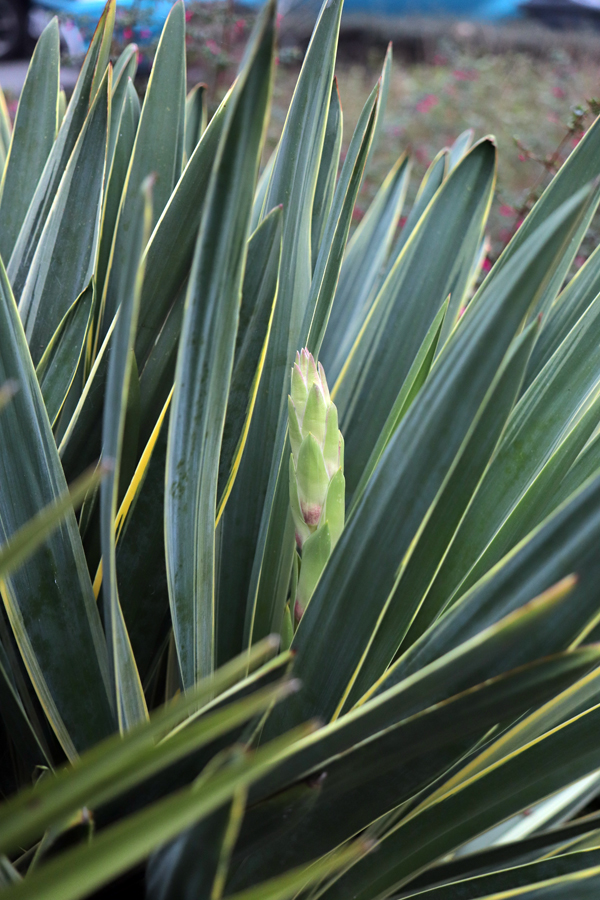 Four.
One of the advantages of working with a National Collection, while not being the holder, is that when things get too big in my garden, I can sometimes offload them. Camellia japonica ‘Odoratissima’ is nice enough in an unexceptional way, they have one already but needed a backup. Suited me, I’ve replaced it with C. ‘Sweet Jane’, which I’m hoping can be kept to the size I want more easily. Flower pictures will no doubt appear at some point. ‘Odoratissima’ is alleged to be slightly fragrant but I’ve never detected it.

Five.
The third, and last, of the Narcissus bulbocodium varieties I grew in pots this year. This is N. bulbocodium ‘White Petticoat’, a name which I have to admit, fooled me. It’s a very pale yellow. The flower is deformed, browsed on by something in the bud perhaps, but you get the idea.

Six.
A life horticultural. When opportunities present themselves I am often unable to resist, even when it’s something I have no space or use for. Thus Thursday saw me taking cuttings of a seedling Aucuba with heavily variegated leaves and very big fruits, my excuse being to get more than one plant of it into existence, the first step to making my fortune from it. Friday netted me seeds of Camellia ‘Gerude Preston’ (they’ll be good for rootstocks), cuttings of Rose ‘Betty Sherriff’, an absolute beast of a plant that will grow up large trees and drag them down, (it’s almost unobtainable and pretty awesome, perhaps I can give it away) and scions of an unknown apple that I gorged on the windfalls of in the autumn, (I will graft it onto my ‘Holstein Cox’, it’ll help pollination and it was a productive and healthy tree with excellent fruit, who cares what it’s called)

The last lot will take up some of the day. For now I need to get some bread on, get a coffee and check on the early posters on the SoS notice board. There’s a definite sense of having turned the corner and things getting better, which is nice even though we all know there will be stumbles along the way.