Well here we are twixt Christmas and a new year, again. I should reflect on the year just gone. . . . . . . . ., there, that’s done. Perhaps some resolutions for next year? Nah, don’t like the sound of that, let’s go with good intentions rather than resolutions.

One.
Move the tunnel. I was going to move my tunnel up to my allotment before the winter but the need for covered space meant it filled up when it should have been emptying so it didn’t happen. It really isn’t pretty and that won’t matter up there, whereas in the garden it’s in the background all the time causing visual offence. The linked good intention is to grow more veg over the winter months. We were all but self sufficient during the summer but winter and spring are more of a challenge. Hopefully the tunnel will add a few weeks to both ends of the growing season. I’m trying not to think about all the stuff I’ve got in it now and where it will all go next year. Sometimes you hoard things because you can and it’s easier than making a decision.

Two.
Talking of the allotment, I popped up there on Monday to dig some carrots and this beauty was in my fruit cage. It had evidently had breakfast (pile of feathers) but seemed unable to find its way out. I leave the door off this time of year so the birds can clear insects off the fruit bushes, not so they’re easy prey for sparrowhawks. It was sitting on a post when I left so I dashed home, grabbed the camera and went back to get some pictures. I’m still not wholly convinced it’s a sparrowhawk, a young one maybe. About 30cm head to tail.

Three.
Another good intention, this one’s at least two years old. Sue’s cactus house is getting very mossy. Cleaning the glass is easy enough, at least outside, but the moss eventually starts to lift the glass from the glazing bars and wicks water from the outside to the inside; it starts to drip. I need to take out the glass, clean both glass and bars, put it back again. I don’t like faffing about with glass.

Four
Moss and lichens are a mixed blessing; on the glasshouse nothing but a nuisance, but on a pot, or covering up some unattractive brickwork, what’s not to like.

Five.
Camellia update. Camellia sasanqua ‘Navajo’ first appeared in a six on 26 October and it still has quite a bit of bloom on it. C. ‘Paradise Belinda’ is right beside it and has just opened a couple of blooms. C. ‘Quintessence’ is in the glasshouse and flowering well, perfuming the air. Out in the back garden C. ‘Minato no Akebono’ has just started to open; it’s loaded with buds so barring hard frost should be very good this season. There’s a C. ‘Sasanqua Variegata’ flowering in the tunnel too. All scented. 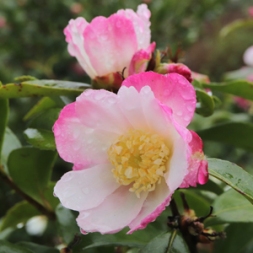 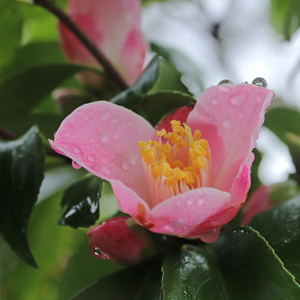 Six.
I’m determined to use more video clips on the blog, easy enough if I edit on the iPad, which I never do, more complicated on the PC. Like this Muehlenbeckia astonii, you get much more of a sense of it as a 3D object.

Another year draws to a close. The calendar year is about right for us northern hemisphere residents, in that it’s aligned with the natural cycle, the old year is gone and largely forgotten, the new one all just promise. It’s hard to imagine a new year starting in midsummer, but it does exactly that for many. The next few months can be frustrating because winter just won’t give in and nothing grows as quickly as you want, then summer goes in a flash…………………..
Perspective, that’s what this ability to see what the rest of the world is up to gives me. The links to it are where they always are, at el propagadora.