It hasn’t been a good week for gardening. Let’s just leave it at that and move on. I’m off to Rosemoor today for the RHS Early Camellia Show. Glad I’m not competing, it’s going to be very hard to find undamaged blooms.

Bit like that finding six things for this, for starters I didn’t really want to go out to look.

One.
I started indoors, well the conservatory, where the Bergenia ciliata I bought from Rosy Hardy at her talk a few weeks back is still unplanted. Flowering nicely though and I still haven’t decided where to put it.

Two.
I’ve been trying to get a colony of Cyclamen repandum going for a couple of years now, mostly from small self sown corms I’ve been given. They’re not going to be over-running the garden this year, or next, but there are a few buds showing. I’m hoping for them to carry on when Cyclamen coum is done.

Three.
Skimmia japonica ‘Bowles Dwarf Female’. This is an excellent form, very low and compact, but painfully slow growing. I might see if I can transfer some pollen from ‘Rubella’ onto the flowers on this, maybe get more berries. Bit of dry weather would help.

Four.
Magnolia ‘Ann’. There were 8 “Little Girls” raised by Kosar and de Vos of the American National Arboretum and one of my books describes this one as being an erect form. My plant evidently read a different book as it grew around 2m tall and now only grows sideways. It doesn’t seem to mind getting beaten back. 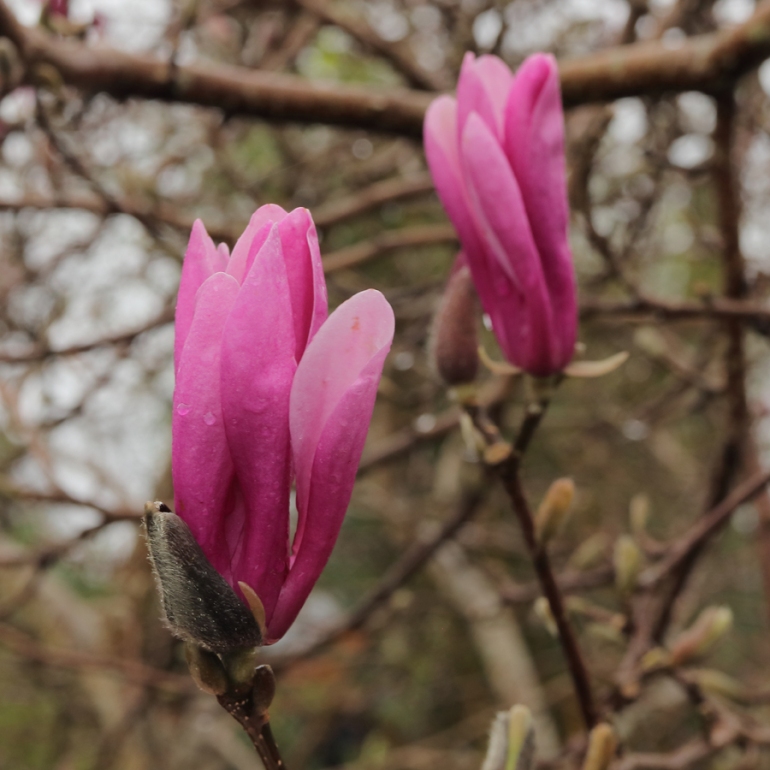 Five.
We will have new neighbours from Monday. They have small children and are planning to grass much of the front garden into which I’d planted a few good plants for the previous occupant when he was housebound. The new people told me to take anything I wanted to keep so I dug Camellia ‘Prudence’ and a couple of other things. It’ll be off to a new home when the wind drops.

Six.
I keep on buying the odd pot of bulbs in hopes they’ll be happy and that I will want to bulk buy loose bulbs later. Anemone x lipsiensis ‘Pallida’ has been in for a couple of years and the clump is getting bigger. Chionodoxa (Scilla now) luciliae ‘Alba’ is in its second season and is no smaller than when planted. Muscari latifolium has been in for several years. I don’t even know where it started and it’s popping up in several places very well apart. I don’t think I will need to plant more of that.

And a sneak preview of next week to finish on.

The weather forecast for next week is rather better. It needs to be, I have things I need to be doing. It’s a bit demoralising when there are more things flowering but the wind is knocking them for six and the rain is keeping you inside anyway.

I’m expecting a bit of grumbling and some stoicism from somewhat frustrated northern hemisphere gardeners this week. Mr Prop will be master of ceremonies as ever.