When I was writing this yesterday afternoon it was 8°C and raining, as it had been all day. It was also getting brighter, like it was going to brighten up just in time to go dark. Thanks a lot. I didn’t fancy going out in the rain with my camera and today I’m off gallivanting so all my six are from the conservatory or the porch.

One.
Camellia ‘Ariel’s Song’. Another slightly tender variety that I will have to risk outside at some point because it’s getting too big to stay inside. It’s lightly but pleasantly scented and has long narrow leaves with a strong reddish colouring when young.

Two.
Onions. I grew onions from both sets and seed last year. I read somewhere that seed raised onions kept better and that is proving true, although the ones from sets were lifted a month or six weeks earlier so have been hanging about that much longer. Several of the bulbs from sets have been rotten whereas so far none of the seed raised bulbs has. The sets were of ‘Rumba’, the seeds were ‘Armstrong’, first sowing 3rd February, main sowing 4th March and caught up with earlier lot.

Three.
Succulence or, if you prefer, succulents. Duddleya brittonii. Duddleya has a bit of a reputation for awkwardness but they seem to do well enough for us. They stay in all year round as rain washes off the white powdery covering from the leaves, leaving them looking rather ordinary and green.

Four.
Echeveria elegans borders on being hardy. I think it might survive a winter outdoors here if we didn’t get any sharp frosts and they had been grown hard in the summer with perfect drainage, full sun and poor soil. It’s the sort of thing that survives on St Michaels Mount, crowing in vertical rock crevices facing south. It’s a bit faster growing than some, so you can get a decent sized container well filled in a couple of seasons. This little trough is around 17 ins long.

Five.
There may well be a label buried under this mound. I have no idea what it is but it’s quite hard and spiny so I’m not going rummaging. It’s been in this pot for a good few years.

Six.
Echeveria agavoides. There seems to be a lack of consensus over a common name, with the first page of Google entries including molded wax, wax agarve (sic), molded wax agave and molded wax succulent. It’s not an agave, it’s an echeveria, quite different. There’s lots of varieties of this species, all good. Like Echeveria elegans, comes quite close to being hardy in Cornwall. 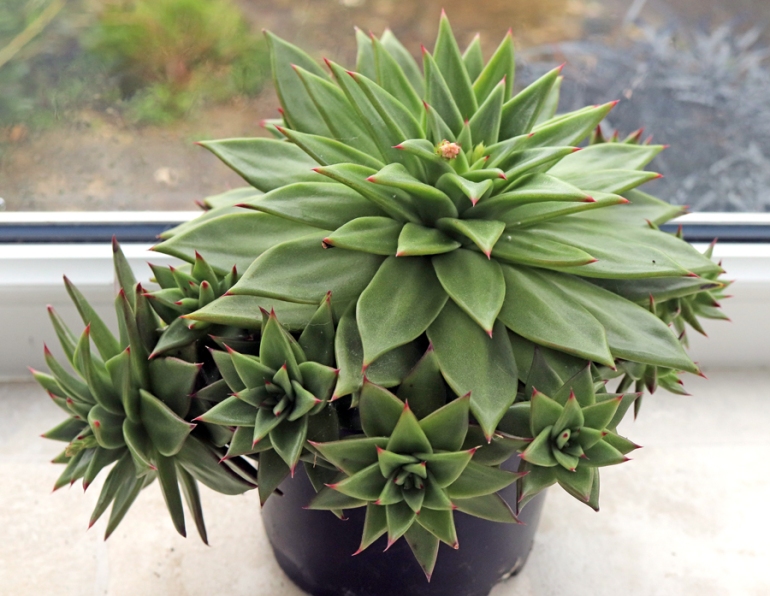 So the last four are growing in our front porch and go outdoors in front of the house in summer, except the Dudleya. Here they all are together. 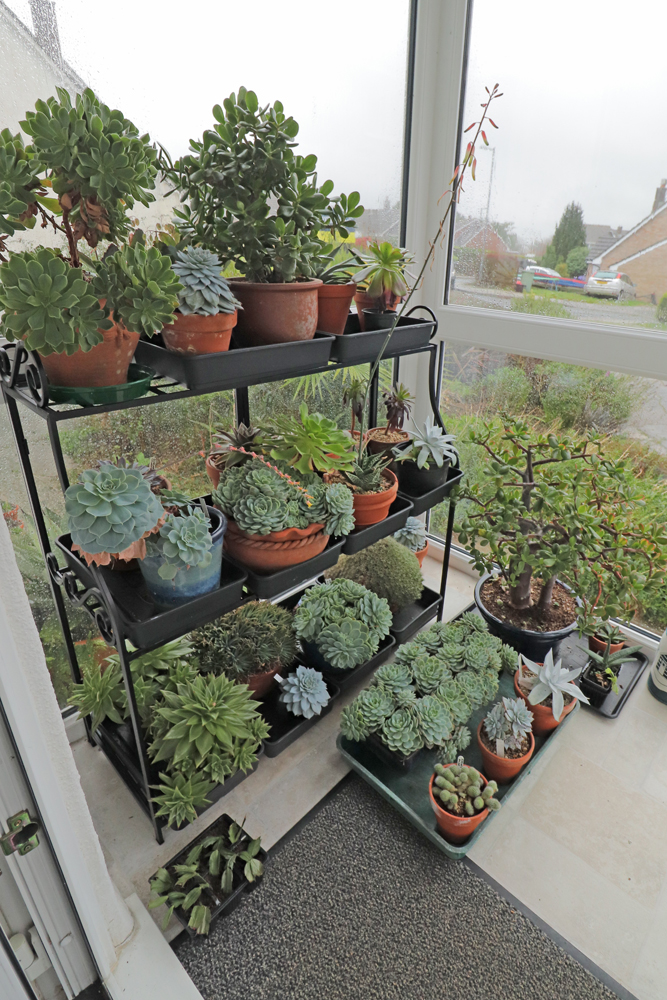 Gotta go. I’m being hassled for action. Other sixes accessible from links on the Prop’s comments section. Toodle pip.