In mid June I bought a plant of Anemone ‘White Swan’ and planted it in an open but partly shaded spot that I thought would suit it well. Then came the hot spell. I tried to keep it from wilting but it really seemed like the moment my back was turned down it would go. I think it’s dead. I’ve scraped around and can see no sign of life. It’s just possible it’ll reappear next spring but I won’t be holding my breath.

Maybe it was a bad choice. Perhaps the root system had already been damaged when I bought it by drying out in the plant centre. Should I have planted it in full shade? Perhaps I should have put it back in its pot and put it in shade to recover. Too late now.
Will I replace it? I wouldn’t be keen on spending the same amount on it again, I recall wincing at the time, especially given the sellers reputation for value. Everyone was raving about it though, and it was lovely for a couple of weeks before the weather went Saharan.

I like to think I’m fairly unsentimental about getting rid of plants that are not paying their way but this is a classic dilemma. Could it have worked out differently, planted elsewhere or looked after better? I could plant it again and it could fail again, for the same reasons or different ones. Or it could establish itself, perform heroically and be one of the best plants I ever bought. There’s only one way I’ll find out but there’s a white Hesperantha and an Indigofera both needing a planting space so undoubtedly the sensible thing is to put one of them in its place but where’s the fun in being sensible anyway?

I’m always looking to improve my garden, which for me means replacing a few things every year, hopefully with something better. I try not to get fixated on one characteristic when choosing plants, a long flowering season is not the be all and end all for example, but all else being equal, a better flower display, for longer, without needing support, healthy and robust but not invasive; these are merits worth seeking out. Ultimately though, you have to grow it to know it. 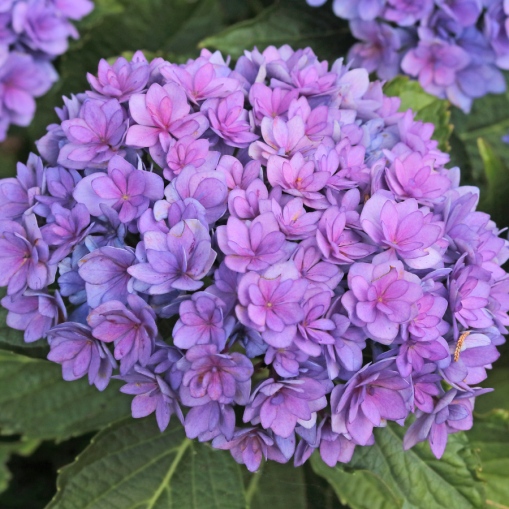 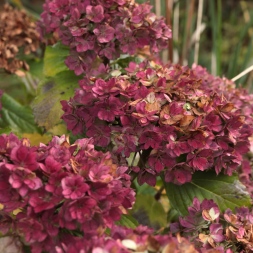 Coincidentally, I just came across the label for a hydrangea I bought about three years ago. Hydrangea breeders have been working on a range of characteristics to improve their garden performance. Flowering on new wood so they will flower continuously through summer, double flowers, black stems, coloured emerging foliage and assorted colour breaks are all in the mix.

The one I bought was from the You-Me series bred by Irie in Japan. It has double flowers and produces them continuously from early summer until autumn. It’s short and sturdy and has tolerated quite severe drought this summer without complaint. It is of course covered by Breeders Rights meaning I can’t propagate it for sale but I did take a couple of cuttings, as an insurance shall we say. A small plant in a one litre pot with a couple of clear pink blooms on it is a charming thing. The parent plant in the garden is covered still in its faded purplish blooms, still in fair condition. It’s doing all I could ever ask of it, and (whisper), I’m not sure that I really like it.

Talking of Hydrangeas, this history of the macrophylla varieties is interesting.