I don’t have lawn in my garden, so in theory I don’t have the regular chore of mowing. However, since nothing’s ever that simple, I do mow next door’s, except he’s now gone into a home and his mower has been given away so I had to do it with my strimmer. Then I went strimming around my allotment. The grass is growing again with a vengeance. I try to tell myself that it’s all good compost material but I can’t say I enjoy cutting grass. The grass is not the only thing to have been revived by the rain, most things are back on track with only a few showing signs of recent trauma.

One.
Crinum powellii, Powell’s swamp lily. I have had this for many years and this is the first year I can remember that it hasn’t been chewed to bits by slugs. It usually manages one or two flowering stems but by the time they arrive the foliage is wrecked. It’s supposed to be strongly scented but I’m not getting much from this one. The horseshoe stamens are my favourite thing about it.

Two.
Oxalis triangularis. I have no idea where this came from, I’m certain I didn’t plant it yet a couple of clumps appeared a year or two back. Oxalis makes me nervous, I have O. corniculata around and obliterate it when I see it. This one seems to be grown as a house plant as much as a garden plant but it came through last winter so it must be hardy enough here.

Three.
Cyclamen hederifolium is flowering away in various places and much happier for a bit of rain. It will grow where nothing else can, like right under my yew tree, so I’ve been planting a few each year in the hope they’ll get established and seed about. 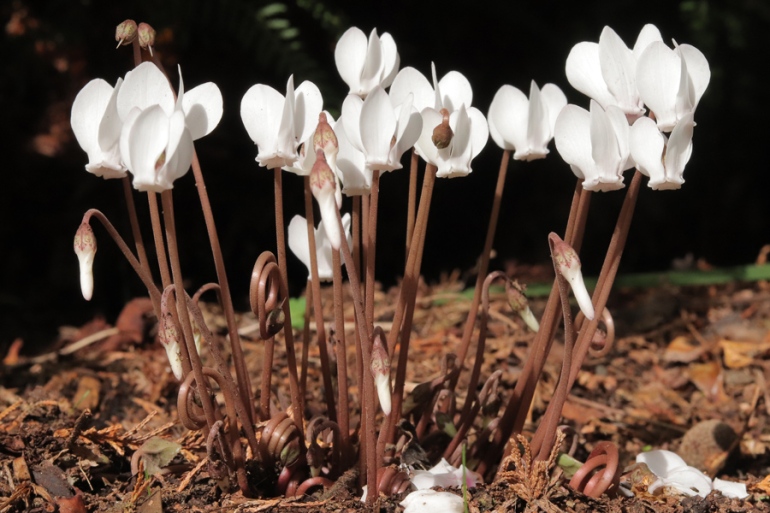 Four.
Ipomaea lobata. I’ve always known this as Mina lobata. I’ve grown this again this year to get some late colour by climbing it over early flowering shrubs. The problem seems to be that it doesn’t compete too well with the roots of established shrubs. There’s still time for it to really get going hopefully.

Five.
Dahlia ‘Weston Spanish Dancer’ and Rhododendron ‘Merganser’, lumped together because both are destined for the bin. The Dahlia has virus, so much for the “bargain” from the *** plant sale. I don’t know what the Rhododendron has, some disease or other. It has suffered dieback a little in recent years but this year it is much worse. I will try to get some cuttings to root, though there is not much good material. It’d be a shame to lose it, it’s the only Rhododendron I have left. 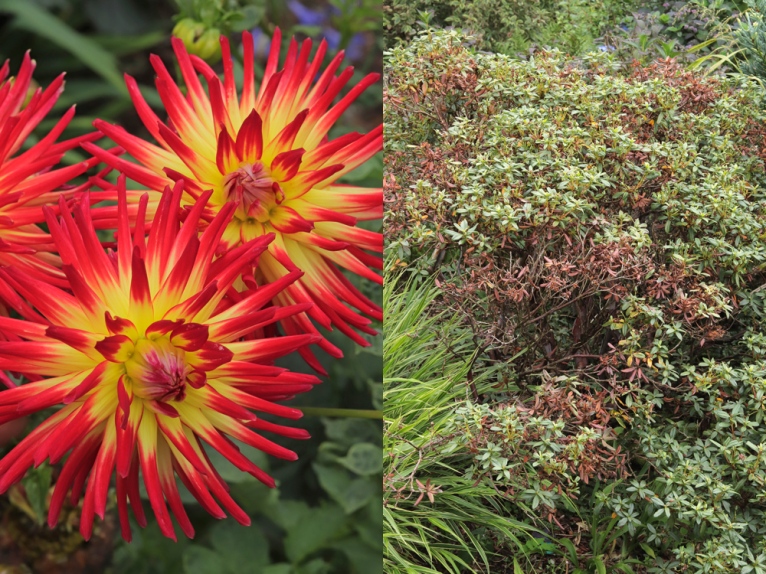 Six.
Begonia Summerwings®’Ebony & Orange’. There are so many new Begonia varieties around these days, new species too, and some good hardy ones mixed in. This has beautiful dark leaves which set off the elegant flared flowers. When it starts to flower it is fairly refined, but as the flower display increases it steps effortlessly across the line into unapologetic vulgarity. Much like Dahlias. I love it in both phases. “Elegant, stylish and vibrant” according to Kernock Park Plants; well, yes it is, but not all at the same time.

Right, I’m off to do some more strimming. The six on Saturday club is chaired by The Propagator, from whose blog there will be numerous links out into the rest of the world. We all spend the weekend (figuratively) tramping around each others gardens and a warm welcome awaits anyone who cares to join us.