Earlier in the week I blogged about the many and various plants that I grow in pots. I thought I’d zoom in on half a dozen for this week’s six. We had a little rain overnight but it’s sunny again now; much of what is in the ground looks jaded.

One.
Impatiens auricoma x bicaudata. We’ve been growing this for years in the greenhouse; it’s easy to propagate and grow and it flowers for months. Until this year it never occurred to me to try planting it in the garden. It’s doing really well but it’s not hardy so it won’t survive the winter, unless we get no frost at all, which could happen. I plan to leave it out and overwinter young plants.

Two.
Eucomis montana. We do have a couple of Eucomis planted out, though not this species. This is overwintered under the greenhouse bench, completely dry, then brought out late winter when it shows signs of growth. It gets put out the front in full sun and produces these very striking flower spikes. Striking in the visual sense, but also in the olfactory sense. Malodorous, foetid, mephitic, noisome, rank, putrid; take your pick, the fly went with ‘yummy’. 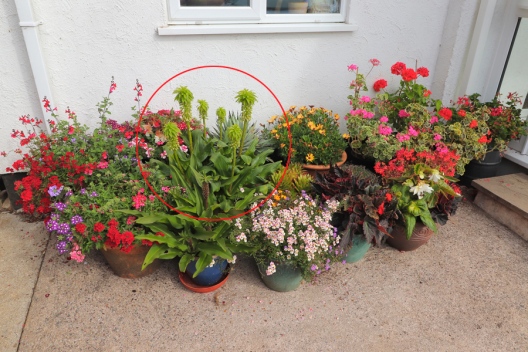 Three.
Eucomis vandermerwei ‘Octopus’. Another of these South African bulbous plants that we keep in a pot. It’s much smaller than E. montana, around 6ins tall, with leaves densely spotted purple to match the flowers. It gets treated the same, dry all winter, plenty of water when in growth, liquid feed when I remember it. You can propagate Eucomis from leaf cuttings, a bit like Sanseveria.

Four.
Hakonechloa macra ‘Nicolas’. Philip Oostenbrink, writing in the August edition of ‘The Garden’, advises buying this in autumn and selecting a plant with good colour. It should colour red but even though the plants are propagated vegetatively, they vary a lot in how well they colour. My assumption when I bought mine would have been that the more strongly coloured plants were the ones that were under stress and best avoided and that if they were all members of a clone they’d all perform the same under the same conditions. There’s not a trace of colour on mine. 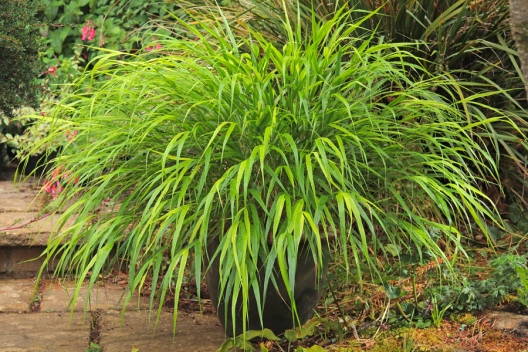 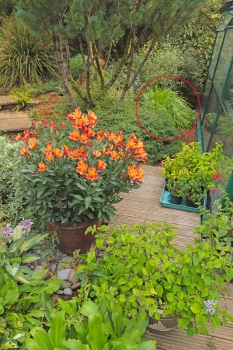 Five.
Echinopsis hybrid. When it’s hot these open early evening and last barely 24 hours. The whites and pale pinks have a light but lovely perfume; I’m not sure about this one.

Six.
Agave montana. This came from Nick Macer at Pan Global Plants quite a number of years ago. It originates from one of the coldest parts of Mexico and is reckoned to be one of the most suitable species for growing outdoors in the UK. Though ours is in a pot, it has stayed outside for several years now, the pot is 16 inches diameter. We are sparing with feeding and with watering from early autumn, so it is grown hard, improving its chances of surviving cold weather. There are several in the gardens on St Michaels Mount and at Tremenheere, in West Cornwall, all in rude health. 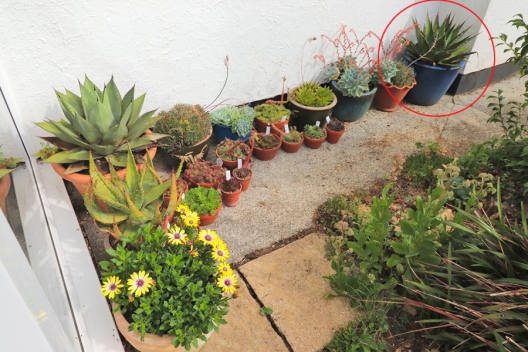 We went down to Penzance on Thursday, visited St Michael’s Mount, Tremenheere and the National Dahlia Collection at Varfell. All are still showing the after-effects of the winter, especially the Dahlias, which hardly had time to get going before they were hit by drought. Theirs are way behind mine, which made me feel better about mine but worse about theirs. We had lunch at Tremenheere, which was excellent. Cheered up the gardener by asking which species of Xanthorrhoea the large specimens there were (X. glauca). Nobody had asked her that before, they usually ask how many gardeners work there. (I don’t know, I didn’t ask, probably just her) Here’s a couple of pictures to whet your appetite. 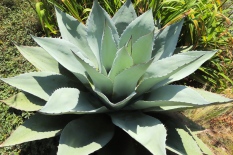 Meme host The Propagator is on holiday for a couple of weeks so presumably he will be checking in from some exotic location.