It’s a day under four weeks since my last allotment blog and it was the comparison in the pictures above that prompted me to do an update. The growth rate in the last few weeks has been something to behold. I am now harvesting quite a range of crops and a few more are very nearly there.

Strawberries have been good, almost untouched by slugs, meaning I’ve been able to let them ripen properly. Jam has been made. Lettuce, carrots, sorrel, spinach, spinach beet, rhubarb, beetroot, spring onions and courgettes have made it to the table. Early potatoes and peas will start this week. The only real disaster is that my garlic has rust.

For some strange reason the plots to either side of mine have had their peas ravaged by pigeons, while mine are completely untouched. I was a little earlier than they were but that seems to me the only difference. Not that I’m complaining.

I have mentioned before that I have real problems getting plants going from seed sown directly on the plot, almost everything being brought on in cell trays and planted out when an inch or two tall. Leeks, needing to be planted deeper, I did differently. I sowed them in a one litre pot then pricked them out about an inch apart in a ten litre pot when they were about 2 inches tall. They were then grown on until they were big enough to plant out. They are in the top right picture, beside the spinach beet at the far left.

The top half of the plot here still has brassicas covered with mesh to stop root fly. The cover will need to come off those on the right very soon. From left to right I have celeriac, first time I’ve grown it, seems to be doing OK. Above that is sorrel, a perennial I grew from seed last year. It is great in mixed leaf salads. Annual spinach serves the same purpose, along with lettuce. The very dark lettuce is Oakleaf Navara, a great success, the lighter one is Lollo Rosso. Green Salad Bowl was in the earlier picture. Between the lettuces is beetroot, a golden form called Boldor. This cooks far quicker than Boltardy and is sweet and tender. I’ll grow it again. 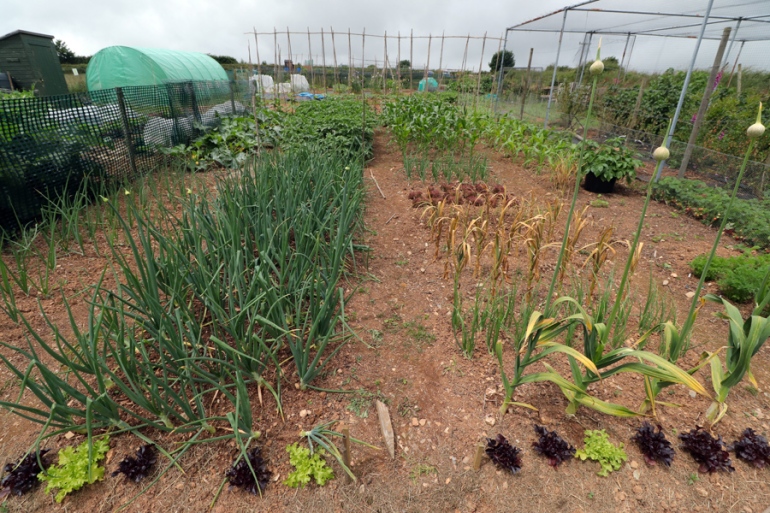 To the right of my windbreak are onions. Furthest on are Rumba, grown from sets started in cells in mid February and planted out in April. They’re planted quite close, we find medium sized onions more practical. I did two sowings of onion Armstrong, the later ones in early March, planted out in May, have caught up with the experimental earlier ones. They look fine but are way behind Rumba. Red onion Red Baron are at the same stage as Armstrong though they have suffered more slug damage. You can see my rusty garlic, Provence, with four good sized elephant garlics in the foreground. 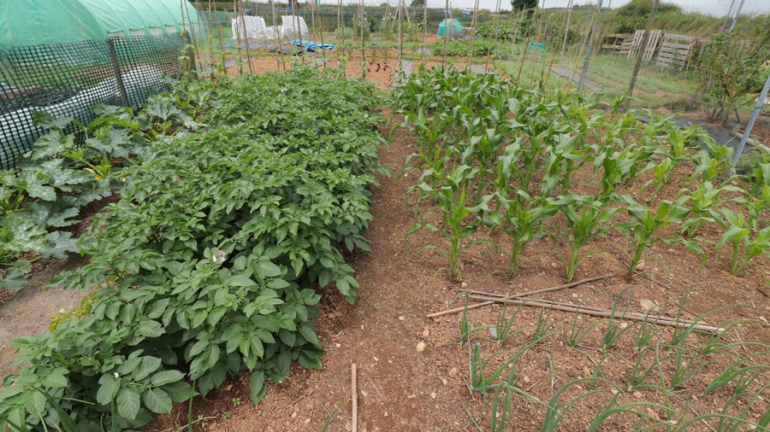 In the top half of that section are courgettes, potatoes, sweet corn and runner beans. I sowed all the courgettes in the packet, they all germinated and they were all planted out. I figured to get up to speed quickly then remove plants when the glut kicks in. I’ve only grown first early Charlotte spuds this year. In the four years I’ve had the plot I’ve had one decent crop of maincrops, every other year blight has flattened them. I’ll start harvesting any day now.

I’ve grown two varieties of sweet corn, sowing them about four weeks apart. I’m hoping for a longer picking season. They’re closer than it said on the packet but I figured on a wide open south facing slope I’d get away with it. I run the beans along the top of this section, same place every year, because they are not throwing shade over any part of the plot. I haven’t seen much difference between north and south side of the bean row. The beans are Firestorm, with six odd ones given me by another plot holder who got them in France. A week after he gave them to me, he apologised because his own sowing of them had failed completely so he’d realised they were duff seeds. I sowed 20 and 19 germinated. He wasn’t very happy when I told him, he’d gone out and bought plants. I suspect he’d used poor compost, or had them at too low a temperature, but you never really know.

Carrots I have continued to successionally sow in one litre deep pots, planting out as a clump as soon as the compost will hold together. Germination is faultless, fairly slow but always around 100%. Slugs are the enemy, I have had pots of seedlings razed overnight by a single slug in the glasshouse and one clump disappeared overnight just after planting out. The tricky bit is sowing them thick enough to have the roots hold the rootball together for planting but thin enough that they grow to a decent size. I aim for about twenty in the pot, but it’s usually more.

On my other plot (I’m greedy, I have two) I am growing Dahlias, Sweet Peas and Butternut Squash. (There are strawberries there too but I can hardly claim to be growing them). The ground is poor and very weedy. Several months of being covered with Mypex failed to kill nettles and buttercup. I sprayed part of it. The Sweet Peas and Squash are struggling but the Dahlias are doing rather well. I have three rows, all grown from seed collected from my own ‘Orange Cushion’ (rows 1 & 2) and ‘Veritable’. The middle row are from a 2016 sowing, the others from 11th March this year. I’m pretty chuffed to have flower buds forming even on some of those. I’m expecting most if not all to flower this year. I’ll keep you posted.