Has to be said that when I opened the cupboard of horticultural delights for this SoS it was looking pretty bare. It’s a good thing that hopes, dreams and disasters are admissible because that’s what’s on offer from me this week. I’m counting on everybody else’s contributions, linked from The Propagator, for an uplift.

One.
Cuttings; I think I can chalk this up as a partial success. When you take semi-ripe cuttings in autumn you know you have a long wait before success becomes evident. Failure can show up more quickly, but not always. New growth in spring is a fairly good indication that roots have been produced. I have a very fragrant Rhododendron, ‘Fragrantissimum’ or ‘Lady Alice Fitzwilliam’, and a very good form of Enkianthus campanulatus. Both filched from the park where I volunteer a day a week. Remuneration, I call it.

Two.
Primula ‘Dawn Ansell’. The double primroses I bought have largely recovered from their trip from France; this one is flowering nicely. I’m still waiting for planting out weather.

Three.
Dahlia seedlings. I collected seed from two of my dahlias last summer, ‘Orange Cushion’ and ‘Veritable’. Sown on the 11th, they’re well away. I sowed them too thickly and will need to prick them off very small before the roots get inextricably tangled. Some of the seedlings of ‘Orange Cushion’ I did a couple of years ago turned out better than passable so I was keen to try some more. 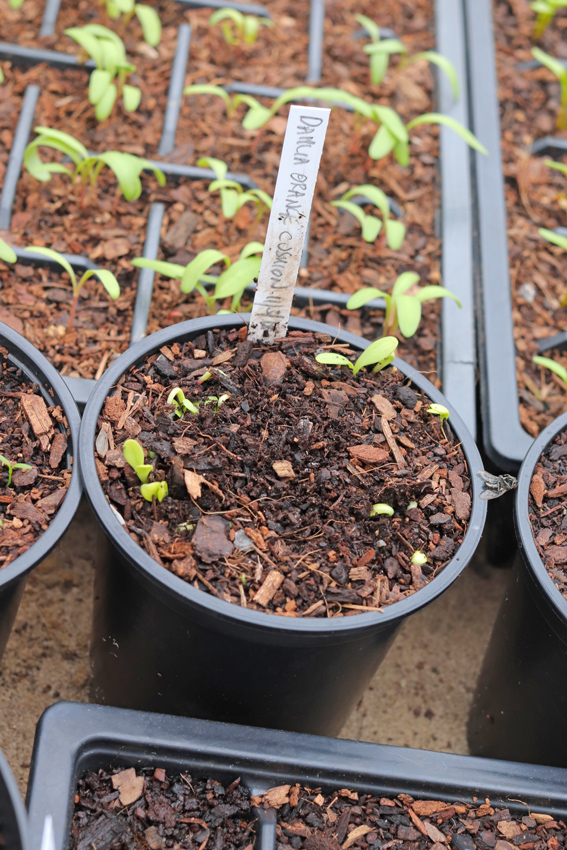 Four.
Camellia of the week is ‘Fiona Colville’. This was a sport of ‘Donation’ that arose at Penheale Manor in Cornwall in 1960. It is a considerably deeper colour than ‘Donation’ and completely stable. ‘Donation’ could well be the most widely grown camellia in existence; nobody has ever heard of ‘Fiona Colville’. Actually, that’s not quite true because the lady herself still lives at Penheale, which is a great garden, open occasionally, and I’m sure people know her, if not her eponymous camellia. This one is in a pot and is going to a garden nearby.

Five.
Damn. There’s a small awkward area between my shed and fence, stuffed with the sort of clutter that places like that attract. The fence post has rotted out. It was concreted in (not me, never) and is at the edge of a concrete slab. The last one took me half a day. And I fished the pump out of that big black water tank this morning. Toast.

Six.
Euryops pectinatus has had a long run without a hard winter but has been well and truly clobbered. I’ll hack it back, it’ll be fine. (Fingers crossed). The dead thing to its right is Salvia ‘Hot Lips’ which is also due a haircut. The brown Camellia is ‘Prudence’.