One of the advantages of being in Oz is that I can write a post at 6:30 Sunday morning and still be in time for Saturday in the UK.

A couple of times this week I drove our host to the station for his commute into Brisbane to work, passing by a very nice garden at the end of the road where the owner was out with loppers, curtailing the enthusiasm of her fast growing Corymbia ficifolia. At five to six in the morning!

The fact is, at this time of year here it’s the only sensible time to garden. Fresh, bright, temperature in low twenties. I’ve been doing a little bit of gardening with our host, it’s a bit different from home, even in high summer.

One.
Dypsis lutescens. Golden Cane Palm. I put this into my first Ozzie post a few weeks back, without knowing what it was. Palms are so exotic looking and so few are growable in the UK that to strike any kind of negative note about them seems ungrateful at best. They must be just about the easiest plants it is possible to grow here. There are at least two native species that grow locally and which are used in gardens, though most are foreigners. Dypsis is very common, partly because it is relatively small, partly because it is multistemmed and makes an effective screen. At least it can, if the occasional big stem is removed and the young ones that shoot from the base are left. Alternatively the suckers can be removed and the big shoots left, growing to around 10m in time. They shed leaves constantly and removing dead ones is one of the jobs I have contributed to. 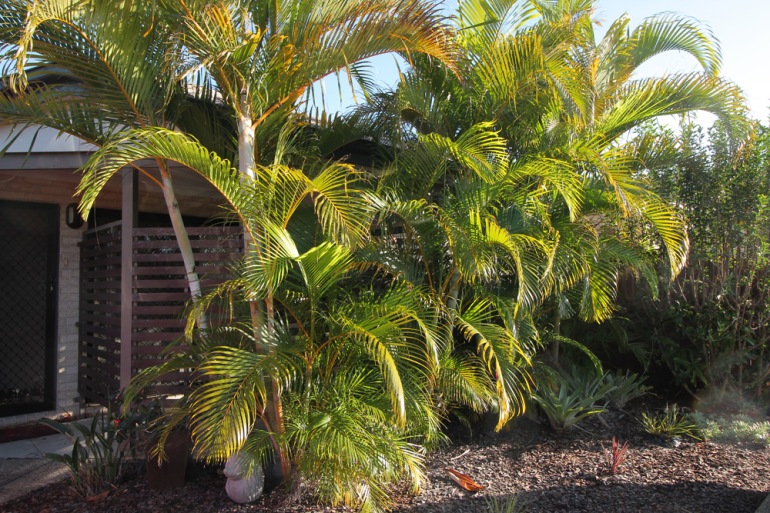 Two.
Bromeliads. Again, I have mentioned these before. Useful for groundcover in shade, but possibly harbouring mosquitoes, there was a sizeable patch around the Bismarkia in the back garden here. No more, they have been moved elsewhere or potted up. A big chunk went out the front. I grabbed hold of the clump and pulled, it came up easily, there being very little by way of roots. A square metre of it was plonked back down out front, pushed around a bit, watered once. A week on and it looks like it was always there. The front gets the same amount of sun and rain as the back, but the back is flat, giving the often spectacularly heavy rain time to penetrate; out front the ground slopes and most of it runs off. The bromeliads catch water in the rosettes so are less dependent on moist soil, hopefully they will thrive. 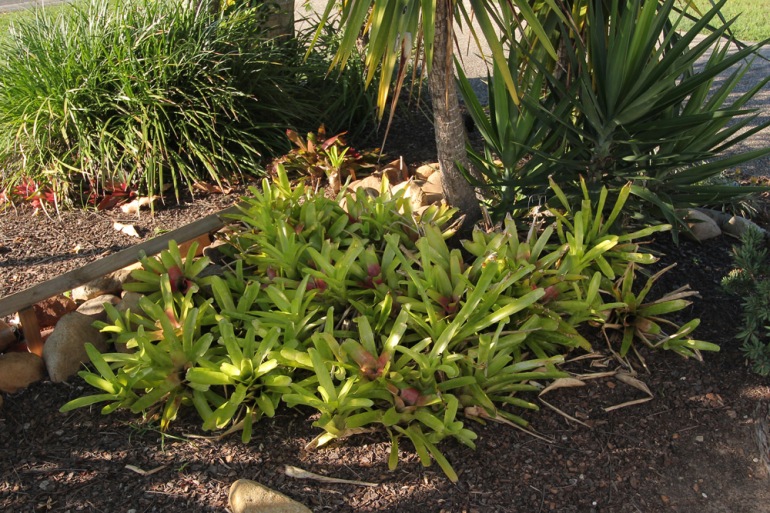 Three.
Cycas revoluta. This should be a fantastic garden plant here, the climate suits it just fine. Unfortunately it is targeted by a small butterfly which lays its eggs on the newly emerging leaves. The larvae are small but numerous and will frequently completely destroy a newly emerging rosette of leaves. The plant grows by putting up whole rosettes all at once, repeated once or twice in the year. It’s often all or nothing. We were giving this one the occasional spray of our mosquito repellent to try and deter the butterflies. It didn’t work, might even have been phytotoxic. Another tatty, ragged rosette of leaves will be the result, leaving you wondering whether to keep it or not. 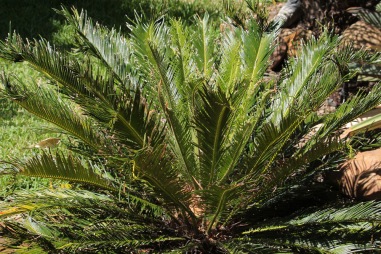 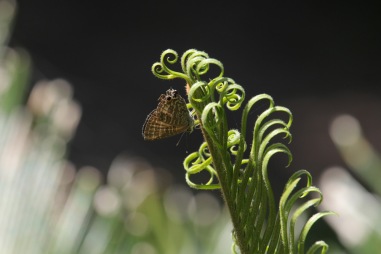 Four
Dracaena. This was in someone else’s six last week as a house plant. Here in the garden it is well over 2m and more than a little stemmy. It rains dead leaves. I think I’d cut it back hard, it clearly would shoot and regrow and I suppose produce a bushy plant with a different character to it. At the back is a plant of a brightly variegated form which isn’t doing so well; though I couldn’t say why that is. 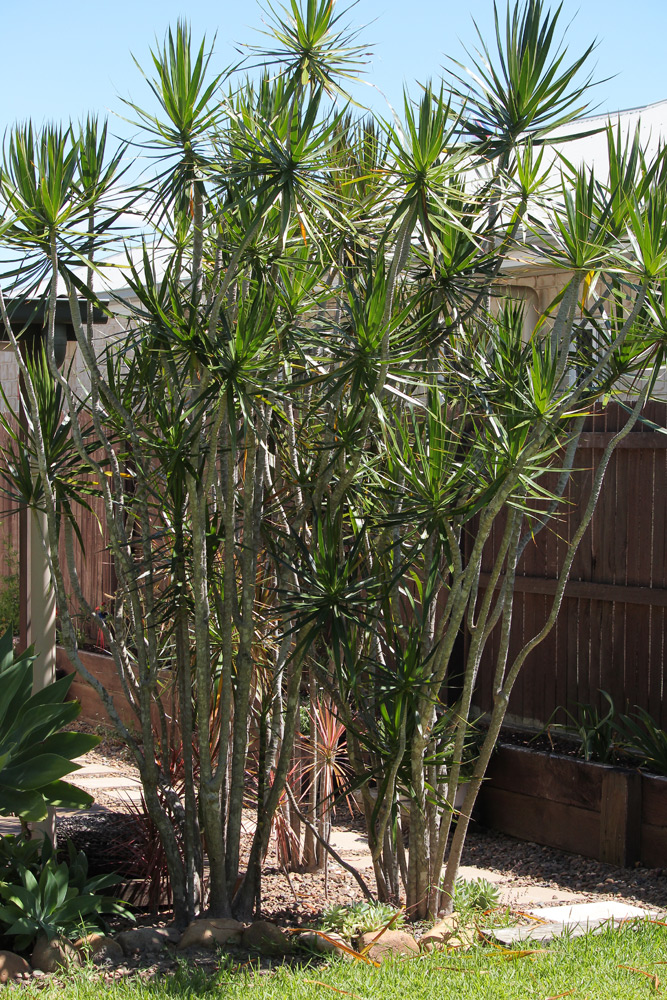 Five.
If there is one thing in the plant line that is tricky here, it’s smaller growing stuff. This Callistemon is presumably a compact selection and I have seen it mass planted down highway central reservations and on roundabouts. It’s lumpen. I don’t like it. 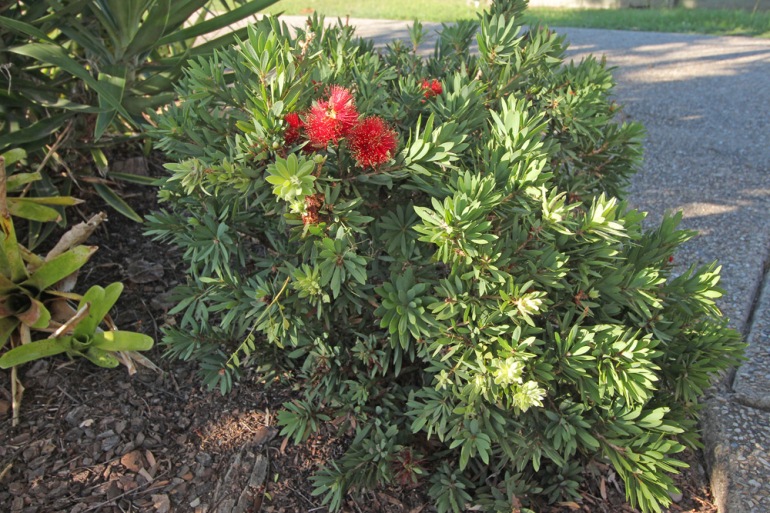 Six.
This is what Callistemon should look like. Bribie Island again. The price in mozzie bites for these pictures was very high. But big drifts of red and yellow Callistemons growing in a swamp. What? 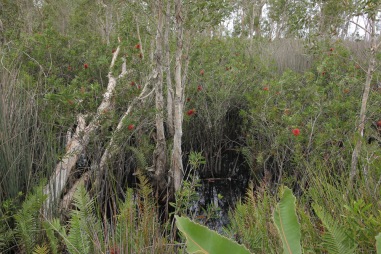 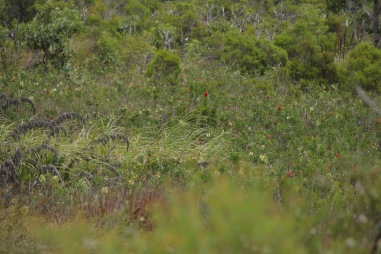 That’s it. Time to resume role of curmudgeonly grandfather to two year old. Gotta go.
Meme-meister ThePropagator will have links to other sixes.