Once more I can avoid having to think too hard about items to include as there are odd little planty things going on that I can report on. We had just a suggestion of ground frost yesterday but I haven’t seen any damage, even Fuchsia boliviana is unscathed. This morning’s sunrise was lovely, it’s cold but only just frosty atop the car. The gulls are cacophonous; you’d think we were by the sea, not eight miles inland.

All the dahlias in the garden are staying where they are. I’ve cut them down and piled half rotted leaves over them. The seedling ones I had on my allotment have been lifted and are in a box covered with old potting compost. There are still lots of things in pots that need moving in.

One.
Hedychium densiflorum ‘Assam Orange’ is something I featured when it was in flower, back in early September. It has produced fruits which are very slowly splitting open to reveal these vivid red berries within. In the past I have collected seed and grown new plants but I have no need of more. It comes more or less true from seed, which almost certainly means that much of what is sold as ‘Assam Orange’ is really just another seedling Hedychium densiflorum, quite possibly including mine. If anyone reading wants some seed, let me know.
Two.
Viburnum tinus. There are 34 forms of Viburnum tinus listed on the RHS website in what used to be the online version of Plantfinder. 15 have no suppliers listed, four more only one. The big ones are V. tinus, the species, and V. tinus ‘Eve Price’. ‘Gwenllian’, ‘French White’, ‘Purpureum’ and ‘Variegatum’ are widely available too. My plant is very different from all of these well known forms. For starters, the largest leaves are 11 cm long and 7cm wide, much bigger than the usual forms.

It was growing in my parents garden in Surrey when they moved in around 1956. The house had been built around 1900 and it is altogether possible it had been planted soon after. I’ve always assumed it was a form of the wild species that was available at the time. I just looked up Viburnum tinus in Bean* and it may be form hirtum, which the RHS says was last in Plantfinder in 2001.

Have I lost you yet? Suffice it to say that including it here was the spur to trying to find out more about it. It’s a handsome enough evergreen shrub though in truth it’s mostly nostalgia that motivates me to keep it. It’s a direct link back to the garden in which I became a gardener and a horticulturalist.

* Bean’s Trees and Shrubs Hardy in the British Isles is available online, updated to include New Trees. These books would cost you a small fortune to buy and they are available here for free.

Three.
Fuchsia splendens ‘Karl Hartweg’, or is it? It could be splendens cordifolia. Or maybe it’s ‘Lechlade Marchioness’. I don’t know how this came to be planted in the garden. It’s not regarded as a hardy variety. Perhaps it was bedded out for summer then forgotten. Who knows? It gets killed to the ground every year by the slightest frost and has to start from below ground in the spring. This year it is now about five feet tall and flowering freely, though it didn’t really get started until September. It has flopped more than somewhat and should have been supported, but it is mid November and it looks fantastic.

Four.
My polytunnel. In the top corner of my garden is a small polytunnel. I say small, by commercial standards it’s small; 10 x 20 feet. It has featured in these posts as background to a lot of pictures of Dahlias and Nerines. It’s full of camellias, mostly 9cm and 1litre.

When I finished employment 3 and a bit years ago I toyed with the idea of producing camellias for sale. I have since reconsidered but I still have a lot of stock. There’s another batch of cuttings on the mist bench now. There are days I’d give the whole lot away if I could find a taker. There are others when I have optimistic plans of what to do with them all. Some of them were flowering today so I took their pictures. The very least I can do with them is enjoy them and share them. 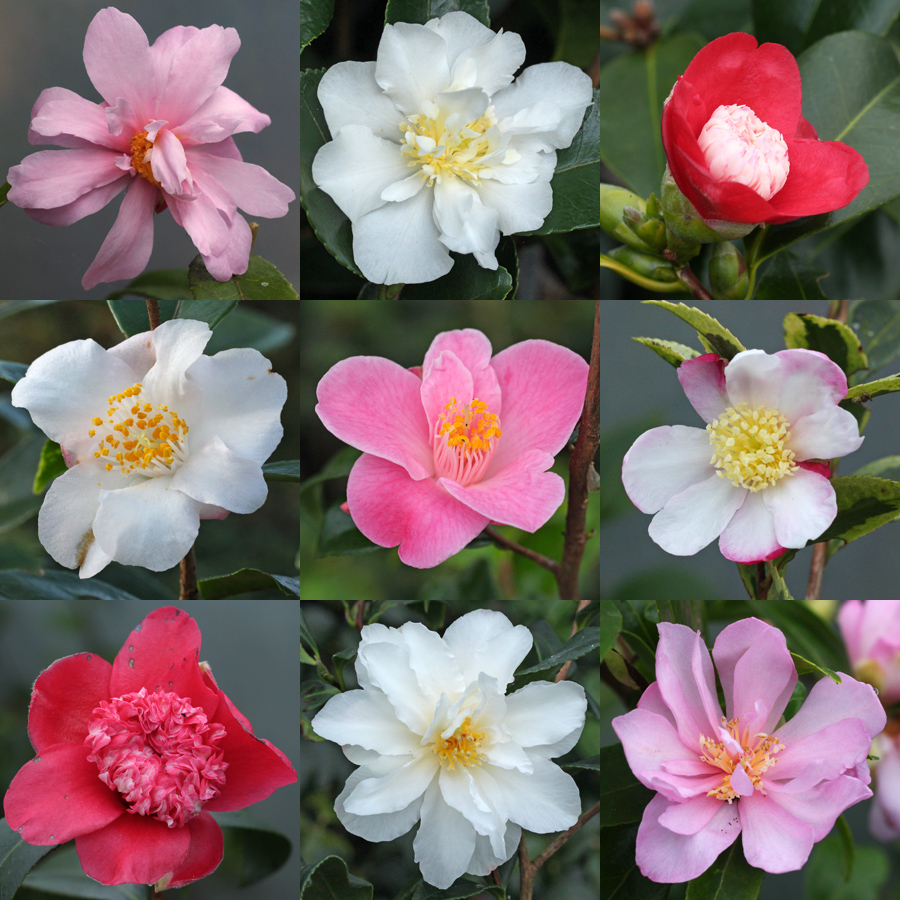 Five.
The tricky little encliandra group of Fuchsias, that’s the ones with the tiny flowers, threw up another conundrum last year when we were given a few cuttings of what appeared to be a white flowered seedling growing just below its pink flowered parent. It turns out that they open white then gradually turn pink, in the way of Hydrangea paniculata. I moved the parent plant last week. Six feet tall with slender arching branches carrying minute leaves and tiny pale pink flowers; beautifully graceful but in the wrong place. I hope it survives and thrives in its new quarters. Pushed for a name, I’d plump for F. obconica but I’m far from certain.
This flower is just 12mm from the top of the tube to the tip of the stigma.

Six.
Polystichum setiferum ‘Ray Smith’. I bought this at Binny Plants in Scotland years ago. It has long narrow fronds that come up at a steep angle and is almost evergreen. It also produces plantlets (gemmae, I’m informed) along the midrib (sorry, rachis) late in the year. In theory it should be a breeze to propagate but the plantlets are tiny going into the winter and by the end of the winter the fronds are dying off, taking the babies down with them. I have had some success with pegging whole fronds to the surface of compost in a tray but this year I have removed several and pushed them individually into a pot of compost which is now under the mist. My hope is that with a bit of bottom heat they’ll grow slowly over winter so I can pot them in spring. 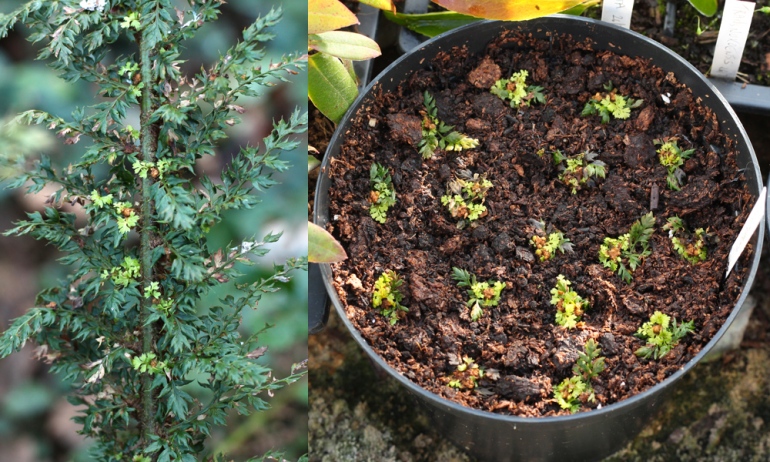 So another Saturday bites the dust. Five more till Christmas. Can I make 30 things happen in the garden between now and then? Might have to cheat.
Links to the rest of the six on Saturday participants will pop up through the day below Mr P’s own six at ThePropagator. Be sure to check them all out.