At this time of year you can be sure that all the better gardening magazines will have an article urging you not to cut down your grasses and herbaceous perennials but to leave them to enjoy their structure and shape when white with rime on those cold frosty but sunny winter mornings that we get so many of. In Cornwall you might be lucky enough to get one or two such mornings in a winter, but the grasses and herbaceous perennials will by then be lying in a soggy and bedraggled mess on the ground. I’ve just spent a couple of hours cutting down and shredding before this weekend’s gales really kick in. Right, enough whingeing, here are my six offerings for this week:

One.
One of the compensations for not being able to enjoy frosty mornings, and to be honest, you can keep them, is being able to grow things that would not survive up country. Like Fuchsia excorticata. There are a few Cornish gardens where this gets to something like the tree proportions it attains in its native New Zealand and when it does, its peeling bark is right up there with Stewartia sinensis and such like. Ours was planted on the bank between us and a neighbour and he has hacked it down in years past. This year he seems to have overlooked it and it is producing a few flowers. 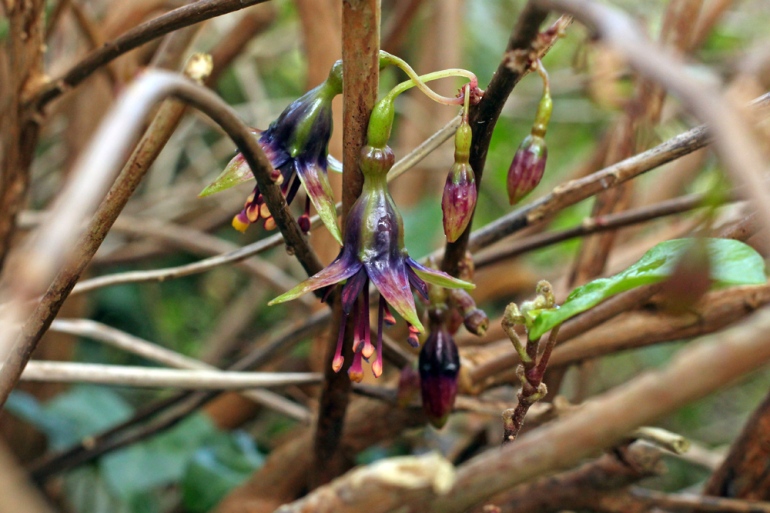 Two.
I make no apology for giving my two sasanqua camellias a second outing in a six. This is their second winter in their current quarters but last year they were still recovering from being hungry pot plants for a few years. They are now fully recovered and performing magnificently. They are very happy in poor stony soil and full sun at the front of the house, both flowering and growing really well. ‘Navajo’ and ‘Paradise Little Liane’ are their names. 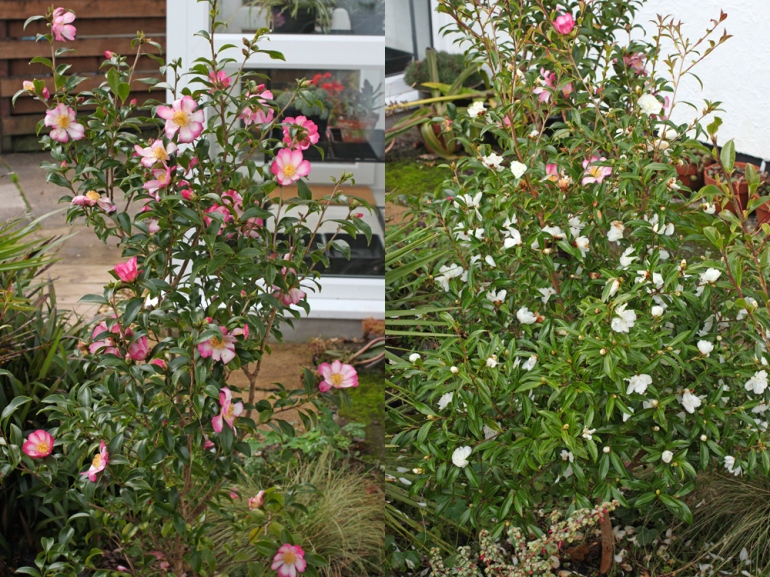 Three.
John’s piece last week reminded me that I did in fact have a garden ornament somewhere. This turtle sat looking out over our pond for years, then we filled in the pond. He stayed put, disappearing under lush vegetation and pretty much forgotten. I have now rescued him, given him a clean up and plonked him down to take his photo.  The location lacks an air of permanence. And he(/she?) needs a name. 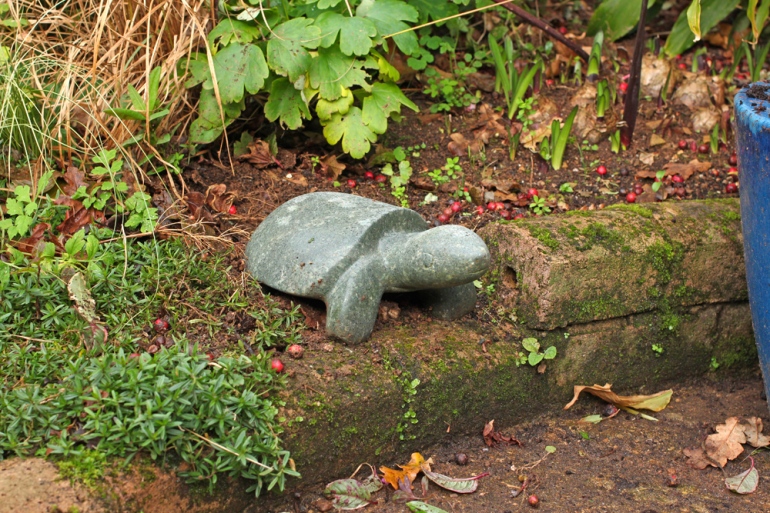 Four.
Coprosma. We haven’t had a name attached to this plant for years but Coprosma repens ‘Pink Splendour’ comes to mind. One of our local garden centres had five or six varieties of Coprosma in stock last week. A few years ago they were firmly border line hardy, even here, but they are very tolerant of low nutrient levels (aka neglect) which hardens them up effectively. This one has been in the garden for three or four years and is about 4 feet tall. Before that it was in a pot, outdoors, for several years. They look a bit like they might be made of plastic; glossy and oddly coloured. Bit of colour in the winter though.
The green leaved species grows on the western facing edges of the Scillies, completely impervious to what the sea throws at it. Like the Hottentot fig it shares the niche with, it’s an invasive alien, from New Zealand in this case.

Five.
Autumn colour, or Acer palmatum ‘Atropurpureum’. 99% of the leaves on this tree were ripped off by Ophelia and Brian while still dark purple. The remaining 1% have turned red and look very nice with the sun shining through. A little imagination and I can imagine myself at Westonbirt. 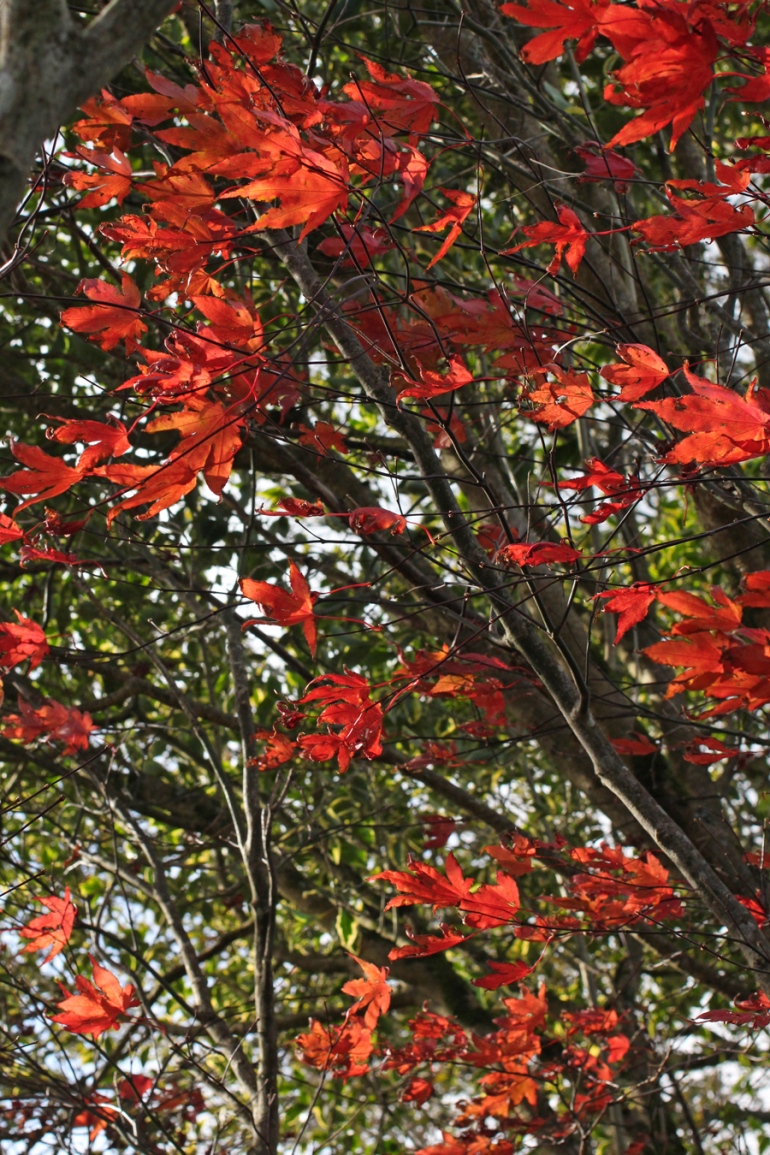 Six.
Miscanthus nepalensis. A couple of years ago I bought the grass Phaenosperma globosa at one of the Plant Heritage sales in Tavistock. It hasn’t been a success, a fact that gave me pause when I saw this on a recent visit. I went ahead and bought it anyway and have not been given cause to regret the decision so far. (My usual cause for regret in these situations is ear-ache)

There will no doubt be lots more sixes to enjoy, accessible from ThePropagator’s own weekly set. Hope you enjoyed mine, see you next week.