Six more horticultural Saturday happenings. It’s been a benign week weather-wise, the garden looks much as it did a week ago; not good but could be worse. Here’s what I found for this week.

One.
Hydrangea macrophylla You & Me Together =’Youmefive’. Confusingly there is a You & Me series and a Forever & Ever series, both of which  have a variety called Together. The You & Me series was raised by the Japanese breeder who won Chelsea Plant of the year 2014 with ‘Miss Saori’, Ryoji Irie. Dozens of new hydrangeas have come onto the market in the last decade or so, with breeders aiming to extend the flowering season, get flower on current season’s growth and in some cases to get interesting foliage colour. This double flowered mophead has been flowering since June and to my eye, the tiny petals make it a bit more refined than your standard hydrangea.

Two.
Camellia sasanqua ‘Navajo’. This could well be my favourite sasanqua. It originated in Japan but was renamed ‘Navajo’ by Nuccio’s Nurseries as the original name had been lost. This was in 1956, I doubt they would name it that now. The sasanquas need a sufficiently long season to make growth then initiate and develop flower buds before their autumn flowering season. This plant is growing in full sun at the front of the house.

Three.
Quercus macrocarpa. One of my fellow volunteers at Mount Edgcumbe was just back from a holiday in America and had brought back an acorn of bur (or burr) oak. It is apparently very rare in this country, though there are a couple in London over 25m and one in Devon (nearest to here) of 9m. I said that if I could grow it, they could have it for the park. The acorn is enormous, if it landed on your head from 25m it would seriously hurt.

Four.
Nerine bowdenii ‘Stephanie’. I admired this in a tweet from @Littleashgarden and was promptly offered some bulbs when it was lifted and divided, an offer I couldn’t refuse. I’m going to have to be more vigilant about slugs, which have shredded the petals, but it is lovely and a little later than my standard pink. Thanks Helen! 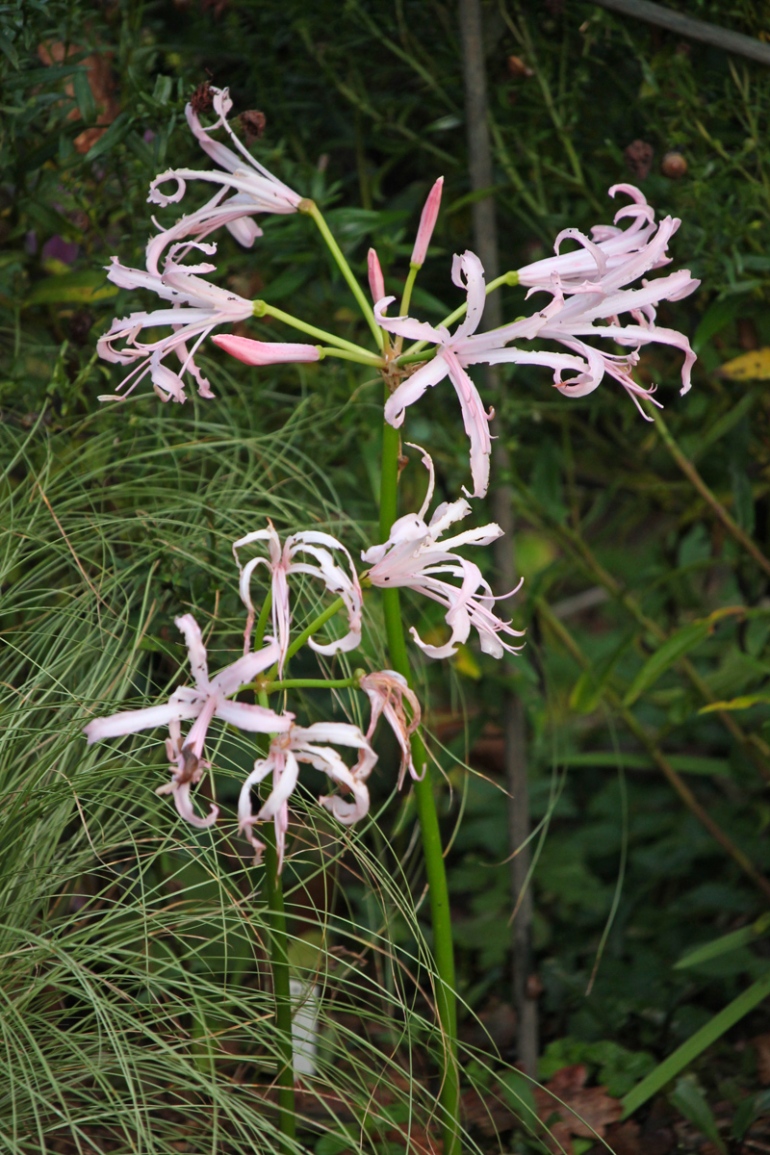 Five.
Fuchsia microphylla. The Encliandra section of Fuchsias is the one where they have very small flowers, some half the size of this one. F. microphylla must be one of the hardiest fuchsia species, in a garden I visited yesterday the owner said theirs had been in flower continuously for three years. We usually cut ours back hard in spring, which delays but improves the flower display. Last winter they came through without dropping a leaf or stopping flowering so we didn’t cut them. Probably a mistake. They are also very popular with bees which can get their nectar without wrecking the flowers like they do on most fuchsia varieties.

Six.
Salvia ‘Royal Bumble’. Salvias have a well earned reputation for flower power and for taking it deep into autumn. We have ‘Hot Lips’ doing its thing; this is currently on a par with it in our garden. It’s also more compact and has the best red flowers of any salvia I have grown.

I’m always keen to see what other people have going on in their gardens so I’ll be heading over to meme host ThePropagator to pick up on links to lots of other contributors.