These are butternut squash seedlings on my window ledge. It’s raining outside, which is a very good thing; steady, hour after hour. What happened to April showers?

April has seen masses of stuff coming into leaf and flowering like mad. It has also seen weeks of dry weather and the threat of frost on half a dozen or more nights. Much time has been expended on watering and moving tender plants in and out of greenhouses. I have runner beans germinating on the spare bedroom floor. Cucumber ‘Carmen’ are on the window ledge too, not far short of flowering. 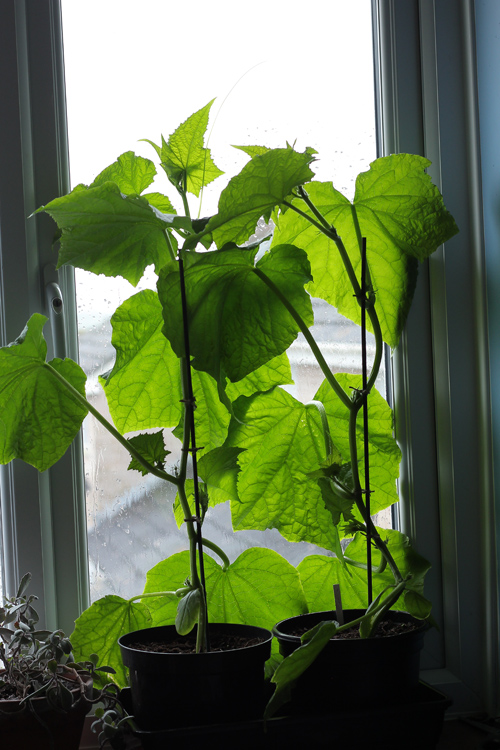 I suppose I should have seen the forecast and taken pictures yesterday, but I like the way that rain seems to intensify the colours, not that Camellia ‘Bob Hope’ needs it. The Hakonechloas are growing away well and the Acer has so far escaped the damage from cold wind it often suffers.

The other Camellia that is always very late is ‘Nightrider’. It’s just beginning its flowering and will soon produce new growth of a similar colour to the blooms. It’s about six feet tall now and will need curtailing before much longer.

Years ago I raised a couple of seedlings of what I believe was Rhododendron atlanticum, a deciduous azalea with superb scent. Neither seedling bears much resemblance to their parent but one is pretty good and has at least as strong a perfume. It’s a shame deciduous azaleas are so tricky to propagate, it’d be a nice thing to give away.

Holboellia brachyandra doesn’t have quite as strong a perfume but it does carry a little further in my experience. There are times when its vigour gives me concerns, but there’s a fence to cover and trees to climb. It’s a Crûg Farm plant, which will surprise no-one familiar with their catalogue.

Maianthemum racemosum and its variety ‘Emily Moody’ are flowering now. Not a big difference between them, ‘Emily Moody’ came up a couple of weeks later but has now caught up; they’re both starting to flower. ‘Emily Moody’ has in previous years won hands down on scent, I haven’t checked this season yet.

Bells; blue, pink, white and yellow, abound. I suspect that all our bluebells are hybrids between English and Spanish, some close to one species, some to the other. Yellow comes from Uvularia perfoliata. Disporum, Polygonatum and Convallaria will provide me with green and white bells shortly. 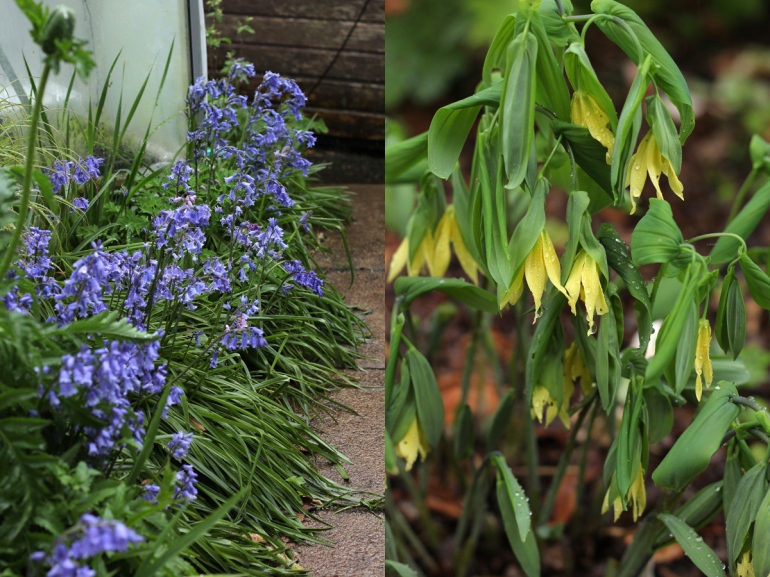 Out from the shady areas Libertia x butleri is putting on the glitz this year. It was poor last year, great the year before that. This is a newly named hybrid between L. chilensis and L. ixioides which sowed itself. I grow both parent species and this spontaneous cross is apparently not uncommon.

A couple of other things warrant a mention. I grow a few Muscari but I think ‘Blue Spike’ might be the showiest and longest lasting. Camellia ‘Minato-no-akebono’ has finished flowering but is keeping things going with lovely new leaves.

I have a few fruit trees in the garden, mostly apples. One tree of ‘Elstar’ produced small scabby fruit in its first couple of years and I am gradually turning it into a family tree by grafting other varieties onto it. This winter saw the addition of ‘Plympton Pippin’ and ‘Tregonna King’ two old west-country varieties, and ‘Meridian’, which is a modern one. They join ‘Holstein’ and ‘Red Windsor’ that were done a couple of years ago and are fruiting already. I also grafted ‘Holstein’ more conventionally onto MM106 to make a normal single variety tree.
Apropos nothing, my grandfather was a nurseryman in Plympton many years ago. There’s a housing estate there now; that’s progress.

And so to garden views. We have scaffolding up and it’s raining. The scaffolding rather spoils one of my usual views but on the other hand it provides a new viewpoint.

Now it’s off to The Patient Gardener, host of the EOMV meme, to see her post and the links to everyone elses.