Two Camellia articles that I am supposed to be writing fall due in October so I’ve been willing it not to arrive since April. Didn’t work, I’d better get writing.
It’s a funny time of year in the garden; part of me wants everything to go on flowering and looking good for as long as possible but another part wants to crack on with moving the tunnel, moving various shrubs, planting bulbs and so on. For those things I need to be able to cut things down and clear some space.

I was in a friends garden today and she had just planted Cyclamen hederifolium seedlings into and area planted with Roscoeas. The Roscoeas are just starting to die down, the cyclamen are slowly leafing out and flowering. As the cyclamen die back in the spring it is intended that wood anemeones will be coming up to flower. Their foliage should have just about died away when the Roscoeas show again next year. Three things occupying the same piece of ground, taking their turn to grab the light. That’s the theory anyway. I’ve been combining spring bulbs with summer performers for years but it’s the autumn/winter that is trickiest, basically the next three months. Keeping the summer stuff going as long as possible is a start. Then there are the plants that do their thing in October. There’s a few of them coming up.

One.
Salvia corrugata. I bought this a year ago and kept it under cover last winter. It’s grown well and I nearly put it in last week when it had its first flower. I’m glad I waited because it’s flowering pretty well now. Too bad it had to fall over before doing so, it means it’s almost hidden from view. We took a cutting in spring so there’s a backup plant to get through the winter but I have half a mind to lift this one and replant it in spring; I’m not sure it will survive the winter. 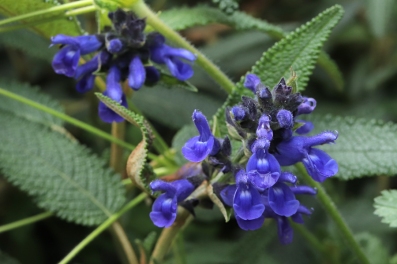 Two.
Miscanthus sinensis ‘Septemberrot’. I wish my Miscanthus ‘Ferne Osten’ would take a leaf out of ‘Septemberrot’s book and learn to stand up straight. This one never falls down and flowers well at 4-6 feet. With the right weather it might even put on some autumn foliar tints but that doesn’t happen often in Cornwall. 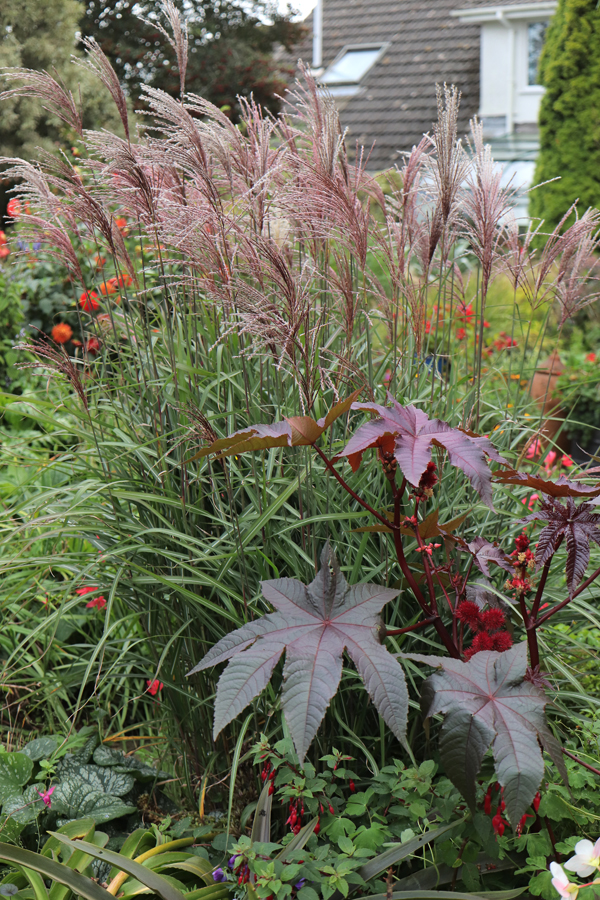 Three.
Aster ‘Purple Dome’ or if you prefer Symphyotrichum novae-angliae ‘Purple Dome’. Confusingly there is a novi-belgii variety with the same name. Ignore all the other stuff in the picture and focus on that beautiful rich purple in the middle.

Four.
Cyclamen cilicium. The Cyclamen Society had a stand at the Cornwall Garden Society Spring Show this year. It came after most of the cyclamen had finished flowering but they had brought along a lot of little plants with good foliage and I was persuaded to buy two. I think I may have killed the other one but this one, still in its pot, is up and flowering. As well as being beautiful it has an exquisite scent but you’re going to have to take my word for that.

Five.
Hosta ‘Raspberry Sundae’. I saw this Hosta at the nursery where I bought the Salvia corrugata but decided to let them overwinter them, they were quite small, and went back this spring to buy a couple. The slugs have done their thing but hopefully its quality shines through. Quite a rich purple flower and a striking variegation enhanced by the speckles of purple that spill over from the petioles. I’m hoping for much better next year.

Six.
x Amarine tubergenii. A hybrid between Nerine and Amaryllis, this is like an outsized Nerine. I have it in a large pot, out the front in full sun. The flowers are around 2 feet tall. I have a few Nerines flowering and just one Amaryllis, they don’t seem to have liked the 2018 drought, which I find a little surprising. One day I will put the Amarine in the garden but it’s quite useful to be able to hide it away until it’s about to flower.

I had two seed orders arrive yesterday to add to the four bulb orders that have come in the last couple of weeks. I wonder if I could now get to the end of the year without buying any more seeds or plants. It’s only three months, how difficult could it possibly be?
Today looks like the morning might be usable, afternoon a washout. I have shredding to do, having cut down most of the Fuchsias in pots yesterday.
Links to other sixes at The Propagator, as reliably as ever. Enjoy your weekend.