Oh dear, more rain. It was supposed to be dry today. Friday rained all day. At this time of year a rainy day can be an expensive day. I sat at my computer, browsing Parkers catalogue, Peter Nyssen’s catalogue, then Potterton’s, Avon Bulbs and Ron Scamp’s Daffodils, just to mention the ones with whom I placed orders. They came on top of a new glasshouse ordered earlier in the week, a replacement soil warming cable for the propagator, a book on Geraniums. I haven’t started on seed orders yet.

At least I’m not on my hols, rather I’m on the permanent holiday that is retirement. Not so meme host The Propagator, valiantly posting and hosting while on vacation.

I have an ongoing project in the shape of felling our Chamaecyparis ‘Little Spire’, now a behemoth of a thing that is way too big and dark and dingy and it’s sucking dry an ever expanding area of ground each year. It has to go. I’ll include it in a six when it’s gone. I’m taking it down a car load at a time, it then goes to the council tip. I attempted to include one of my fingers in the latest load, which was messy and has set me back a bit, and I’m still only on the smaller branches. In a contest between a Silky saw and a finger there’s only going to be one winner. It’s my typing finger; as you can see, it still works.

One.
I ran out of potting compost, necessitating a trip to the garden centre, where, surprise surprise, I spotted a couple of things I didn’t need and have no room for but which mysteriously found their way into my trolley (Why did I take that trolley when I had no intention of buying anything?) This was one of them, Eucomis ‘Aloha Leia’.

Two.
Helenium ‘Chipperfield Orange’. This has done tolerably well this year, in spite of being well within the root zone of the aforementioned big conifer. Just beside it is Helenium ‘Monique’ which is in a very bad way, black stems and leaves, looking very sickly. Maybe it has whatever killed all my H. ‘Sahin’s Early Flowerer’ a couple of seasons back. I should dig it out and get rid of it. ‘Chipperfield Orange’ is tall but self supporting, pretty good but smaller flowers than some.

Three.
Acis autumnalis. That this is now flowering rather confirms the slide into autumn. This has come up reliably every year for several years now, which given its diminutive stature and extremely delicate appearance always seems little short of a miracle. I’ve ordered a few more to make the clump a bit bigger.

Four.
Hydrangea macrophylla ‘Izu-no-hana’. This is a more open, natural looking plant than the double hydrangea I included two weeks ago. That was bred in captivity to be compact and covered in flowers for months; this one was found growing in the wild in Japan and is a lacecap which seems variable in the number of sterile, showy florets it has. I think in better growing conditions you get more sterile florets (the showy outer flowers) to the point it almost forms a complete head of them. I had one in a pot which had flowers in a very pretty shade of pink but in our acid garden soil it is blue.

Five.
Fuchsia of the week is ‘Loeky’. This is a pretty standard bush fuchsia, not regarded as hardy though we haven’t tried it in the ground yet. I love its wide skirts and free flowering nature but I really must make an effort to grow it better so that it performs to its best. The flared corolla can open almost to horizontal. 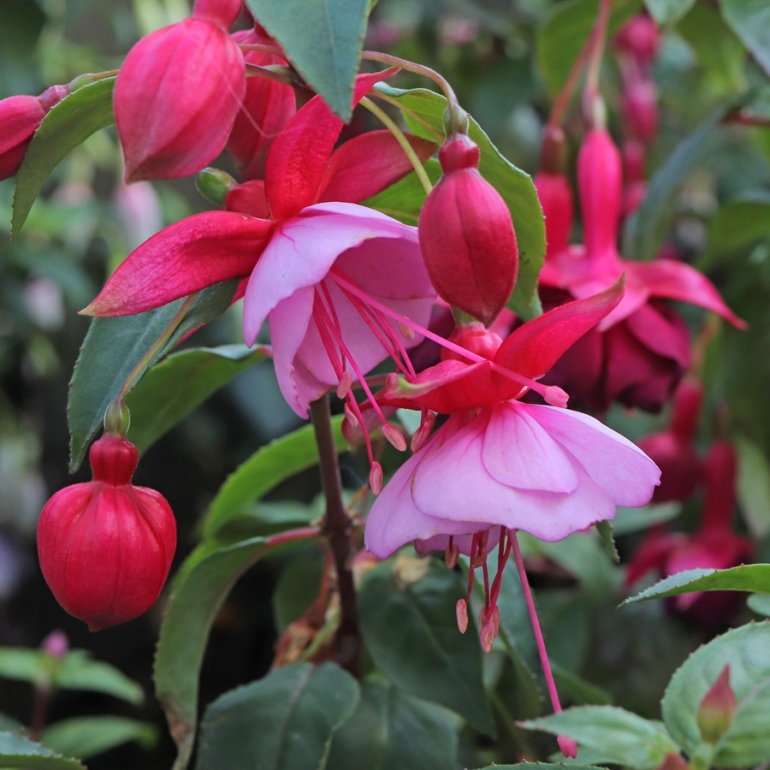 Six.
About a month ago I was taking pictures galore of our bog garden which was a mass of Astilbes and Filipendula in flower; except for the two Astilbes that are flowering now, one at each end of the bed. It seemed a good idea to spread the flowering season but it wasn’t really. The two flowering now look a bit forlorn and left behind and the display a month ago would have been even more impactful if these two had been flowering then. Perhaps I should replace them, I’d have no difficulty finding a home for them, though this one, which is Astilbe ‘Delft Lace’, is a real beauty with striking dark foliage and I rather want to keep it.

I was going to go up to the Rosemoor Flower Show yesterday, but chickened out. Today and tomorrow are out, the car is in use elsewhere. I really feel for the stall holders who must have had a pretty miserable day. It no doubt saved me quite a bit of money, and I’m not talking about the cost of getting there.

The horses have nothing to do with anything; I recently happened upon the picture, which I took a few years back, and it was just the size I wanted for a featured image. Not wanting to get soaked to get a relevant picture, it’ll do just fine. I went out this morning and took a picture of raindrops on grass; I’ll shove it in down the bottom here. It’s dull.