After this there’s just two more sixes to go and we’re into a new year. It’s cold and there’s not a great deal happening in the garden, though I have camellias flowering, three sorts outside and four in pots. Some I have used before and don’t want to repeat for now. For two of them it’s their moment in the spotlight.

One.
Not for the first time I have learned something when looking up background for an SoS post. What I learned this time came as a considerable disappointment, but that’s life.
Camellia grijsii is a species (most Camellias you see are hybrids) and has small, sweetly fragrant flowers in mid to late winter. Outdoors the scent will carry a good distance. Years ago I bought a plant of a variety of the species called ‘Zhenzhucha’ from a French nursery. I don’t remember whether I saw a description of it then, but cultivars of obscure species are rare, I probably just bought it. When it eventually flowered, it didn’t look any different from the species but I kept it and it’s in the garden. Today, finally, I looked it up in the Camellia Register and it turns out it should have miniature formal double flowers; what I have is just the regular species. I’m more disappointed to learn that it’s wrong than I was when I first saw it flower; then I just thought it was no improvement on the species, now I know that it’s not what it should be, which seems worse. Anyhow, this is Camellia grijsii, in a pot, in the conservatory, smelling lovely to me, offensively strong to Sue, like Philadelphus to Jane. 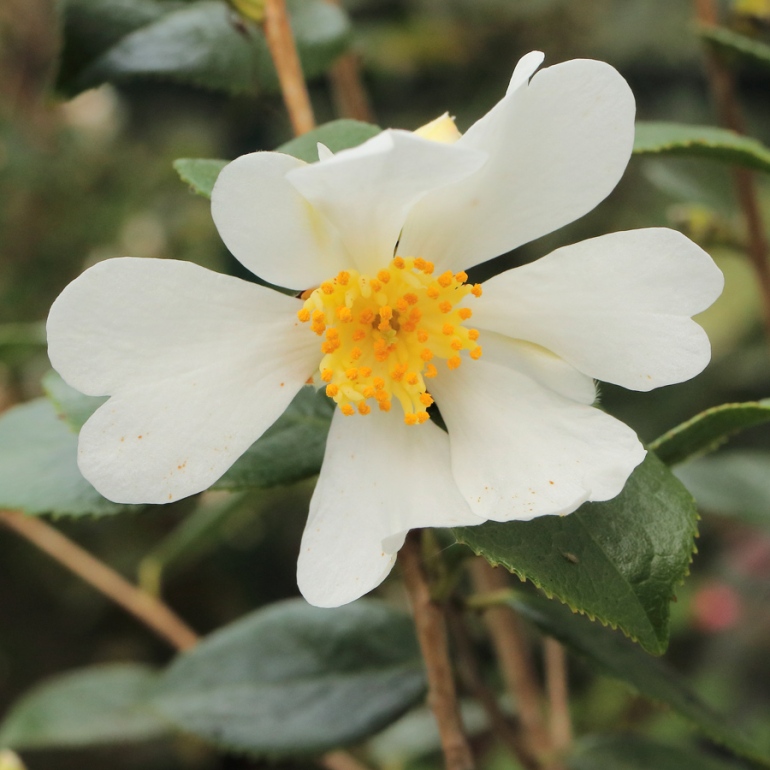 Two.
Cyclamen coum. This usually flowers well after Cyclamen hederifolium but this year it started very early and has carried on over a long period without ever being outstanding. It seems happy enough, those are seedlings at bottom right. I much prefer the fully hardy cyclamen species to the hybrids that seem to be all that most garden centres offer. 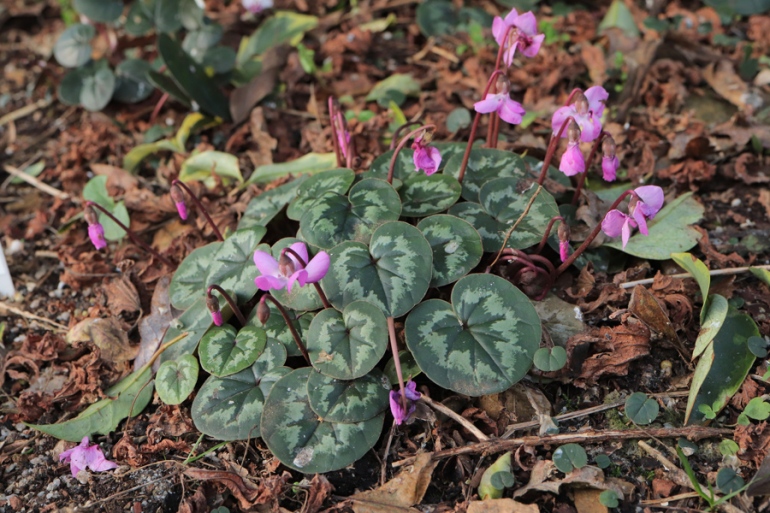 Three.
Viburnum tinus. This was a cutting from a plant in my parents garden in Surrey that I must have taken nearly thirty years ago. It was in their garden when they moved in, in 1956 and from its size and location had probably been there since around the time the house was built in 1900. It’s quite different from the forms you see in garden centres now, with big, roundish, bullate, lustrous leaves and strong upright open growth. I keep it more for nostalgia than any real merit it possesses. It’s flowering now, not much else is. 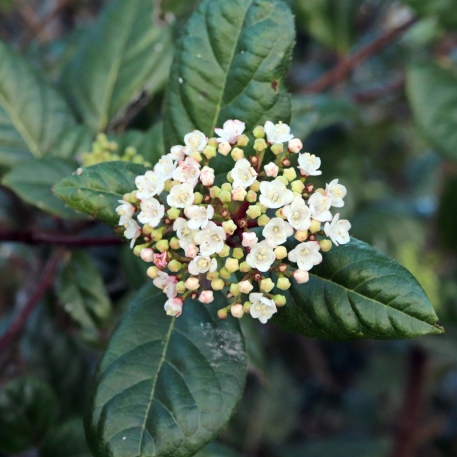 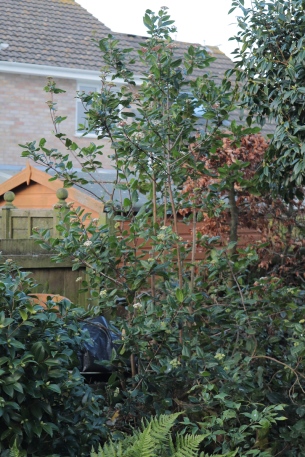 Four.
Camellia ‘Sweet Jane’. When people get jaded with ever bigger and gaudier flowers on hybrid plants they often turn back to the species for their simplicity and elegance. Hybrids between species or between hybrid and species can be real winners, combining the best qualities of both. ‘Sweet Jane’ is a cross between C. japonica ‘Edith Linton’ and C. transnokoensis, raised in Australia. I’ve found it to struggle in the ground but I know someone near here who has a good one in their garden. The flowers are about 6cm across. I keep taking its picture, here’s just two. 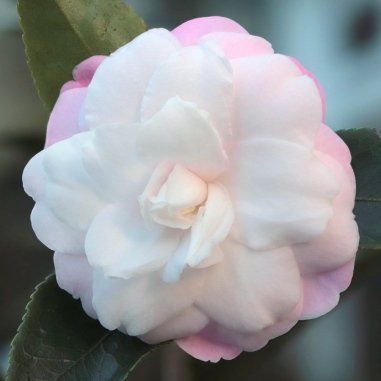 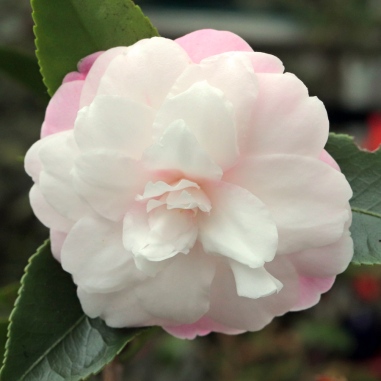 Five.
Pinus parviflora cv. There must have been a time when I knew what variety this is, but I seem to have lost it. There are hundreds, mostly with Japanese names, very few available here. The slow growing ones make very good pot plants, mainly because they are very tolerant of neglect. This one is a metre tall and at least twenty years old. It has been next door for a couple of years but I brought it back as the “For Sale” sign is now up. 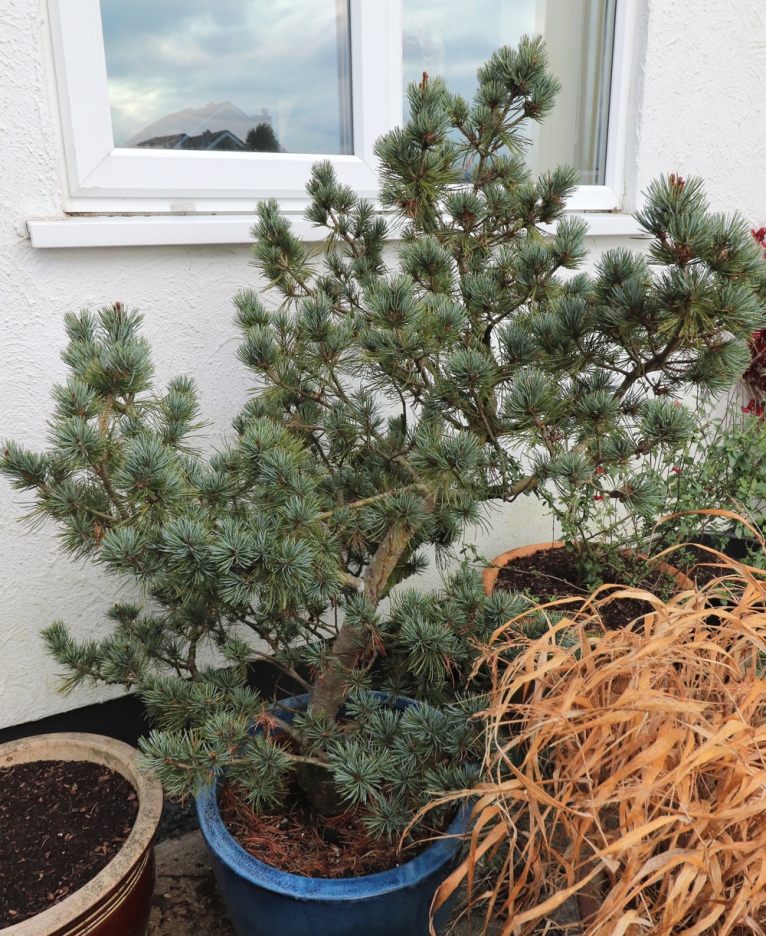 Six.
Epimedium grandiflorum ‘Lilafee’. I was wandering around the garden with my camera, fairly desperate to find something to point it at, when I spotted this. The light is so dull in mid December it’s easy to miss something colourful, even when it’s making an effort. The photo looked pretty dull too so I did a bit of tweaking to “improve” the image. Is it all about accuracy or is it all about the picture? I’m sure I don’t know. 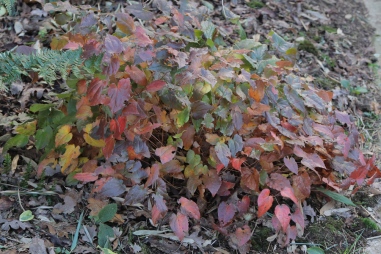 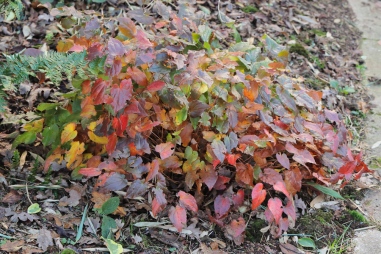 This morning it’s raining but as often happens, compared to most of the country it’s mild. I have thousands of Camellia photos to sort out, enough to keep me going for months even if I didn’t keep adding to them. Can only do it for so long before I start making mistakes. It’s an indoor gardening job of sorts though.
There’ll be lots of sixes to read, at least that’s today sorted. Check out The Propagator for the links.