Well, that was a week that was. The thermometer hit -3°C on Monday night. My Dahlias were blackened, top to bottom, just like it says in the books. In ten years or more of growing Dahlias, it’s the first time I’ve cut them down after they’ve been frosted. In previous years I’ve just picked a moment when I got sick of looking at them getting tattier. Fuchsias aren’t looking too clever either, though I did manage to get the non-hardies under cover so they’re fine.

I’ve often thought how nice it would be to have a nice clear line to demarcate the seasons; I’ve changed my mind, it isn’t nice at all; flowery one day, mushy and malodorous the next.

One.
Moving swiftly on. I started the week with destruction, felling a pine tree that we didn’t think was earning its keep. It was up against a thorn tree and completely one sided, too near to the conservatory, impossible to grow anything under it and it never grew like the picture in the book that made me want it in the first place. That’s my set of justifications for getting rid of it. Oh, one more; it’s my garden and I’ll do as I please. The idea was to plant another winter flowering Camellia there. so we could enjoy it in winter from inside the house. I think I’ve changed my mind about which Camellia, it’s likely to be ‘Show Girl’ not ‘Tanya’, which was lovely, but not for long enough. RIP Pinus koraiensis ‘Siver Ray’. 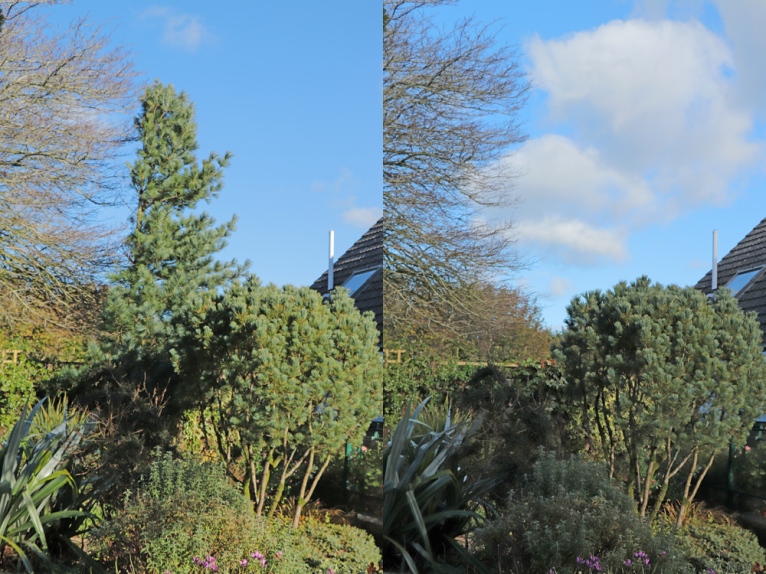 Two.
Trees for small gardens has been a mainstay subject for garden club talks and magazine articles since gardening began. The Propagator himself, no less, posed the question on Twitter in the week. I suggested bamboo, as I often do. Trees that never get very big tend to be very slow, often shrubs really, that become trees eventually. Most trees are deciduous or if evergreen, profoundly dull. Most trees will at best give you flower and fruit, perhaps autumn colour; they are “doing their thing” for only a few weeks a year. My bamboo is evergreen, with light green leaves on bright yellow stems. It had reached its present height of about 4.5m within four years of planting and will never get taller. It has spread to cover around 3 x 1m in fifteen years or more but could easily have been kept to a much smaller area. It needs thinning, which will yield me usable canes, let light and wind through and show off the stems better. I can think of two downsides, an unpronounceable name, Phyllostachys aureosulcata ‘Spectabilis’ and a high price for a half decent plant. Beware cheap bamboos, they’re the spreading ones that produce lots of propagation material. 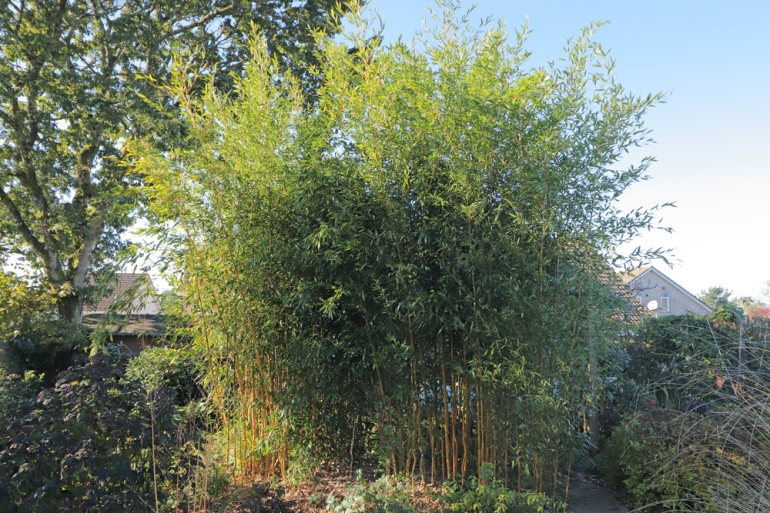 Three.
Camellia sasanqua ‘Paradise Little Liane’. I have three sasanquas out the front of the house. Just behind them, at the foot of the front wall of the house, are potted Agaves, Sempervivums, Echeverias and Aloes. In front of them is Chamaerops and Yucca. Sun lovers all. There are plants of this Camellia at Mt Edgcumbe and Trewithen, both in shade, neither ever flower. I was at a talk about woodland gardens last weekend, where sasanquas were being talked of as woodland plants. Some might be OK, most will do better in sun and some demand it. ‘Little Liane’ is small, with very small leaves. It’d be good in a pot if you didn’t have acid soil and could find a nursery that sold it. 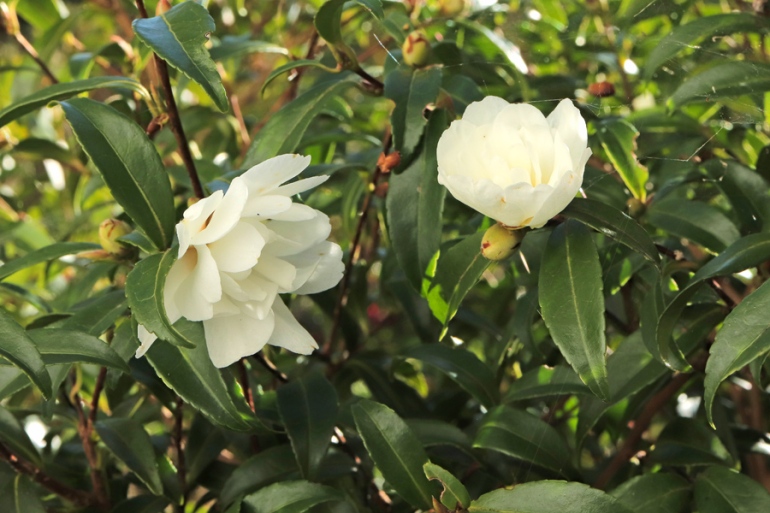 Four.
Both of our neighbouring houses are empty so I was able to stand in one neighbour’s garden and take a picture pointing the camera at the other neighbour’s front window. I may not get such opportunities for much longer. Our Yucca gloriosa ‘Variegata’ is flowering again and the European fan palm, Chamaerops humilis, ain’t looking too shabby either. Camellia ‘Little Liane’ is at bottom right. 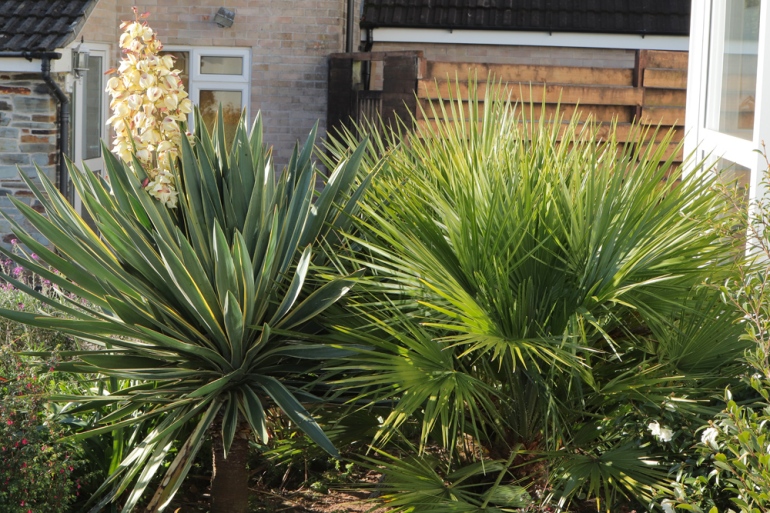 Five.
I am inordinately fond of Hakone grass in its various forms. They’re elegant, often colourful, not invasive, by seed or runners and tolerate shade. The best thing about them is their autumn and winter colour. This one is Hakonechloa macra ‘Nicholas’, the first to start to turn colour. I have it in a pot at the back of the conservatory where it gets no direct sun but is doing a fine job of brightening a dull spot. I pulled it out into the sun to take its picture and it looks even better, but I have lots that get some sun and it’s back where it was.

Six.
Most of the hardy Fuchsias in the garden had both foliage and flowers turned to mush by the frost on Monday. One that I was surprised to see come through relatively unscathed was ‘Lady in Black’. This is very like ‘Lady Boothby’, widely marketed as the climbing Fuchsia, perhaps with a darker corolla. If we get nothing colder than we’ve had so far, I’m hopeful it will not get badly damaged over the winter and will cover this panel of my archway next season. 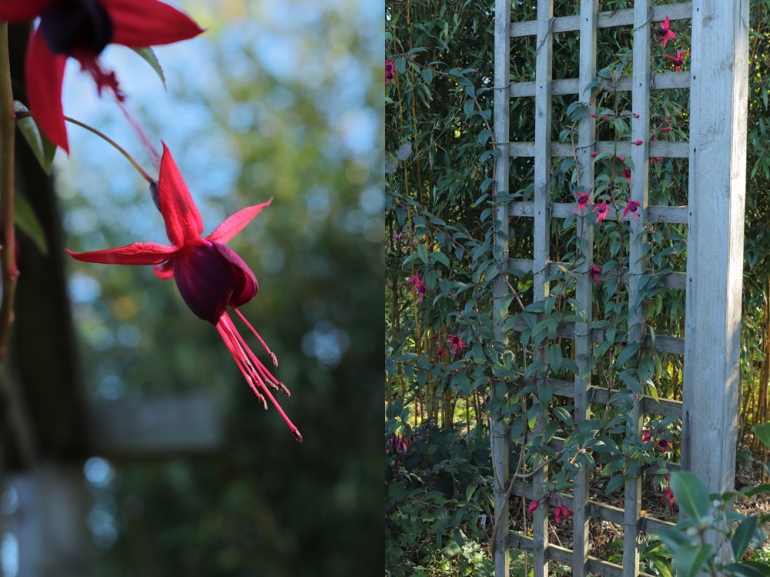 Yesterday morning, at 8:22, I took a picture from upstairs and reckoned that if you’d marked around the shadow cast by our house, you’d have outlined our back garden. All around was sun, within was shadow. Things did improve as the day went on, but in general, it’s a much shadier garden in winter than summer. Cornwall might be the mildest part of the UK but I still look forward to the days getting longer again.
I’ve cut down the Dahlias and some perennials that were finished, Muscari are coming up, tulips in pots are just about to break through. There will be Camellias. 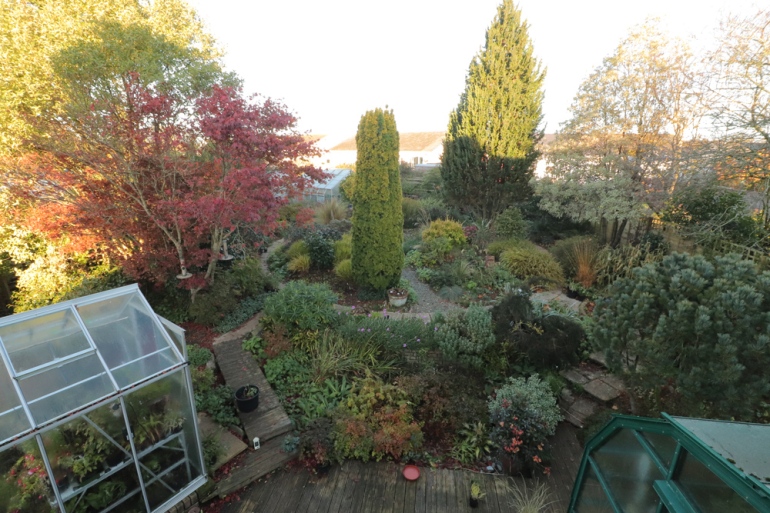 There will also be lots of lovely blog posts to read. As gardens shut down for winter it gets harder but I can’t wait to see what imagination and quirkiness bring to the table this year. Talking of which, I’m off to see what our host The Propagator has showcased this week and to follow all the links from there to the rest of the SoS community.