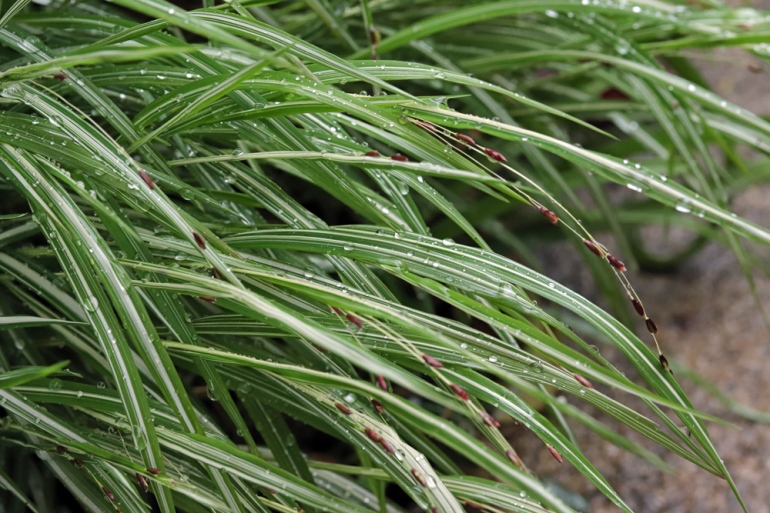 So impressed was I with the Hardy Plant Society’s plant sale in Truro last weekend that I have now joined the Hardy Plant Society. Who knows, by next year I might be back there as a seller. I nearly added “rather than a buyer” but I bet most of the sellers spend as much on other peoples stalls as they take on their own.
This weekend sees the Plant Heritage Spring Fair at Rosemoor; damn, more expense. While the OH is snapping up lilies for a quid at Morrisons, I’m trying to support the British Nursery Industry, well the little guys anyway.

One.
Chelidonium majus ‘Flore Pleno’. Well this one cost me nothing, a gift from another gardener. It seeds around freely, so lends itself to being given away. I planted one last year, I now have two. I worry that it might spread exponentially and that I’ve let loose yet another monster. The single flowered form grows in the hedgerows hereabouts, looks a bit like a buttercup. It may be native but was probably introduced by herbalists, who used its latex, which is orange and toxic, to treat eye problems and warts. There is no way I’d let anyone near my eyes with something like that. 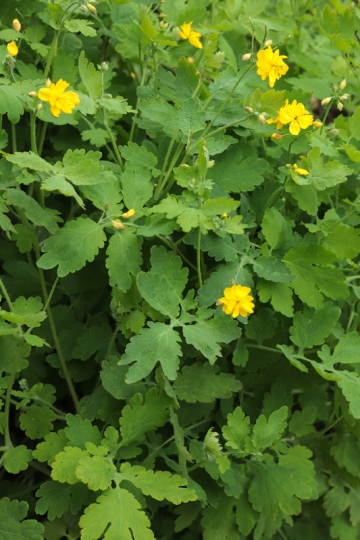 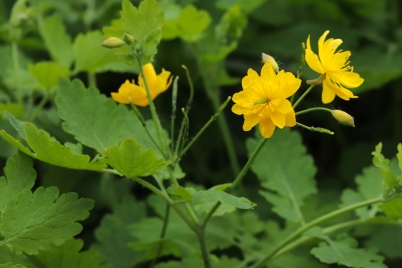 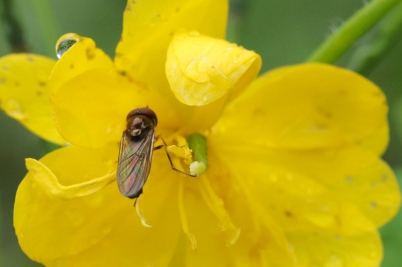 Two.
Holboellia brachyandra HWJ1023. Another Crûg plant, collected by Wynn-Jones and Dan Hinkley on Fan-si-pan, North Vietnam’s highest mountain. Mine doesn’t resemble the description in Hinkley’s book and I think is probably seed raised from fruit on their first generation plants. Mine doesn’t set seed, not having another plant to pollinate it. It is monoecious, with separate male and female flowers on the same plant. The females are slightly larger, with sepals (it being sepals not petals that are its ornamental feature) up to 2.5cm long, barely a third the size that Hinkley claims. They are very pale lilac in colour, the males a little darker and more bell shaped. There is quite a strong perfume, pleasant to my nostrils but please don’t ask me to be your guide when it comes to scent. Of Cantaloupe melon, according to one writer; I wouldn’t know, I don’t do melons.
There are very few evergreen climbers; if you want one, this has to be one to consider. 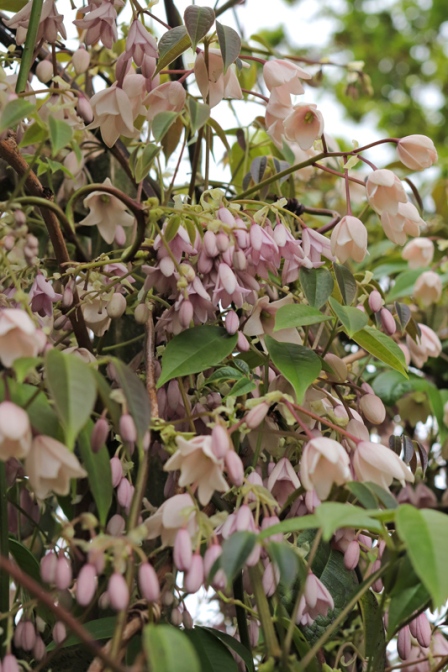 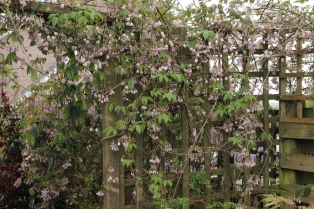 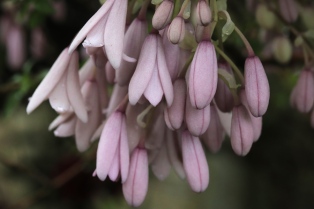 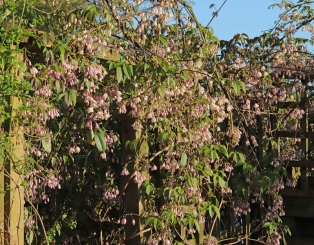 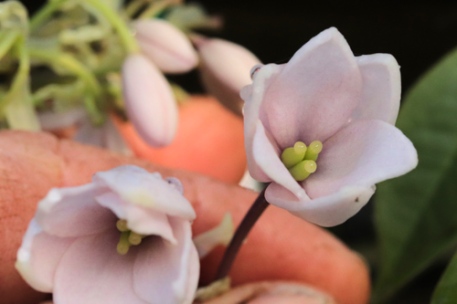 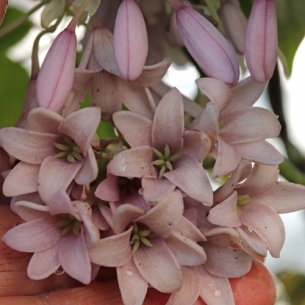 Three.
Maianthemum racemosum subsp. amplexicaule ‘Emily Moody’. I don’t know what sets ‘Emily Moody’ apart as a selection. Compared to my other form of Maianthemum racemosum (was Smilacina racemosa) it is taller at about 75cm, has broader leaves and is about a week later in flower. Last year it seemed to have a much stronger scent, this year they seem much the same. Like Lily of the Valley, in any event. This is a robust, easy, reliable perennial that wants light shade and a bit of moisture. Slugs don’t seem to touch it, which in this garden is gold dust. 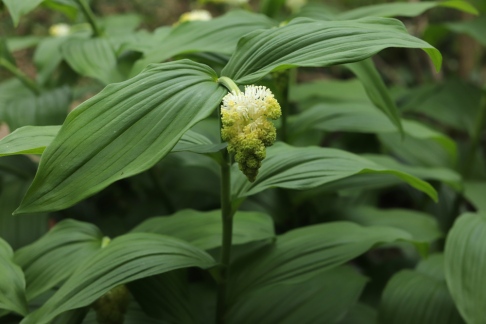 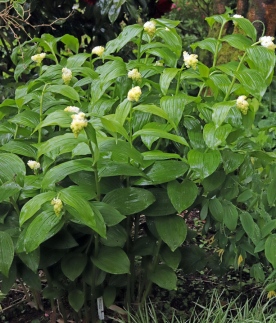 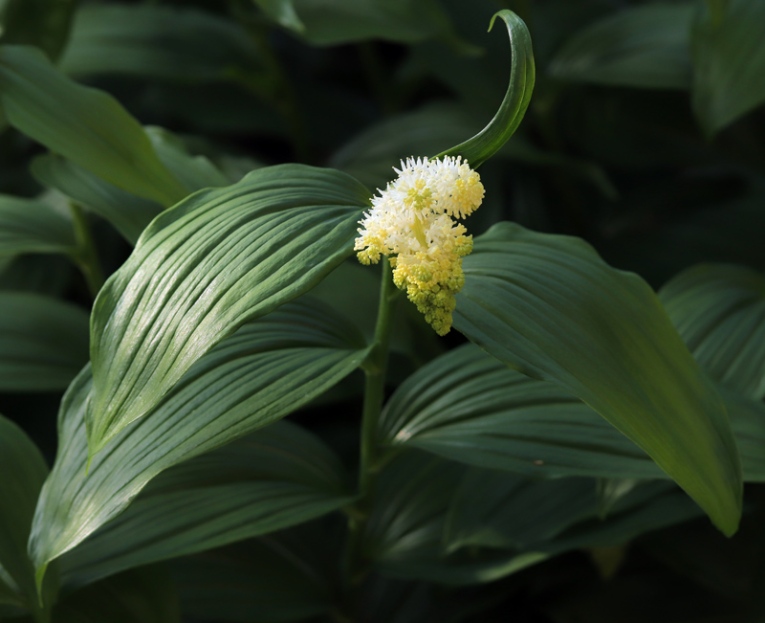 Four.
Corydalis ochroleuca. For many years we had a single plant of this. It would live two or three seasons and die, having produced a single self sown sproglet somewhere near. The cycle repeated many times. Now we have a few more and we get carpets of seedlings very few of which get to flowering size. It flowers for months, as well as having pretty foliage. We have a very nice clump growing right underneath our Taxus baccata ‘Standishii’, on the shady side. It chose to grow there, if I’d have planted it there you may certain it would have died. 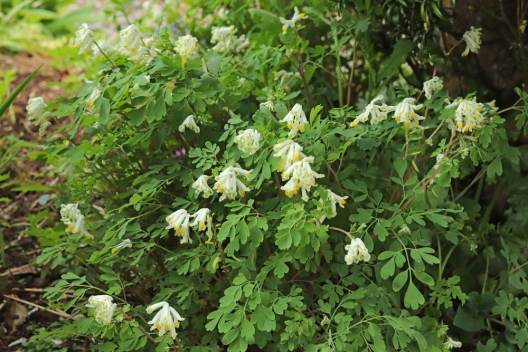 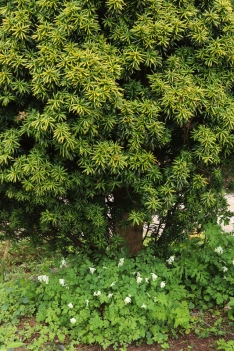 Five.
Melica uniflora ‘Variegata’. This is a delicate looking small grass happy in woodland conditions. It spreads very slowly and looks pretty jaded by late summer. At its best in the spring I wonder why I don’t have more of it. 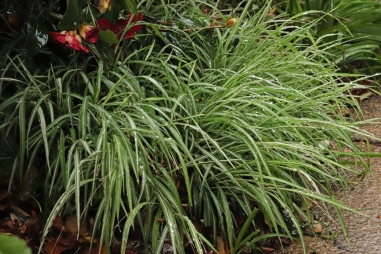 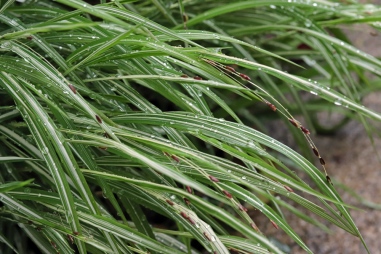 Six.
Disporum bodinieri. A HPS sale purchase. I need to be careful not to get any more like this; as much as I might like them, I now have four that are really rather similar. There’s a world of different stuff out there and only so much space for me to put it in. 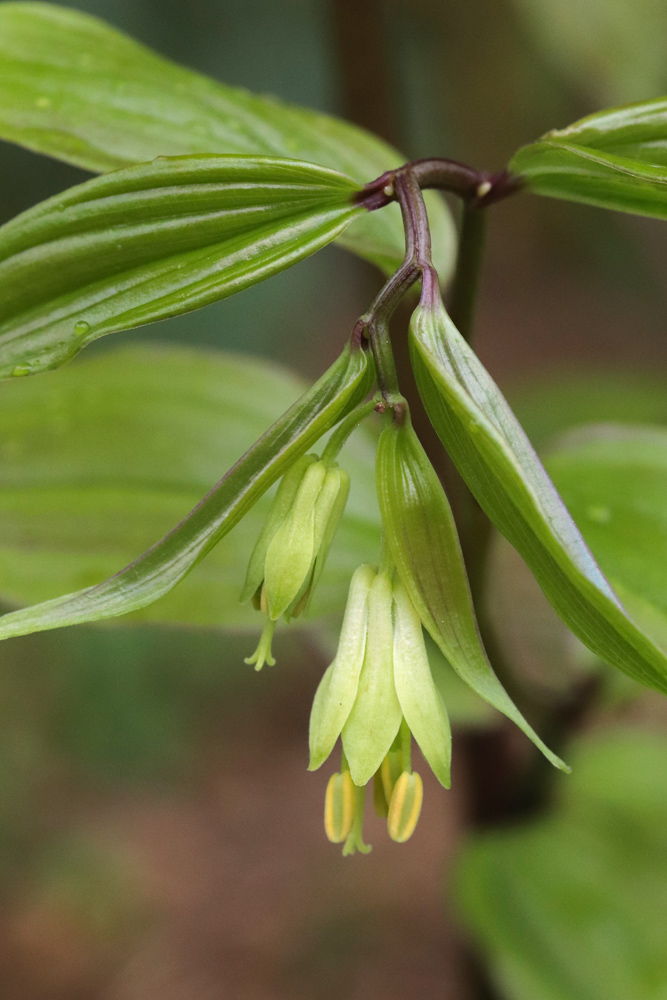 So that’s another six. At this time of year there is so much happening and happening so quickly, I want to do another six on Sunday. I’ll stick them on the end as outtakes. It means there’ll be loads happening in everyone elses gardens too, so head for comments on The Propagator’s posting for links to many more sixers.