Saturday again! Saturdays seem to come round quicker than the other six days. I’m finding things to put into my six but struggling to find anything diverting to say about them. Well, some of them.
Six on Saturday is a meme hosted by ThePropagator, who will have six of his own plus links to several, if not more, other sixes from around the world.
Here are my six garden snapshots for this week.

One.
Honey Fungus. Armillaria mellea or gallica, probably. All too much could be said about this. We had a Eucalyptus felled a couple of years back after a large chunk split off it. Now it has a ring of toadstools all round it. The RHS are doing a honey fungus hunt at the moment, I think I’d better report my outbreak. It’s something we’ve had the odd outbreak of over the years, especially after removing a leylandii hedge and an Acer. It doesn’t seem to be too aggressively pathogenic, thankfully, and there isn’t much we could do about it if it were.

Two
Parthenocissus henryana. I wanted to include this because it is producing some autumn colour and with gales forecast for Monday, it wont be around for long. It’s on the fence between us and our neighbour and has been there so long I can’t remember if it’s planted his side or ours. It’s much more manageable than the other Parthenocissus species people grow and has a very nice leaf even when it’s not doing its autumn thing.

Three.
Fuchsia ‘Olga Storey’. The Fuchsias seem to be having a final fling for the season. This one stands out because it has really bright yellow leaves with red veins and it seems to be immune to rust, gets very little leaf spotting and is untouched by capsid. For a hardy, the flowers are large and showy too, though it’s not the most generous flowerer. 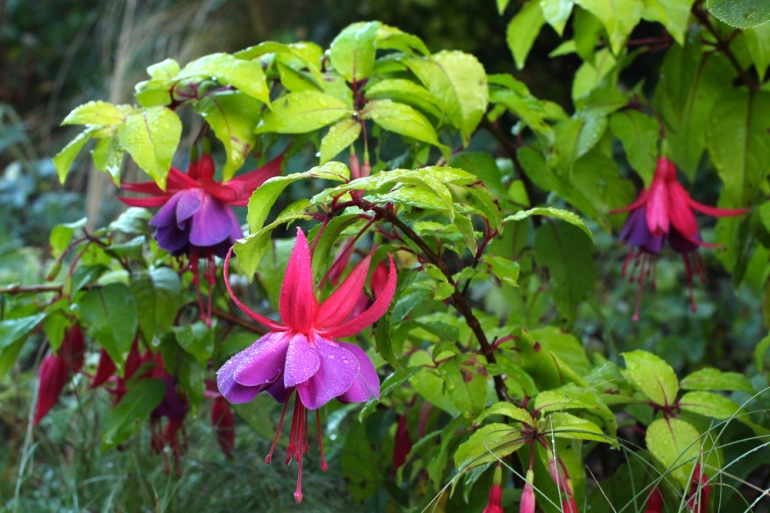 Four.
Sue’s glasshouse. This glasshouse is off limits to me except for the annual ritual of moving the big pots of succulents, mostly Echeverias, out to the front of the house in spring, then putting them back in here for the winter sometime in October. There is never any room because all the space made in the spring gets filled up with more plants during the summer.
I see pictures on blogs of empty glasshouses, washed down and waiting for plants to be moved in for the winter. I can dream.

Five.
Camellia x williamsii ‘Debbie’. ‘Debbie’ is a popular camellia which grows rather vigorously. Ours had poked it’s head above the neighbour’s fence and got blown over as it was top heavy. I tried to support it for a couple of years, not very successfully, so I cut it back hard in the hope that the roots would catch up with the top growth. This year the regrowth was 2-3 feet in length. Camellias typically produce an early flush of shoots that are 3-6 inches long and on which the flower buds form. If they are young and vigorous they will then make a second flush, from about July onwards, which can be 2 feet or more long and on which there are no flowers. By October the flower buds are easy to see and if it is not required, the extension growth can be shortened or removed altogether, keeping the bush much more compact and allowing the flowers to be seen better.

Six
Blechnum tabulare. A friend of mine tipped me off that one of our local garden centres had plants of this magnificent fern a few years back. I got the last one, in a 3 litre pot. It’s now in a 10 litre pot and needs potting on again or planting out. Online opinion seems divided about how well it does outside, it being borderline hardy, but I think I’ll move it in for this winter and plant it in the ground in spring.

See you next week.